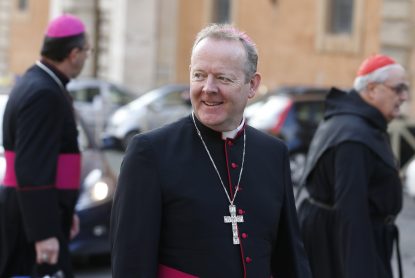 Archbishop Eamon Martin of Armagh, Northern Ireland, is pictured at the Vatican Oct. 16, 2018. Archbishop Martin has joined with leaders of other Christian traditions in appealing for “prayerful support” for an Oct. 21, 2021, service to mark the centenary of the division of the Island of Ireland. (CNS photo/Paul Haring)

DUBLIN (CNS) — Archbishop Eamon Martin of Armagh, Northern Ireland, has joined other Christian leaders in appealing for “prayerful support” from congregations for a service to mark the centenary of the division of the Island of Ireland.

The ceremony is due to be held in Armagh, Northern Ireland, the country’s ecclesiastical capital, Oct. 21, and was due to be attended by Britain’s Queen Elizabeth II and Irish President Michael Higgins.

However, Higgins has now pulled out of the event, claiming that it had been “politicized.”

This year marks the division of the island of Ireland — known as the partition — into two separate states, a mainly Catholic state independent from Britain on the southern part of the island and a predominantly Protestant state with a large Catholic minority in the northeast, known as Northern Ireland, which remained part of Britain.

The partition brought an end to the 1919-1921 Irish War of Independence, in which some 2,300 people were killed. However, it was opposed by many Irish nationalists, who rejected the division of the country and lamented the discrimination and sectarianism in the new northern state, where Catholics were subject to immediate pogroms and denied equal rights.

In a joint statement, the so-called Church Leaders’ Group — which brings together the Catholic, Anglican, Methodist and Presbyterian traditions — urged what they describe as “prayerful support” for their service of reflection and hope.

“As church leaders, we have been saddened by the polarized public commentary around our service of reflection and hope,” they said.

“The tone of the public debate has shone a light on the societal wounds we wish to reflect on in this service. We wish primarily to gather in prayer for healing of relationships and, in doing so, to demonstrate a renewed commitment to working together for peace, reconciliation and the common good,” the statement said.

The church leaders’ statement added: “We, of course, understand that not everyone will feel able to participate with us in this service, but for those who do, particularly in our local churches across this island, we wish to clarify in this statement the context and original vision for the service and invite people to join with us in prayer and reflection.”

Higgins’ decision to reject the invitation was welcomed in the Irish Republic, with a newspaper poll saying some 81% of people said he was right not to mark the centenary of the creation of Northern Ireland. However, unionist leaders in the north, who want to remain part of the United Kingdom, criticized the move, saying it lacked an appreciation of their identity.

The queen is still expected to attend the ecumenical ceremony. However, the Irish government has not decided if it will be represented following the president’s decision.

Even the use of the term Northern Ireland is controversial with many Catholics, who describe themselves as nationalists and want to reunite Ireland as one country. Many prefer to use the term the “North of Ireland.”

More than 3,500 people were killed in the 1968-1998 sectarian conflict known as The Troubles. It came to an end with the signing of the Good Friday Agreement, which committed all parties to achieving constitutional change by exclusively peaceful means and set in place a future mechanism to permit referenda on both sides of the border on Irish unification. 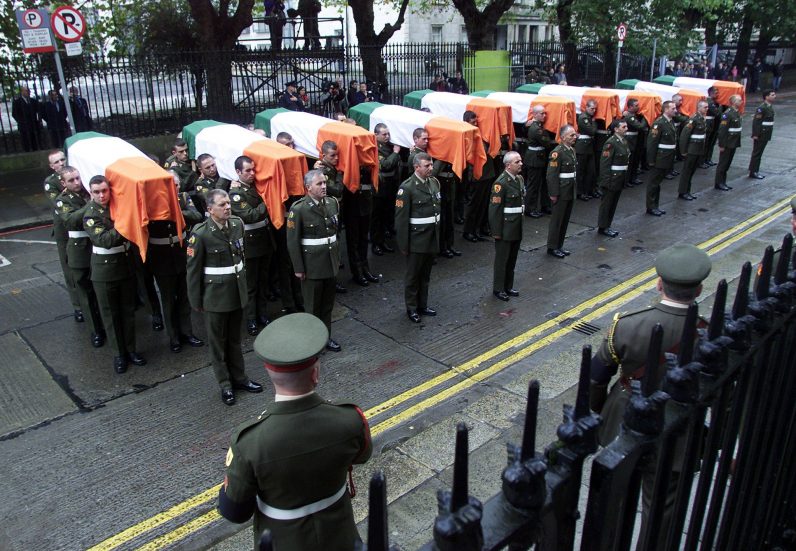 Irish Army soldiers prepare to carry the coffins of Irish volunteers executed during the Irish War of Independence into Dublin’s pro cathedral for a Mass Oct. 14, 2001. Archbishop Eamon Martin of Armagh has joined with leaders of other Christian traditions in appealing for “prayerful support” for an Oct. 21, 2021, service to mark the centenary of the division of the Island of Ireland. (CNS photo/Paul McErlane, Reuters)

NEXT: Pope to begin synodal process with Mass in St. Peter’s Basilica