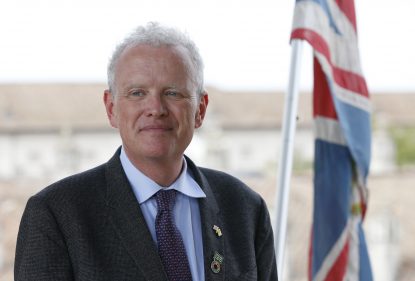 Christopher Trott, the new British ambassador to the Holy See, is pictured at his residence in Rome Sept. 27, 2021. He spoke to Catholic News Service about the importance of religious leaders coming together in Rome for an Oct. 4 event in the run-up to the November 2021 U.N. Climate Change Conference in Glasgow. (CNS photo/Paul Haring)

ROME (CNS) — The two nations co-chairing the U.N. Climate Change Conference are counting on the persuasive power and moral pull of religious leaders to help convince the world’s governments to set high standards in their commitment to mitigate climate change.

He told Catholic News Service Sept. 27 that he hoped a united appeal will remind political leaders “that actually the world is watching and that this matters not just in the halls of power, but it actually matters to the whole of the world’s population,” since more than 70% of the global population identifies with a religious belief.

The meeting, “Faith and Science: Toward COP26,” was scheduled for Oct. 4 — the feast of St. Francis of Assisi, patron saint of ecology — ahead of the Nov. 1-12 U.N. summit in Glasgow, where parties from 197 nations are meant to find agreement on how to tackle the threat of climate change. The United Kingdom was chairing the COP26 presidency, in partnership with Italy.

Trott said his predecessor, Sally Axworthy, and others who started planning the interfaith meeting saw the real impact Pope Francis made with his strong statements on the environment and his encyclical “Laudato Si’,” ahead of the COP21 in Paris in 2015.

The pope’s voice made a difference, he said, because the targets set in the Paris Agreement “were slightly more ambitious than they might have otherwise been … and we hope that same thing will apply again” with the added weight of people representing all the world’s major faiths as well as scientists.

“There is a recognition among scientists that the world needs to do something in response to the changing climate in order to stop the situation from getting worse, but at the same time that vision of protecting the planet is something that is central to an awful lot of faiths,” he said.

Trott said they hope political leaders will understand that the voices of religious leaders matter and that they will not want their constituents to see them as ignoring or acting against “the leaders of the faith that their people adhere to.”

“So, we hope that there will be a sort of moral pressure on them to compromise when the negotiation gets tough,” he added.

The other reason faith leaders are important, he said, is they can communicate back to their congregations how to understand the challenges the world is facing, and the kind of responses needed.

Religious leaders also can help clear up the misinformation about climate change, he said.

Faith leaders are often “better equipped” than governments to address the skepticism, explain why specific action is needed and “recognize that we are in a potential crisis, a kind of existential crisis, a kind of crisis that’s hard immediately to quantify but that we are facing this challenging moment and we have an opportunity now to respond to that moment, that we won’t always have,” Trott said.

“It is about not selling the idea of climate change,” he added, “but selling the idea that we need to respond in our individual lives as well as at a governmental level to this crisis that I think makes the message of the faith leaders so powerful.”

With a long career in diplomatic posts and missions in Africa and Asia, Trott said he witnessed the devastating effects of climate change most starkly when he briefly served as high commissioner to the Solomon Islands in the South Pacific.

“I went with a television crew and representatives of the Anglican Church to an island which had been the childhood home of an Anglican priest who is now based in the U.K. and that island is now underwater; there is one house left on that island” where, decades before, a few hundred people had lived, he said.

Rising sea levels, as well as desertification across the Sahel in Africa, will be “in the back of my mind as I think about COP,” he said.