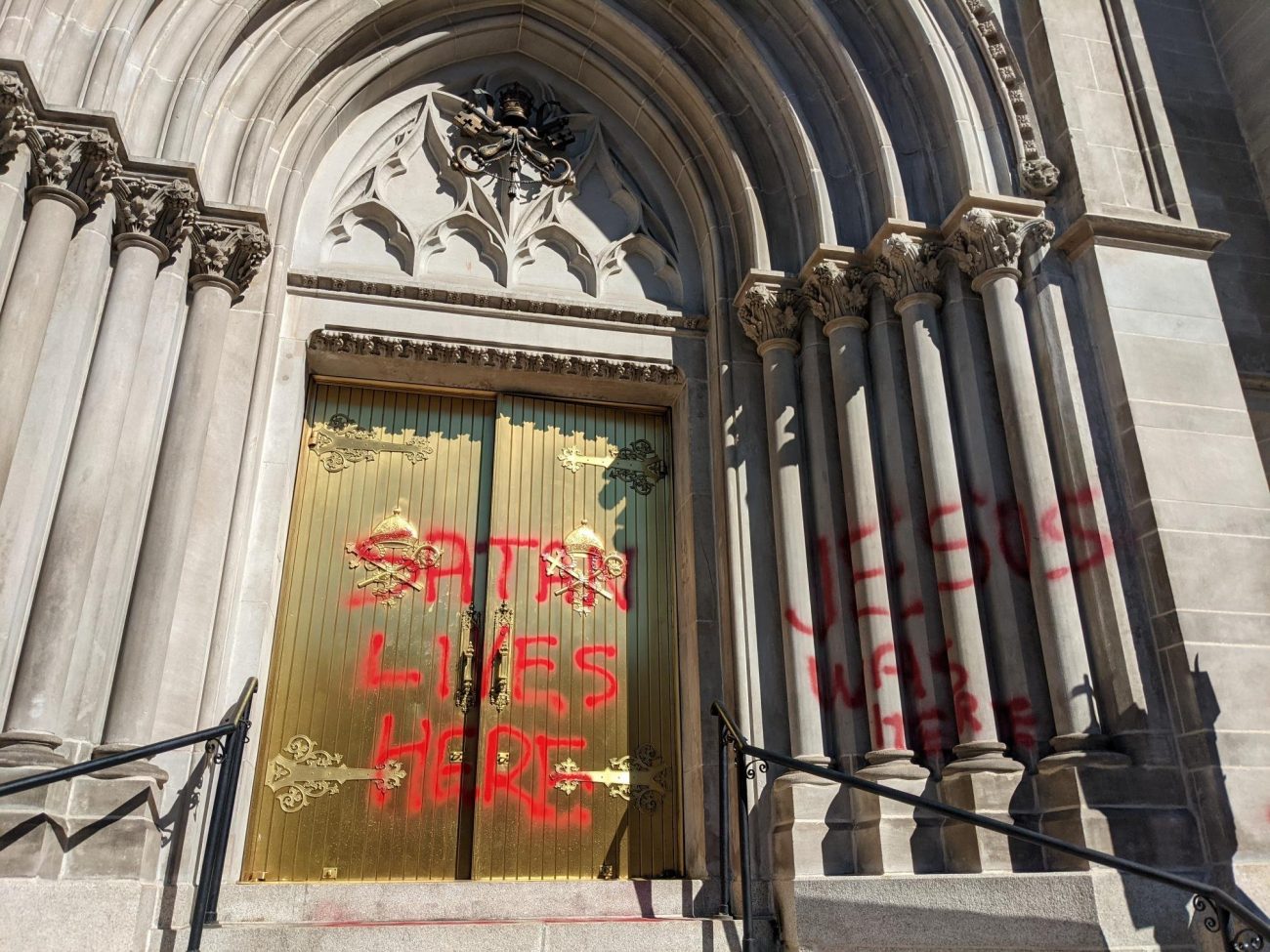 DENVER (CNS) — Denver Archbishop Samuel J. Aquila Oct. 20 condemned a rash of anti-religious vandalism of churches and other buildings in northern Colorado, and prayed “for an end to these attacks and that God’s love will be known by anyone who feels compelled to commit these acts.”

The most recent attacks were against George Washington High School in Denver, which was hit with anti-Semitic and “other hateful graffiti,” and the Denver Academy of the Torah, a Jewish K-12 day school, “suffered property destruction,” according to an archdiocesan news release.

Both of which are reportedly being investigated as bias-motivated crimes, it said.

“As brothers and sisters in faith, I acknowledge our common bonds and desire to be able to worship freely without fear of attack or intimidation in its many forms,” Archbishop Aquila said. “We live in a divided and pluralistic society, but acts of violence and hate are never the answer to our differences.”

“I would also call on our local elected officials to take these acts seriously, to speak out against them, and to encourage all citizens to engage with each other civilly,” he added.

“Finally, we are grateful to the police departments that have responded to these incidents, and to the numerous community members who, regardless of their beliefs, have reached out to our parishes and offered support and help in cleaning up after these attacks,” he said.

The Archdiocese of Denver said it is aware of at least 25 parishes or ministry locations that have been the target of vandalism, property destruction or theft since February 2020.

Among the most recent targets of attacks was the Cathedral Basilica of the Immaculate Conception in downtown Denver, which was vandalized with messages and symbols of hate written in red paint on the cathedral.

Parish officials estimated the vandalism took place between 7:30 a.m. and 8:30 a.m. Oct. 10. Graffitied messages such as “Satan Lives Here” and “Illuminati” and swastikas were splashed on doors, including the main entrance doors, and on at least one statue. There also were references to “child rapists.”

The building was cleaned with the help of volunteers.

In his Oct. 20 statement, Archbishop Aquila noted the U.S. Conference of Catholic Bishops issued a news release Oct. 14 reporting that there have been at least 100 incidents of arson, vandalism and other destruction at Catholic sites across the United States since May 2020.

That month, the USCCB’s Committee for Religious Liberty began tracking such incidents.

“These incidents of vandalism have ranged from the tragic to the obscene, from the transparent to the inexplicable,” the chairmen of the USCCB’s religious liberty and domestic policy committees said in a joint statement included in the release.

“There remains much we do not know about this phenomenon, but at a minimum, they underscore that our society is in sore need of God’s grace,” they said, calling on the nation’s elected officials “to step forward and condemn these attacks.”

“Where the motive was retribution for some past fault of ours, we must reconcile; where misunderstanding of our teachings has caused anger toward us, we must offer clarity; but this destruction must stop. This is not the way,” they said.

In response to such attacks, the Committee for Religious Liberty launched the “Beauty Heals” project featuring videos from various dioceses discussing the significance of sacred art.

At least 10 videos are available on YouTube; a link to the play list of all the videos can be found at https://bit.ly/3peNq3o.

On June 1 of this year, the USCCB’s Committee for Religious Liberty joined with several other faith groups calling for more funding for appropriations for the Federal Emergency Management Agency’s Nonprofit Security Grant Program in fiscal year 2022.

The program’s grants provide funds for target hardening and other physical security enhancements and activities for at-risk nonprofits from urban settings to suburban neighborhoods and rural communities, including houses of worship, religious schools, community centers and other charities.