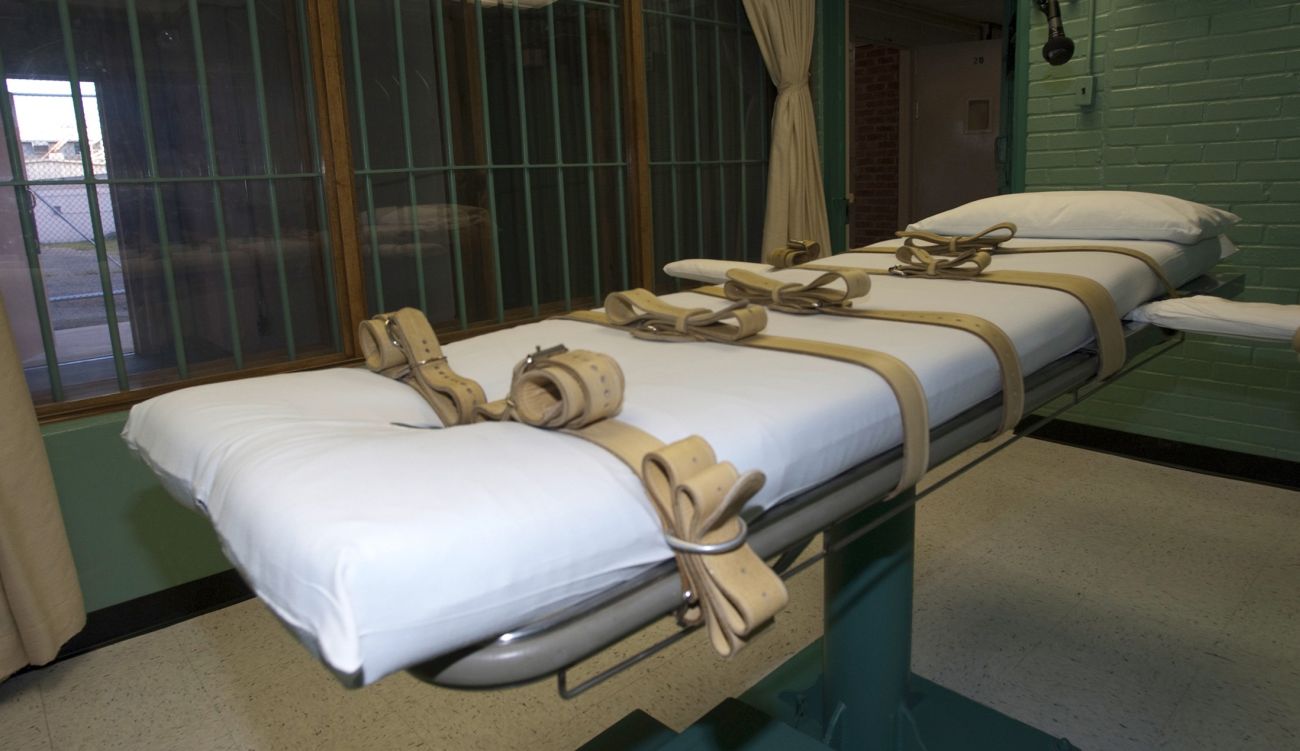 The death chamber table is seen in 2010 at the state penitentiary in Huntsville, Texas. During an Oct. 19 online forum, panelists such as Sister Helen Prejean, a longtime advocate against the death penalty, urged parish-level discussions on how capital punishment contradicts church teaching. (CNS photo/courtesy Jenevieve Robbins, Texas Department of Criminal Justice handout via Reuters)

WASHINGTON (CNS) — During an online panel about the death penalty Oct. 19, panelists stressed how capital punishment goes against church teaching, and they also urged the nearly 500 participants to promote this discussion at their own parishes by tapping into available resources.

“We’re here to help you; if you want to do more with your parish, reach out to us,” said Dominican Sister Terry Rickard, president and executive director of Renew International, a group that helps parishes strengthen parishioners’ leadership roles.

Renew International and the Archdiocese of Washington sponsored the panel, which featured Sister Helen Prejean, a Sister of St. Joseph of Medaille, and longtime advocate against the death penalty, and Jeannine Marino, secretary for pastoral ministry and social concerns for the Washington Archdiocese.

Marino was filling in for Washington Cardinal Wilton D. Gregory who could not attend at the last minute due to a dental emergency.

Marino noted that “our parishes are the heart of where we experience Catholic faith” and said that on the life issue of Catholic opposition to the death penalty parishes could tap into resources from Catholic Mobilizing Network which offers a Respect Life Month toolkit with anti-death penalty information, advocacy ideas and prayers.

Catholic Mobilizing Network, together with Renew International, also offers the publication “Dignity and the Death Penalty: Evolution of Catholic Teaching,” which is a small-group resource that can be divided up into material for small-group sessions.

“Whenever you gather with your parish, trust the spirit,” said Sister Prejean, who said that her own passion against the death penalty happened “because the Gospel woke me up.”

She said when she initially started writing to someone on death row, she thought it was something she could certainly take on “as an English major.” Two years later, she accompanied this inmate and prayed with him at his execution.

That experience changed her, she said, adding: “There has been a fire in me ever since.”

The Louisiana sister said she knows most Americans will never see the death penalty up close and she sees her role as someone who can share what she has seen and also emphasize the human dignity of the men and women on death row.

Marino said she was 21 and volunteering in prison ministry when she first heard Sister Prejean speak about the consistent life ethic.

And in her own work in the church, Marino has seen this firsthand, noting that the church has “always celebrated and upheld life and dignity of all persons.”

“We haven’t always given correct witness to this, but that is our teaching,” she said, noting that Catholics have spoken out against violence of abortion, domestic violence, gun violence and the death penalty.

Sister Prejean is very clear on this point, emphasizing in the panel discussion that “pro-life sounds like pro-innocent life” but it needs to encompass all life, even lives of those guilty of crimes.

She also noted the church has evolved in its teaching on this from “tolerating the death penalty to calling it inadmissible.”

“We’re a living church; we’re always changing on something,” she added.

She said St. John Paul II “set the volleyball over the net and Pope Francis knocked it over,” referring to the late pope’s message in St. Louis in 1999 where he called the death penalty “cruel and unusual” and to Pope Francis’ revision to the Catechism of the Catholic Church in 2018 to say that the death penalty was “inadmissible” because it was an affront to human dignity.

Promotional material about “Dignity and the Death Penalty” — which came out earlier this year and is available online — said the parish resource comes at a “pivotal moment in the death penalty abolition movement” with executions and death sentencing rates on the decline and public opposition to capital punishment at a record high.

It also said that Catholics involved in this issue around the country “could have a huge impact on the movement to end state-sponsored executions.”

NEXT: Kidnapping in Haiti prompts worries about other church workers’ safety