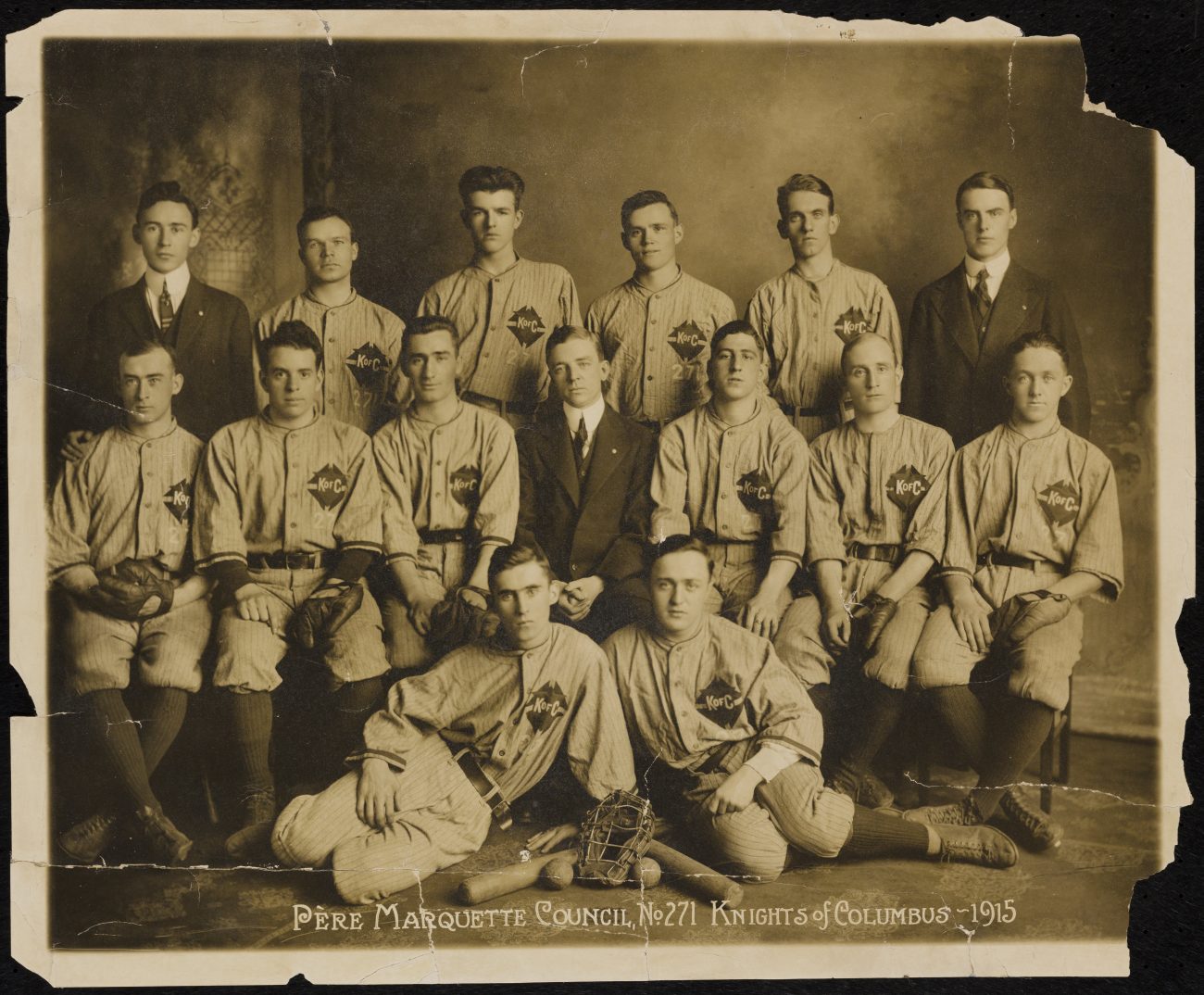 The 1915 baseball team of the Pere Marquette Knights of Columbus Council No. 271 in Boston is seen in this photo from a new online exhibit on baseball put together by the Knights' Blessed Michael McGivney Pilgrimage Center in New Haven, Conn. The team was considered the "fastest baseball team representing the Order in Greater Boston." This photograph is a gift of the family of Bernard J. McDonnell, member and manager of the 1915 team. (CNS photo/courtesy Knights of Columbus Multimedia Archives)

NEW HAVEN, Conn. (CNS) — The Blessed Michael McGivney Pilgrimage Center in New Haven has opened an online exhibition centering on the Knights of Columbus connection with baseball, which spans almost a century and a half.

The center, at the Knights’ headquarters, is named for the fraternal order’s founder, a candidate for sainthood.

“Baseball unites people. Whether at a professional ballpark, a community diamond or a church picnic, baseball brings people together in activity and in spirit,” said a news release announcing the exhibit. “Blessed Michael McGivney (1852-1890) realized this. He played the game as a seminarian and introduced it to others during his priesthood.”

Andrew Fowler, a content producer for the Knights of Columbus Communications Department, has researched Blessed McGivney’s attraction to baseball.

In a four-part series, “Knights of Columbus Baseball: An American Story,” Fowler recounts the Catholic-American story of how the Knights of Columbus as an organization and individual Knights — including some of baseball’s mightiest heroes — stepped up to the plate to produce memorable moments and shape the sport “for the better.”

The series, accompanied by numerous photographs and illustrations, is free and can be viewed online at michaelmcgivneycenter.org.

The first segment, which opened Oct. 1, details Blessed McGivney’s personal experiences with the game and the appeal it had among the members of his fledgling organization.

“Many who followed him shared his affection for the game. Some enjoyed it social and recreationally; others pursued it passionately, even to the Hall of Fame,” the release said. “For the Knights of Columbus, the game served as an early avenue of assimilation for Catholic immigrants and first-generation Americans.

“Today, baseball continues to serve as a path toward spiritual bonds and friendship for Knights and their families. These values stem from Father McGivney, who founded the fraternal organization on the principles of charity and unity.”

Subsequent segments in Fowler’s series, to be introduced at key points during the 2022 Major League Baseball season, will explore the growth of the game as a professional sport and chronicle developments during significant events in American and world history.