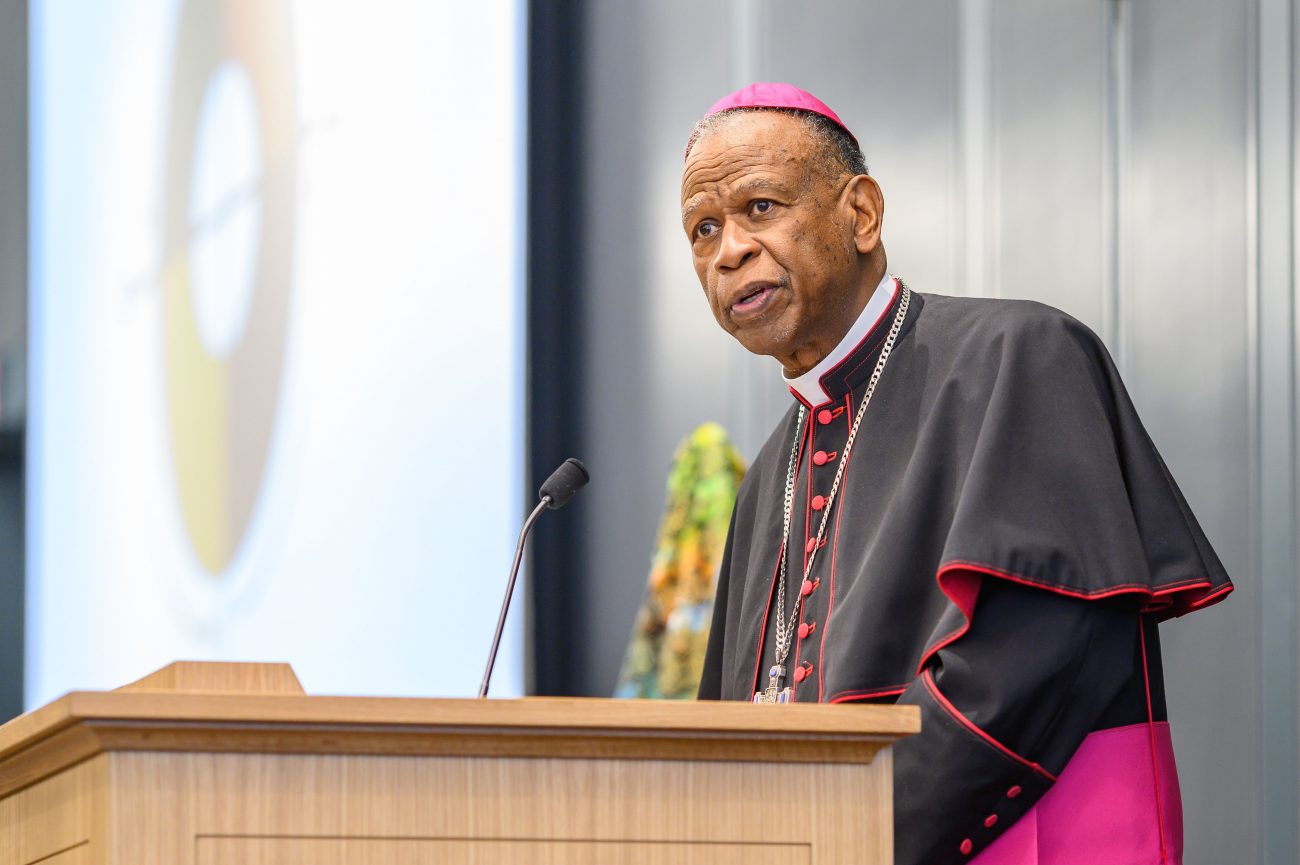 WASHINGTON (CNS) — The racial divide in American society and within the Catholic Church is one that needs to be bridged so that healing and progress can take place, said retired Bishop Edward K. Braxton of Belleville, Illinois.

“My hope is to move some people to make realistic efforts to bridge the racial divide. This can only come about by deep interior conversion of hearts and minds,” Bishop Braxton said Oct. 8.

He made the comments in an address, “The Catholic Church and the Racial Divide in the United States,” for Department of Africana Studies’ Colloquy on Black Church Studies at the University of Notre Dame in Indiana.

“This is a high and distant goal,” he added.

His address came during the 31st annual meeting of the Black Catholic Theological Symposium Oct. 7-9 at the university.

Bishop Braxton said he prefers to use the term “racial divide” as a broad description, from which he singled out racism as “the most damning and most egregious example.”

The racial divide, he said, began with slavery “to provide free laborers … by working as beasts of burden” on plantations. The divide, Bishop Braxton added, includes time in U.S. history spanned by the Civil War, “the Lost Cause era” and the Dred Scott decision.

“This Dred Scott opinion was written by Chief Justice Roger Taney, himself a Catholic who owned enslaved free human beings,” Bishop Braxton said. “Taney did not allow his faith in Jesus Christ to open his eyes.”

It has continued, he said, with “Jim Crow laws, the frequent lynching of African American men, women and children” as well as “the cruel murder of Emmett Till, the murder of Rev. Dr. Martin Luther King Jr., and now as we reflect upon the death of George Floyd and so many African American people since him in the name of law enforcement.”

Bishop Braxton said the Catholic Church and its institutions “have helped perpetuate this divide.”

He recalled one time when he, still a priest in Chicago, took a group of Black non-Catholic schoolchildren to a Catholic Church.

Typical of the questions posed to him that day, he said, were “Father, does the Catholic Church believe that only white people are in heaven?” “Why are they all pictured with blond hair, blue eyes and rosy cheeks?” and “Why are there no Black, Asian or Latino saints in the windows of this church?”

Doing something about “the invisibility of color” in religious art could be “one small step that could bridge the racial divide,” Bishop Braxton said. “Wouldn’t Catholics find that a welcome change, or would they object,” he said, and stop giving money to the church.

Acknowledging the church “was largely on the wrong side of history from the beginning of the racial divide,” Bishop Braxton said, “does not lead to the conclusion that all Catholics are intrinsically racist.”

It takes reflection and conversation to begin the process of conversion, he noted — something forgotten by one speaker on the topic he remembers hearing years ago.

“The first words that came out of his mouth were, ‘Whether you know it or not, all of you are white racists.’ The possibility of dialogue ended right there,” Bishop Braxton said.

Nor are Americans in general able to dive deeper into the racial divide and its effects, using the subject of reparations as an example.

Bishop Braxton cited a House bill to create a commission to explore the possibility of reparations. “What would be appropriate remedies for slavery? Money? To whom, from whom? Poor Americans? How poor? Whose money?” he asked aloud. “Most Americans do not support the idea of reparations, period.”

He said in one poll, 59% of Black Americans favored cash payments as reparations, but just 6% of whites did; 63% of Blacks favored education and job training as a form of reparations, as opposed to 19% of whites who supported this.

“Reparations mean repair — healing what has been broken,” Bishop Braxton said. “A structure has been broken at the foundation and it cannot stand unless it is repaired.”

While some have offered a price tag of $500 billion for reparations, he contrasted that to the $6 trillion spent “for wars since 2001 alone.”

Reparation, he added, “requires us to acknowledge the racial divide among us.”

Bishop Braxton noted during his address that the U.S. bishops have never made a statement on reparations, and said in response to a question posed after his remarks that they did not mention it in their 2018 anti-racism pastoral letter, “Open Wide Our Hearts: The Enduring Call to Love.”

“A bishops’ public statement can only be published with the consensus of nearly 300 bishops,” he said. “An individual bishop may” address an issue — “and I wouldn’t be surprised if he writes about this topic,” he continued, “but from the point of view of a large ecclesiastical community like the Catholic Church the topic is not mature for the bishops to make a helpful comment on it.”

“Someone could be prophetic,” he added.

In the U.S. Catholic Church, the Sisters of the Sacred Heart in Louisiana have begun efforts to make amends for their role in slavery. To be “once owned by Catholic religious sisters — wrap your hands around that,” Bishop Braxton said.

Descendants of enslaved people who had been owned by the Jesuits and Georgetown University in Washington have been in talks with the university about how it can provide redress.

“Some of the descendants have asked for a $1 billion fund to meet the education, housing and health needs,” the bishop said, although the university has not given an answer to that request.

“It has the potential of being addressed to some degree,” he said. “When and to what degree, who knows.”

NEXT: Military members deploying conscience in fight against vaccine mandate