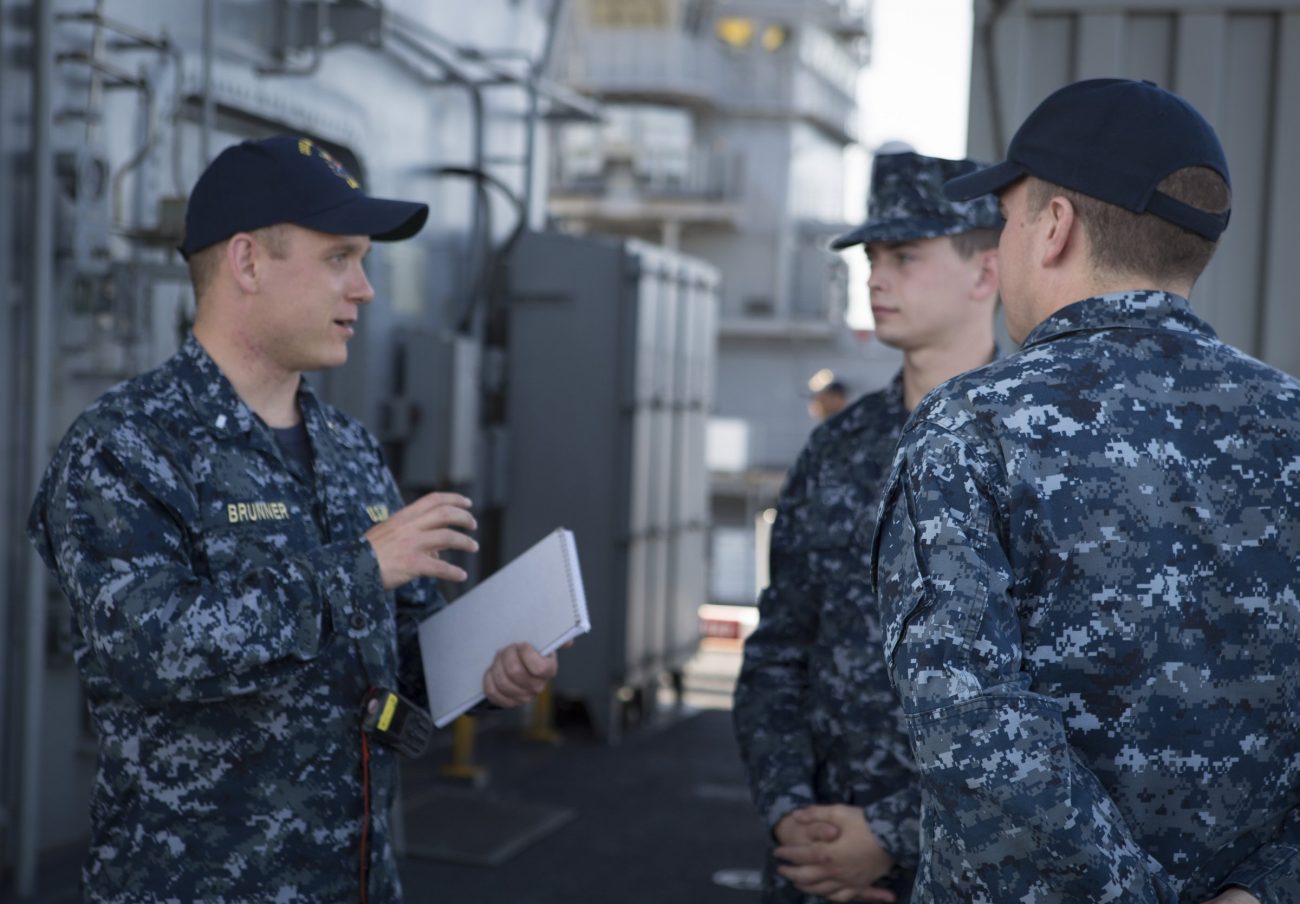 In this 2016 file photo, Father William J. Brunner, a Navy chaplain and a priest of the Diocese of Green Bay, Wis., interacts with two sailors while he makes his routine maintenance checks aboard the Navy warship USS America docked in San Diego. (CNS photo/Chaz Muth)

WASHINGTON (CNS) — Archbishop Timothy P. Broglio of the U.S. Archdiocese for the Military Services said Oct. 12 that “no one should be forced to receive a COVID-19 vaccine if it would violate the sanctity of his or her conscience.”

Some members of the U.S. armed forces are seeking a religious exemption to the vaccine mandate for the military because of the connection the three vaccines available in the U.S. have — in varying degrees — to an abortion-derived cell line.

“The denial of religious accommodations, or punitive or adverse personnel actions taken against those who raise earnest, conscience-based objections, would be contrary to federal law and morally reprehensible,” Archbishop Broglio said.

Those who refuse to get the vaccine for religious reasons “must continue to act in charity for their neighbors and for the common good,” he said.

They must take all necessary precautions to prevent the spread of COVID-19, he said, such as wearing face coverings, continuing to social distance, and undergoing COVID-19 testing and quarantining when necessary.

They also must be open to receiving a COVID-19 vaccine with no connection to an abortion-derived cell line when one is developed, the archbishop added.

The three vaccines currently being administered in the U.S. are the Pfizer and Moderna two-shot vaccines and the one-shot Johnson & Johnson vaccine.

Pfizer and Moderna used abortion-derived cell lines only in lab testing, not in developing or producing their vaccines; Johnson & Johnson used the cell lines in all three phases.

The type of link Pfizer and Moderna has to these cell lines “has been for centuries considered remote material cooperation with evil and is never sinful,” Archbishop Broglio said.

The Johnson & Johnson vaccine ” is more problematic,” he said. “If it were the only vaccine available, it would be morally permissible, but the faithful Catholic is to make known his or her preference for a more morally acceptable treatment.”

Archbishop Broglio referred to a statement he had issued issued earlier this year in which he said that the military archdiocese “clearly encourages the faithful entrusted to her care to follow the guidance of the Holy See and the U.S. Conference of Catholic Bishops with regard to COVID-19 vaccines.”

The Vatican Congregation for the Doctrine of the Faith, “which is the church’s highest doctrinal authority,” he said, “has made clear its position on the vaccines available to mitigate the coronavirus pandemic.”

“The USCCB Committees on Doctrine and on Pro-Life Activities have stated that it is morally permissible to receive the COVID-19 vaccinations currently available in the United States,” Archbishop Broglio said.

In December, the Vatican Congregation for the Doctrine of the Faith, citing church teaching, said that when alternative vaccines are not available, it is morally acceptable to receive vaccines developed or tested using cell lines originating from aborted fetuses, in this case, including these COVID-19 vaccines.

The congregation also said: “Those who, however, for reasons of conscience, refuse vaccines produced with cell lines from aborted fetuses, must do their utmost to avoid, by other prophylactic means and appropriate behavior, becoming vehicles for the transmission of the infectious agent.”

In a March 2 joint statement, Bishop Kevin C. Rhoades of Fort Wayne-South Bend, Indiana, chairman of the U.S. bishops’ Committee on Doctrine, and Archbishop Joseph F. Naumann of Kansas City, Kansas, chairman of the bishops’ Committee on Pro-Life Activities, said that “given the worldwide suffering that this pandemic is causing, we affirm again that being vaccinated can be an act of charity that serves the common good.”

If a choice of vaccines is available, the USCCB committee chairmen recommended “you pick one with the least connection to abortion-derived cell lines,” which in this case are the Pfizer and Moderna vaccines.

Since U.S. Secretary of Defense Lloyd Austin’s Aug. 24 memorandum directing “the mandatory vaccination of all services members against COVID-19,” some service members have refused to take the vaccine and have requested a religious accommodation through the Religious Freedom Restoration Act,” the archbishop said.

“This circumstance raises the question of whether the vaccine’s moral permissibility precludes an individual from forming a sincerely held religious belief that receiving the vaccine would violate his conscience. It does not,” he said.

“Notwithstanding the moral permissibility of these vaccines,” he said, “the church treasures her teaching on the sanctity of conscience.”

“Conscience is the most secret core and sanctuary of a man. There he is alone with God, whose voice echoes in his depths,” he said, quoting St. Paul VI in the 1965 Second Vatican Council document “Dignitatis Humanae” (“The Dignity of the Human Person”).

Quoting St. Paul VI from the Second Vatican Council document “Gaudium et Spes,” he added: “In all his activity, a man is bound to follow his conscience in order that he may come to God, the end and purpose of life.

“It follows that he is not to be forced to act in a manner contrary to his conscience. Nor, on the other hand, is he to be restrained from acting in accordance with his conscience, especially in matters religious.'”

In April, the USCCB’s Secretariat of Pro-Life Activities launched a campaign urging Catholics to write letters to pharmaceutical companies urging them to stop the use of abortion-derived cell lines in developing, testing and producing vaccines.

NEXT: Vandalism at Denver’s cathedral is latest incident against local churches