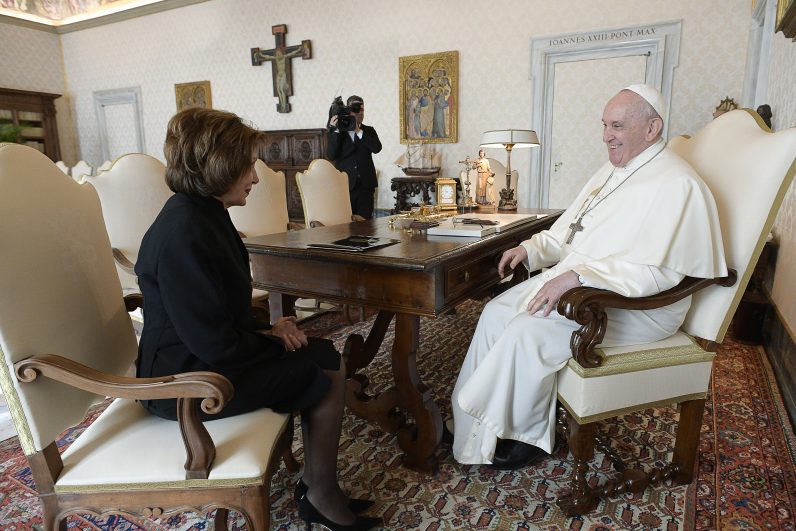 VATICAN CITY (CNS) — Pope Francis met privately at the Vatican Oct. 9 with U.S. House Speaker Nancy Pelosi, who was in Rome to speak at a meeting of legislators from around the world in preparation for the U.N. climate summit.

The Vatican released photos of Pelosi’s meeting with the pope, but provided no details of the encounter, which took place before Pope Francis addressed the Pre-COP26 Parliamentary Meeting.

Pelosi, a Catholic, said in a statement that it was “a spiritual, personal and official honor” to have an audience with the pope.

“His Holiness’ leadership is a source of joy and hope for Catholics and for all people, challenging each of us to be good stewards of God’s creation, to act on climate, to embrace the refugee, the immigrant and the poor and to recognize the dignity and divinity in everyone,” her statement said.

Because Pelosi supports legalized abortion, her archbishop, Archbishop Salvatore J. Cordileone of San Francisco, asked “all Catholics and others of goodwill” to join a prayer and fasting campaign for Pelosi’s “conversion.”

“A conversion of heart of the majority of our congressional representatives is needed on this issue, beginning with the leader of the House, Speaker Nancy Pelosi,” Archbishop Cordileone said in a statement Sept. 29.

In her keynote address to fellow legislators from around the world meeting in Rome Oct. 8, Pelosi said world governments must take bold action in their own countries and when they meet for COP26 in Glasgow, Scotland, in November. 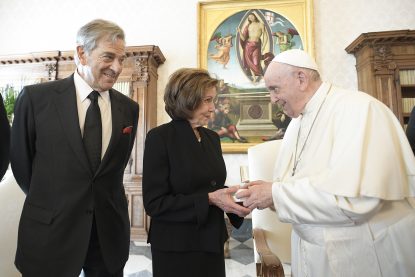 “It would be a dereliction of duty for us not to go into the future in a green way and (one) that responds to the urgency of the climate crisis. It’s all about the children,” she said. “We will leave them a world where they can be healthy, where they can thrive and reach their fulfillment.”

In his speech to the parliamentarians Oct. 9, Pope Francis spoke of the “important, and indeed, crucial” role of governments in slowing climate change and restoring a healthy environment.

“This demanding change of direction will require great wisdom, foresight and concern for the common good: in a word, the fundamental virtues of good politics,” he said. “As political leaders and legislators, you are responsible for influencing people’s actions by those means provided by the law, which lays down rules for admissible conduct in the light of the common good, and with respect for such other fundamental principles as the dignity of the human person, solidarity and subsidiarity.”

“Care for our common home naturally falls within the scope of these principles,” the pope said. “To be sure, it is not just a matter of discouraging and penalizing improper practices, but also, and above all, of concretely encouraging new paths to pursue, paths better suited to the objectives we seek to achieve. These are essential elements to be considered as we strive to meet the goals set out in the Paris Agreement and to contribute to the positive outcome of COP26.”

Pope Francis also gave the parliamentarians copies of the appeal he and other religious leaders signed at the Vatican Oct. 4 calling on world leaders and all people of good will to make a more serious commitment to protecting creation.

The challenge, he said, “is complex and demanding, but humanity has the means to effect this change, which calls for genuine conversion and a steadfast determination to meet it. This is especially incumbent upon those called to positions of great responsibility in the various sectors of society.”

PREVIOUS: By listening to Holy Spirit, synod can be process of healing, pope says

NEXT: Pilgrims flock to beatified teen’s tomb in Assisi ahead of feast day