By listening to Holy Spirit, synod can be process of healing, pope says 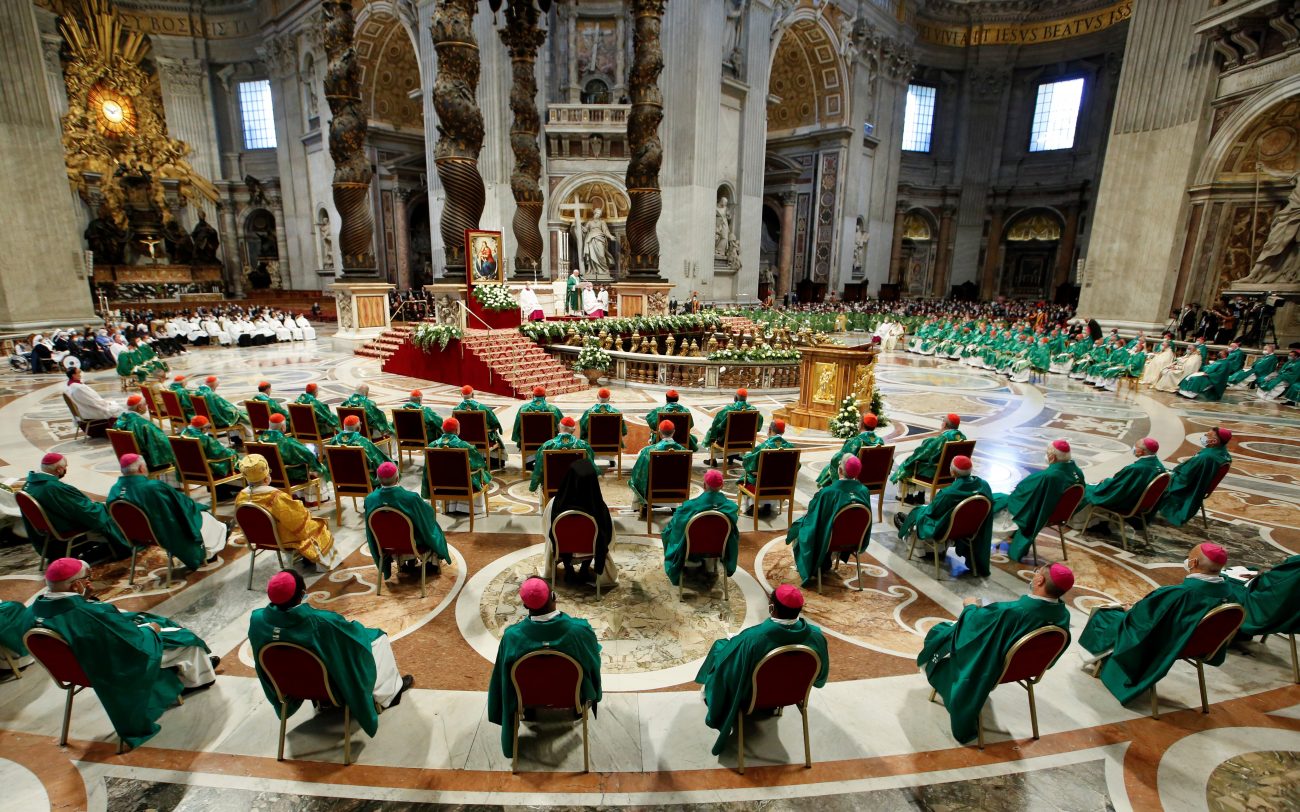 Pope Francis gives the homily as he celebrates a Mass to open the process that will lead up to the assembly of the world Synod of Bishops in 2023, in St. Peter's Basilica at the Vatican Oct. 10, 2021. (CNS photo/Remo Casilli, Reuters)

VATICAN CITY (CNS) — A synod calls on everyone to become experts in “the art of encounter” in a way that is uplifting and transformative, Pope Francis said, formally opening the process leading up to the assembly of the Synod of Bishops in 2023.

“Celebrating a synod means walking on the same road, together” just like Jesus did — encountering, listening and discerning with all who one meets, the pope said in his homily at the Mass in St. Peter’s Basilica Oct. 10.

“Are we prepared for the adventure of this journey? Or are we fearful of the unknown, preferring to take refuge in the usual excuses: ‘It’s useless’ or ‘We’ve always done it this way?'” he asked.

Some 3,000 people attended the Mass, including the 270 people — cardinals, bishops, priests, religious and laypeople — invited to the day of reflection in the Vatican Synod Hall Oct. 9.

The weekend of events began the “synodal journey,” which will explore the theme, “For a synodal church: communion, participation and mission.” Bishops around the world were to open the process in their dioceses Oct. 17. The diocesan phase, which runs until April, will focus on listening to and consulting the people of God.

In his homily, the pope said they should begin the synodal process “by asking ourselves — all of us, pope, bishops, priests, religious and laity — whether we, the Christian community, embody this ‘style’ of God, who travels the paths of history and shares in the life of humanity.”

The day’s Gospel reading (Mk 10:17-30) of Jesus setting out on a journey and encountering a rich man offers just one example of how Jesus “walks alongside people and listens to the questions and concerns lurking in their hearts,” he said. “He shows us that God is not found in neat and orderly places, distant from reality, but walks ever at our side.”

Celebrating a synod, he said, means walking on the same road as others and living out the “three verbs” that characterize a synod: to encounter, listen and discern. 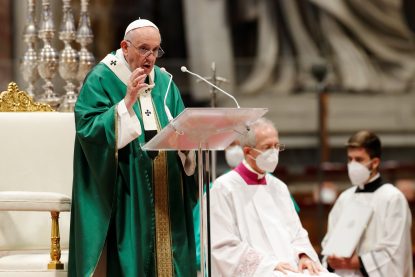 Pope Francis gives the homily as he celebrates a Mass to open the process that will lead up to the assembly of the world Synod of Bishops in 2023, in St. Peter’s Basilica at the Vatican Oct. 10, 2021. (CNS photo/Remo Casilli, Reuters)

“We too are called to become experts in the art of encounter. Not so much by organizing events or theorizing about problems as in taking time to encounter the Lord and one another,” to devote time to prayer and adoration, and to listen to what the Holy Spirit wants to say to the church, the pope said.

Jesus shows that an encounter has the power to change someone’s life — “the Gospel is full of such encounters with Christ, encounters that uplift and bring healing,” the pope said. In fact, Jesus was never in a hurry, and he would never have looked at a watch to signal it was time to wrap things up. “He was always at the service of people he met in order to listen to them.”

Each encounter requires “openness, courage and a willingness to let ourselves be challenged by the presence and the stories of others,” the pope said. It means not hiding behind a facade or stiff formalities indicative of a spirit of clericalism or of courtiers, but it means being a father.

To that end, the pope said he would be meeting a group of people who live on the streets later that day. He said they had already started meeting because another group of people had gone to listen to them and from there, “they have been able to begin the journey.”

Sincere listening involves the heart, not just the ears, Pope Francis said. The aim is not to be able to answer people’s questions, especially with pre-packaged or “artificial and shallow responses,” but to provide an opportunity to tell one’s story and speak freely.

“Whenever we listen with the heart, people feel that they are being heard, not judged; they feel free to recount their own experiences and their spiritual journey,” he said.

Listening to one another “is a slow and perhaps tiring exercise” but it must be done, including listening to “the questions, concerns and hopes of every church, people and nation,” and to the “challenges and changes” that world presents, he added.

Encountering and listening “are not ends in themselves” where everything stays the same, but must lead to discernment, he said.

“Whenever we enter into dialogue, we allow ourselves to be challenged, to advance on a journey. And in the end, we are no longer the same; we are changed,” he said.

The synod is “a journey of spiritual discernment that takes place in adoration, in prayer and in dialogue with the word of God,” the pope said.

Discernment is what lights the way and guides the synod, “preventing it from becoming a church convention, a study group or a political congress, but rather a grace-filled event, a process of healing guided by the Holy Spirit,” Pope Francis said.

Like he asked the rich man in the Gospel reading, Jesus is asking everyone “to empty ourselves, to free ourselves from all that is worldly, including our inward-looking and outworn pastoral models, and to ask ourselves what it is that God wants to say to us in this time and the direction in which he wants to lead us,” he said.

Pope Francis wished everyone “a good journey together! May we be pilgrims in love with the Gospel and open to the surprises of the Spirit.”

NEXT: Pope meets Pelosi; both speak at climate change meeting