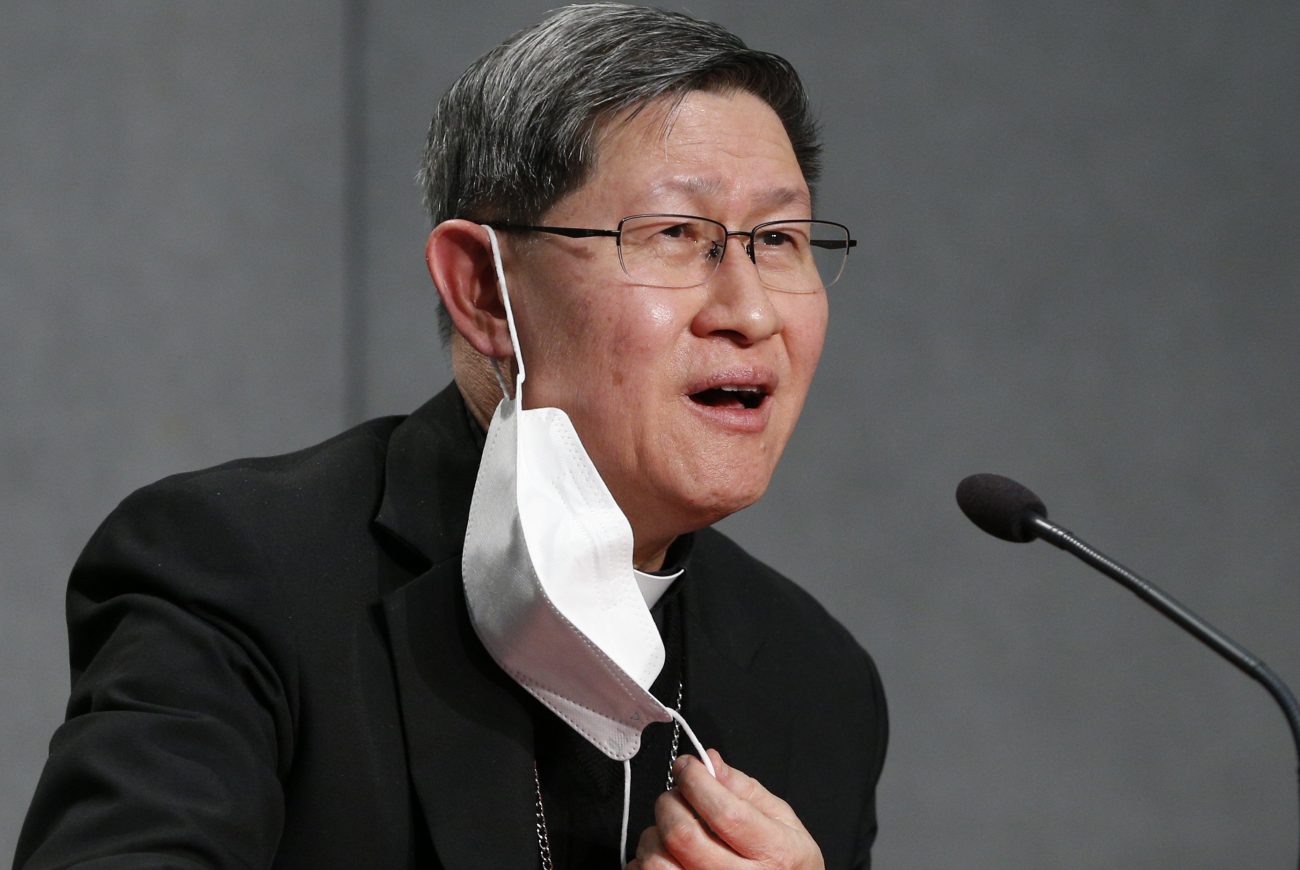 Cardinal Luis Antonio Tagle, prefect of the Congregation for the Evangelization of Peoples, responds to a question during a news conference at the Vatican Oct. 21, 2021. The topic was World Mission Sunday, to be celebrated Oct. 24. (CNS photo/Paul Haring)

VATICAN CITY (CNS) — At the heart of the celebration of World Mission Sunday are the experiences of countless missionaries who share with others their own personal love story with Jesus, said Filipino Cardinal Luis Antonio Tagle.

Promoting the celebration of World Mission Sunday Oct. 24, Cardinal Tagle, prefect of the Congregation for the Evangelization of Peoples, told journalists that the church’s mission to evangelize does not belong to just a select few, but is a “call for all the baptized.”

“Spirituality and an encounter with the Lord is always missionary,” he said. A relationship with Jesus is “an experience that moves us out of ourselves to share Jesus with all nations.”

A missionary, he said, is anyone who “tells ‘a story of love’ lived with Jesus and brings compassion from Christ to the world.”

“We cannot keep to ourselves the encounter with God who has touched our hearts and who has done marvelous works,” he said.

The theme chosen for the 2021 celebration is taken from the Acts of the Apostles: “We cannot but speak about what we have seen and heard.” The Vatican released Pope Francis’ message for World Mission Sunday Jan. 29.

In his message, the pope said one’s life of faith “grows weak, loses its prophetic power and its ability to awaken amazement and gratitude when we become isolated and withdraw into little groups.”

“By its very nature, the life of faith calls for a growing openness to embracing everyone, everywhere,” he said.

Cardinal Tagle reiterated the pope’s words and said that the “encounter with Christ and his Gospel generates openness and communion toward one’s neighbor.”

“The experience of Christ does not build walls, separating us from others, but pushes us toward others with joy, not as conquerors in a triumphalist sense, but in the sense of sharing the goodness of what we have seen, heard and experienced,” Cardinal Tagle said.

“We must recover this aspect,” he added. “The mission is in the heart of each one of us, each baptized person is a missionary of the kingdom of God.”

When asked about the challenges facing missionaries during the pandemic, including the use of technology in the church’s evangelization efforts, Cardinal Tagle said he was “grateful for the advances in technology” that allowed people to attend liturgies online and join Bible study programs.

“When people discovered the possibility of using the internet, the requests for Bible formation increased more than what we had originally planned. So, there is a blessing in that area,” said the cardinal, who also serves as president of the Catholic Biblical Federation.

However, the cardinal told journalists the church and its missionaries cannot forget reliance on technology has its downsides as well.

“We are corporeal beings, we need contact,” he said. “As our young people are growing in what they call artificial intelligence, virtual intelligence, there is a call for us in the church to develop other types of intelligences.”

Cardinal Tagle said in addition to the need to recognize the importance of relational, emotional and affective intelligence, which the digital world can only simulate, “contextual intelligence” is almost completely lacking, “because there is a tendency, like with a tweet, to be very, very short and you don’t have an appreciation of the complexity of context.”

“We need that type of intelligence,” he added.

NEXT: Cameroon bishops warn of increasing violence in separatist campaign