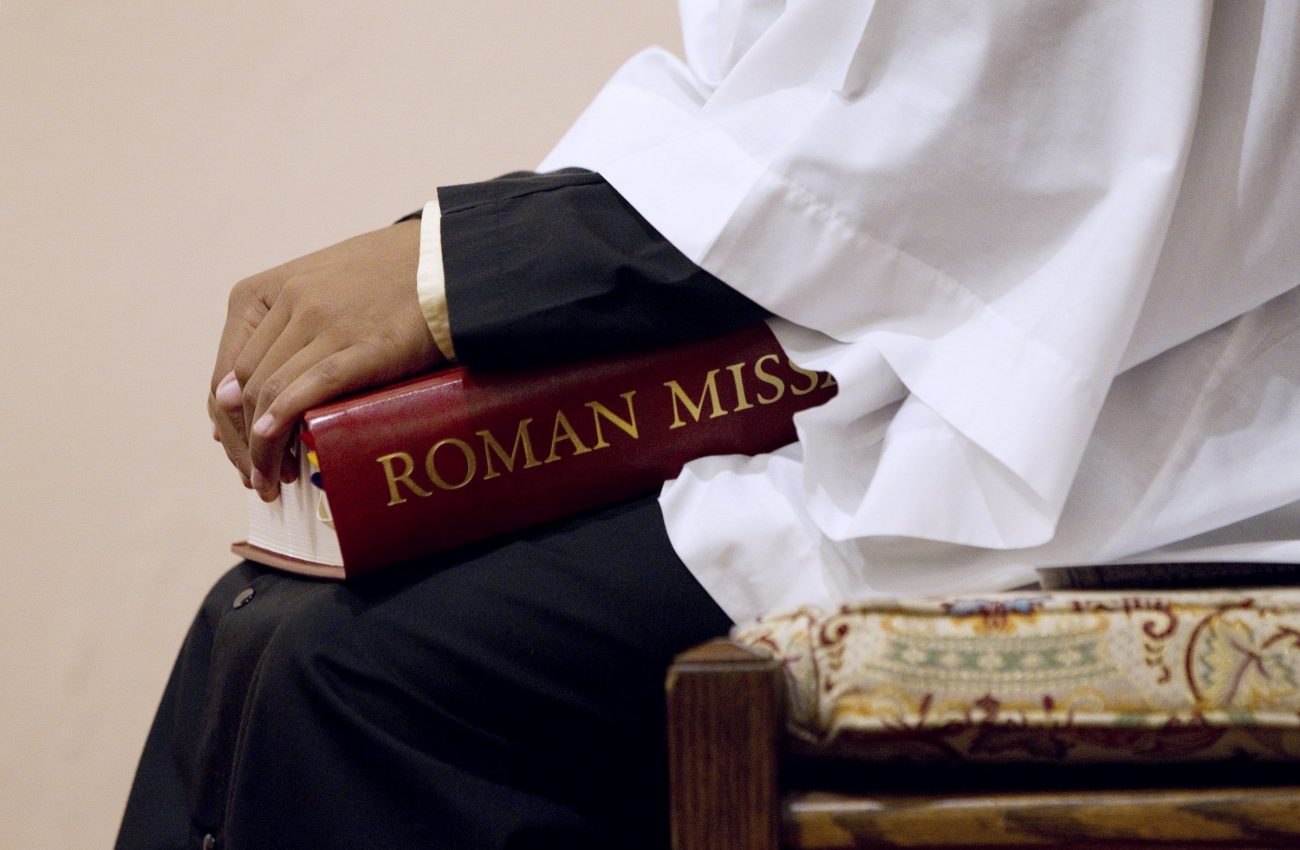 An altar server holds a copy of the Roman Missal during Mass at St. Joseph Catholic Church in Alexandria, Va., in this 2011 file photo. The Congregation for Divine Worship and the Sacraments has issued a decree formalizing changes Pope Francis made in canon law to recognize the primary responsibility of bishops, and not the congregation, for liturgical translations and cultural adaptations in the liturgy. (CNS photo/Nancy Phelan Wiechec)

VATICAN CITY (CNS) — Four years after Pope Francis modified canon law to emphasize the responsibility of bishops’ conferences for judging the accuracy and suitability of liturgical translations and adaptations, the Congregation for Divine Worship and the Sacraments published an executive decree formalizing the new process.

The goal, he said, is to promote the liturgical life of the Latin-rite church “in a climate of collaboration and dialogue,” placing the congregation at the service of the bishops in fulfilling their responsibilities.

Archbishop Roche was appointed prefect of the congregation in May, succeeding Cardinal Robert Sarah, who was head of the office in 2017 when Pope Francis promulgated “Magnum Principium” (“The Great Principle”), changing in canon law the process for approving liturgical texts. In general, translations adopted by a bishops’ conference now require “confirmation” by the congregation rather than the more rigorously studied “recognition.”

In a letter the pope sent to Cardinal Sarah two months after ordering the change, he said the Vatican is not to “impose” a specific liturgical translation on bishops’ conferences, but rather is called to recognize the bishops’ authority and expertise in determining the best way to faithfully translate Latin texts into their local languages.

The decree issued by the congregation Oct. 22 said, “The adverb ‘faithfully’ implies a threefold fidelity: firstly, to the original text, secondly to the particular language into which it is translated and finally to the comprehension of the text by the addressees who are introduced to the vocabulary of biblical revelation and liturgical tradition.”

It also quoted Pope Francis’ 2017 instruction: “While fidelity cannot always be judged by individual words but must be sought in the context of the whole communicative act and according to its literary genre, nevertheless some particular terms must also be considered in the context of the entire Catholic faith because each translation of texts must be congruent with sound doctrine.”

The new document, urging attention to the way local languages are actually spoken and are evolving, seemed to open the way to wider use in English translations of inclusive language, such as “people” or “men and women” instead of “men,” and to translations which may not be word-for-word, but still convey the teaching of the church.

However, it said, “The adoption of vernacular languages in the liturgy must, among other things, take into account that the fundamental criterion is the participation of the people in the liturgical celebrations and not other types of considerations, such as social issues or issues related to identity.”