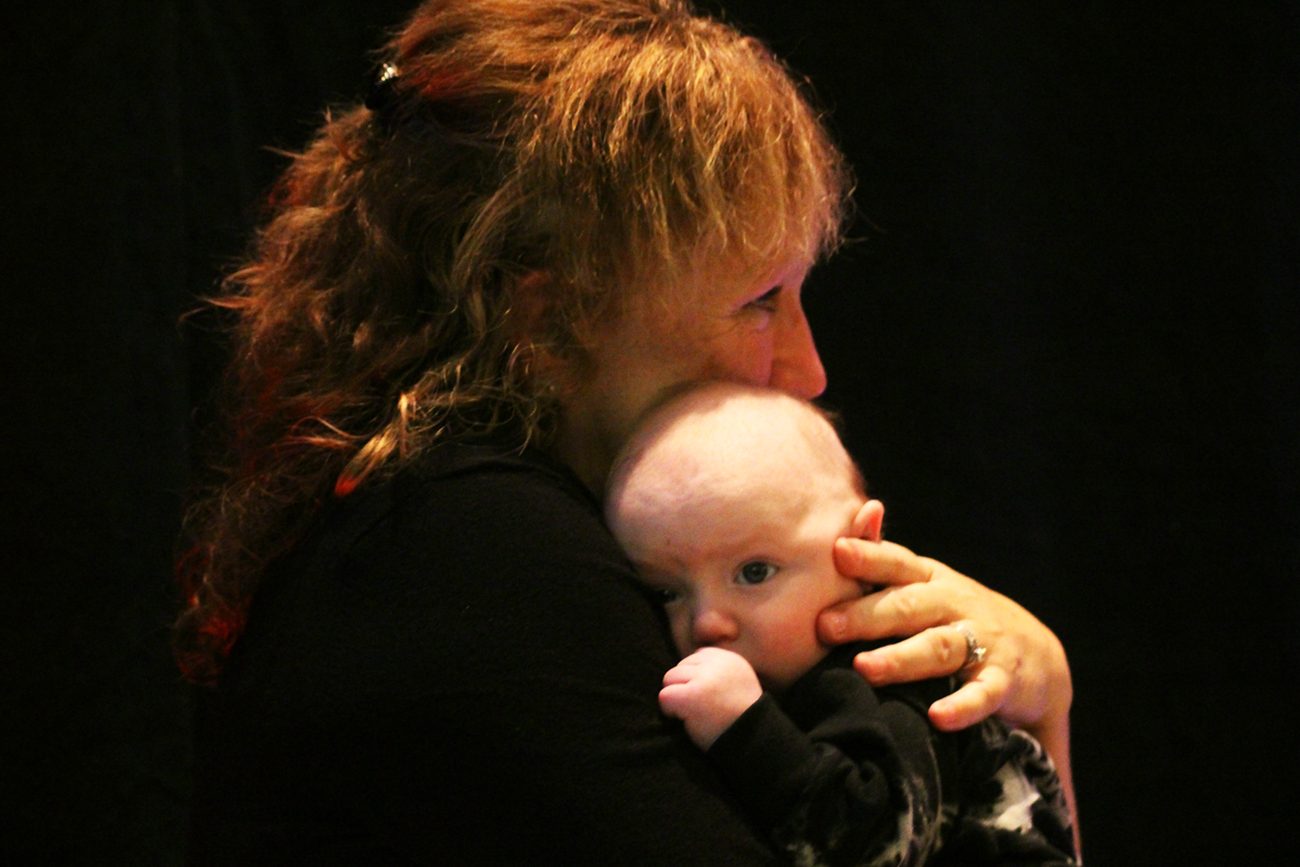 A woman holds an infant during the 39th annual Stand Up For Life dinner at the Sheraton Downtown Philadelphia, Nov. 21. (Gina Christian)

Hundreds of pro-life advocates gathered this past weekend to celebrate decades of outreach – and to draw fresh inspiration for efforts to end abortion.

Some 1160 were on hand for the Pro-Life Union (PLU) of Greater Philadelphia’s 39th annual Stand Up for Life Dinner at the Sheraton Downtown Philadelphia. The Nov. 21 event featured attendees from an array of ministries and organizations, including the archdiocesan Office for Life and Family, Catholic Social Services (CSS), Culture Project International, 40 Days for Life, Rachel’s Vineyard, Project Rachel, Life Runners, the St. Raymond Nonnatus Foundation, Hope Pregnancy Center and Students for Life.

Rounding out the numerous groups were members from “so many different councils” of the Knights of Columbus, said master of ceremonies Father Christopher Walsh, pastor of St. Raymond of Penafort Parish in Philadelphia and PLU board chairman.

At the dinner, the PLU honored three area individuals for their exceptional commitment to the pro-life movement in the Philadelphia area: Deborah Molina, recipient of the group’s St. John Paul II “Be Not Afraid” Award; Regina O’Reilly, named a James D. Kelly Pro-Life Pioneer; and Dominic Sceski of Generation Life, recognized with the John and Harriet Stanton Young Leader Award.

Dozens of students from some 33 area Catholic schools also filled the tables, joined by Auxiliary Bishop Joseph Coffey of the Archdiocese for the Military Services in the USA, State Rep. Tracy Pennycuick, Pennsylvania gubernatorial candidate Guy Ciarrocchi and U.S. Senate candidate Kathy Barnette, who said there can be “no exceptions to the rule” when it comes to ending abortion. 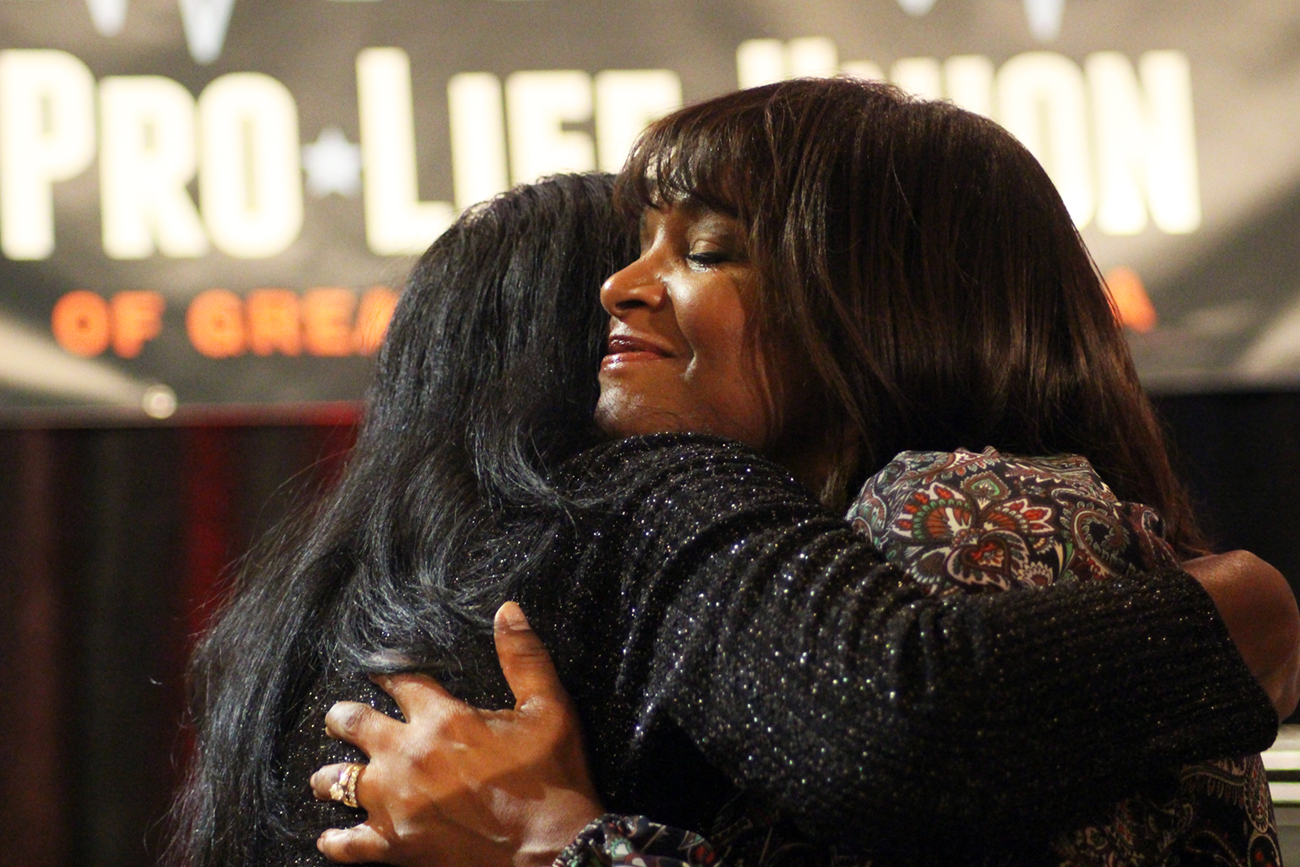 U.S. Senate candidate Kathy Barnette embraces Dr. Monique Ruberu during the 39th annual Stand Up For Life Dinner in Philadelphia, Nov. 21. Conceived during a rape, Barnette told attendees “abortion would not have corrected the wrong” inflicted on her mother. (Gina Christian)

Barnette told attendees she herself was “the byproduct of a rape,” and credited her grandparents for being “a net” of safety and support when her mother was sexually assaulted at age 11.

Abortion “would not have corrected the wrong that had been inflicted upon my mom,” said Barnette, whose resume titles include author, media commentator, corporate executive, adjunct professor and former Army reservist.

“I am here to tell you that my life has value,” she said.

‘All the lies of the abortion industry’

That’s a message obscured by “all the lies” of “the abortion industry,” said the evening’s keynote speaker, Patricia Sandoval.

Host of EWTN’s weekly “Pro-Life Report” and author of “Transfigured,” Sandoval herself had three abortions and formerly worked for Planned Parenthood – experiences she traces in part to a “false education called safe sex” promoted to children in schools and unchallenged by parents.

“The abortion industry knows … these children are not receiving the truth at home,” Sandoval said, adding that “safe sex” ultimately results in “future abortion patients” – many of them the “13, 14, 15-year old girls” she regularly encountered both as an abortion client and counselor.

According to the Centers for Disease Control, birth control pills and condoms – the two most popular methods of artificial contraception – fail to prevent pregnancy 7% and 13% of the time, respectively.

Multiple abortions are “very, very common,” said Sandoval, noting she had met women who had procured “six, eight, 16” and in one instance “23 abortions.”

Proponents of contraception and abortion overlook the long-term psychological and emotional impact of sexual relations outside of marriage, she said. 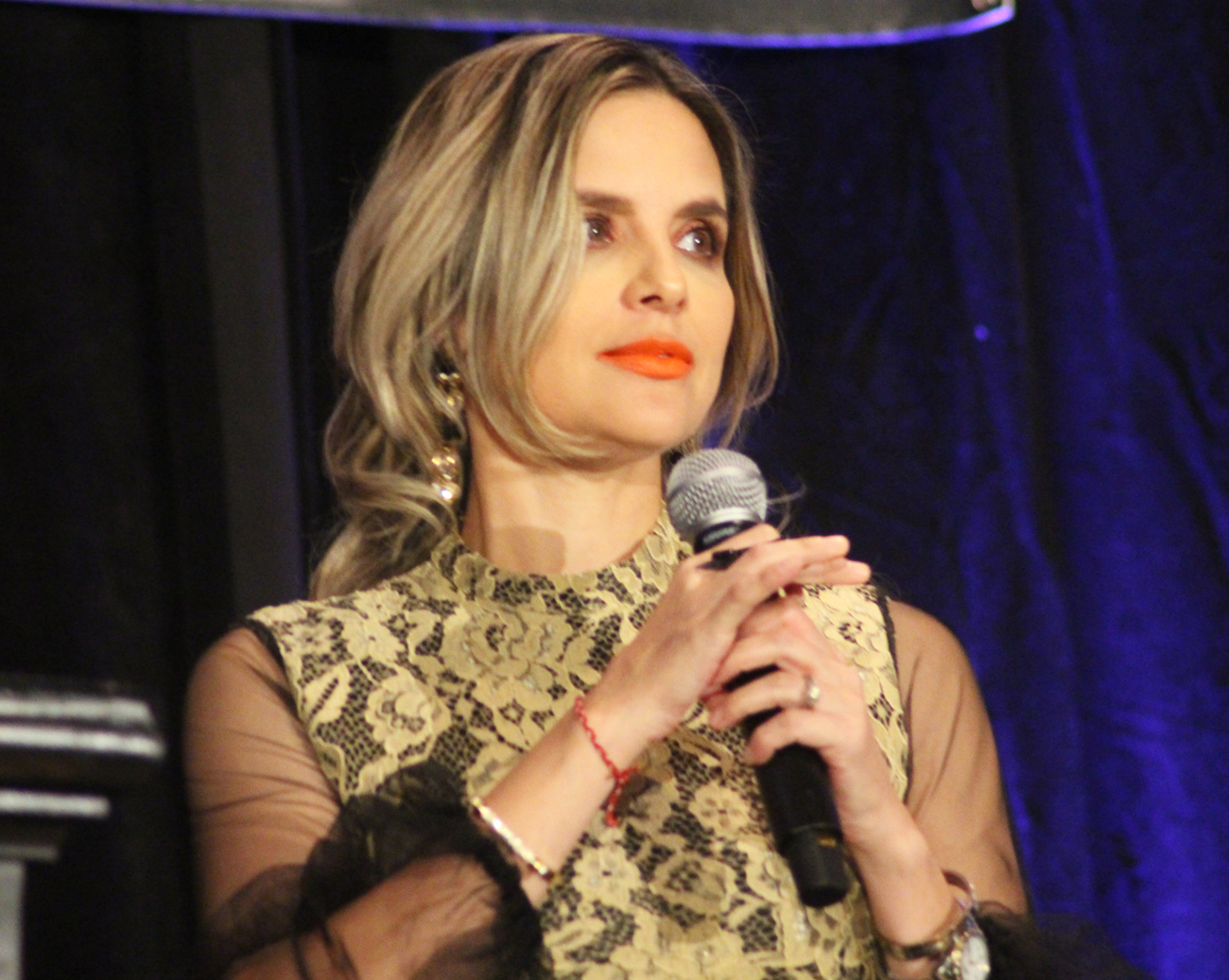 Patricia Sandoval, host of EWTN’s “Pro-Life Report” and keynote speaker at the Nov. 21 Stand Up For Life Dinner, had three abortions and worked for Planned Parenthood before dedicating herself to “defending life with all (her) heart.” (Gina Christian)

Thinking she was being “responsible and smart” by using artificial contraception, Sandoval found herself in a vicious cycle of sexually intimate dating relationships that led her to seek three abortions in less than two years. Panic and peer pressure contributed to her decisions, she said.

Despite repeated assurances from abortion clinic staffers that her unborn babies were “just a clump of cells,” Sandoval and her partners experienced the effects of post-abortion syndrome, a condition abortion providers “hide” from clients, she said.

For Sandoval, post-abortive anxiety, shame and grief manifested themselves through anorexia, suicidal thoughts and compulsive hair pulling that left her virtually bald.

‘One step before hell’

But it was her tenure at an abortion clinic that plunged her into despair – and enabled her to “see the truth,” said Sandoval.

A bilingual medical receptionist, Sandoval said she was hired by Planned Parenthood as an “illegal nurse” to assist with one California site’s largely Mexican clientele. As part of her training, she was instructed to avoid terms such as “baby” that would “give human dignity” to preborn children, she said.

Sandoval said she was also warned to “never let patients look at the screen” during ultrasounds, and to “never tell a soul what you see,” or to “tell the mother that after their abortion we throw their babies away in the garbage.”

Sandoval said her heart was “shattered” by the sight of the aborted baby, which had “eyes, a nose and a mouth … open wide and … screaming to defend itself, to live.”

“Working behind the doors of an abortion clinic is one step before going to hell,” she said.

Asked to assist at an abortion for a girl “six months pregnant with twins,” Sandoval said she “ran out of that place and … never went back.”

Traumatized by what she had seen at the clinic and by the memories of her own abortions, Sandoval became addicted to cocaine and then methamphetamine “to numb the pain.”

Eventually, she ended up living on the street for close to three years — “a dead woman walking,” she said — until a Christian waitress, seeing her in distress, helped reconnect her with her family and her faith. Resources such as Rachel’s Vineyard retreats enabled Sandoval to find forgiveness and healing for her abortions.

‘A battle for the soul of our nation’

Now married and expecting her second child with her husband, Sandoval said she decided to “repair all the damage (she had) done” by working to “defend life with all (her) heart.”

Such advocacy is more critical than ever, said Father Walsh, since pro-life supporters “are in a battle for the soul of our nation and for the human rights of the unborn.” 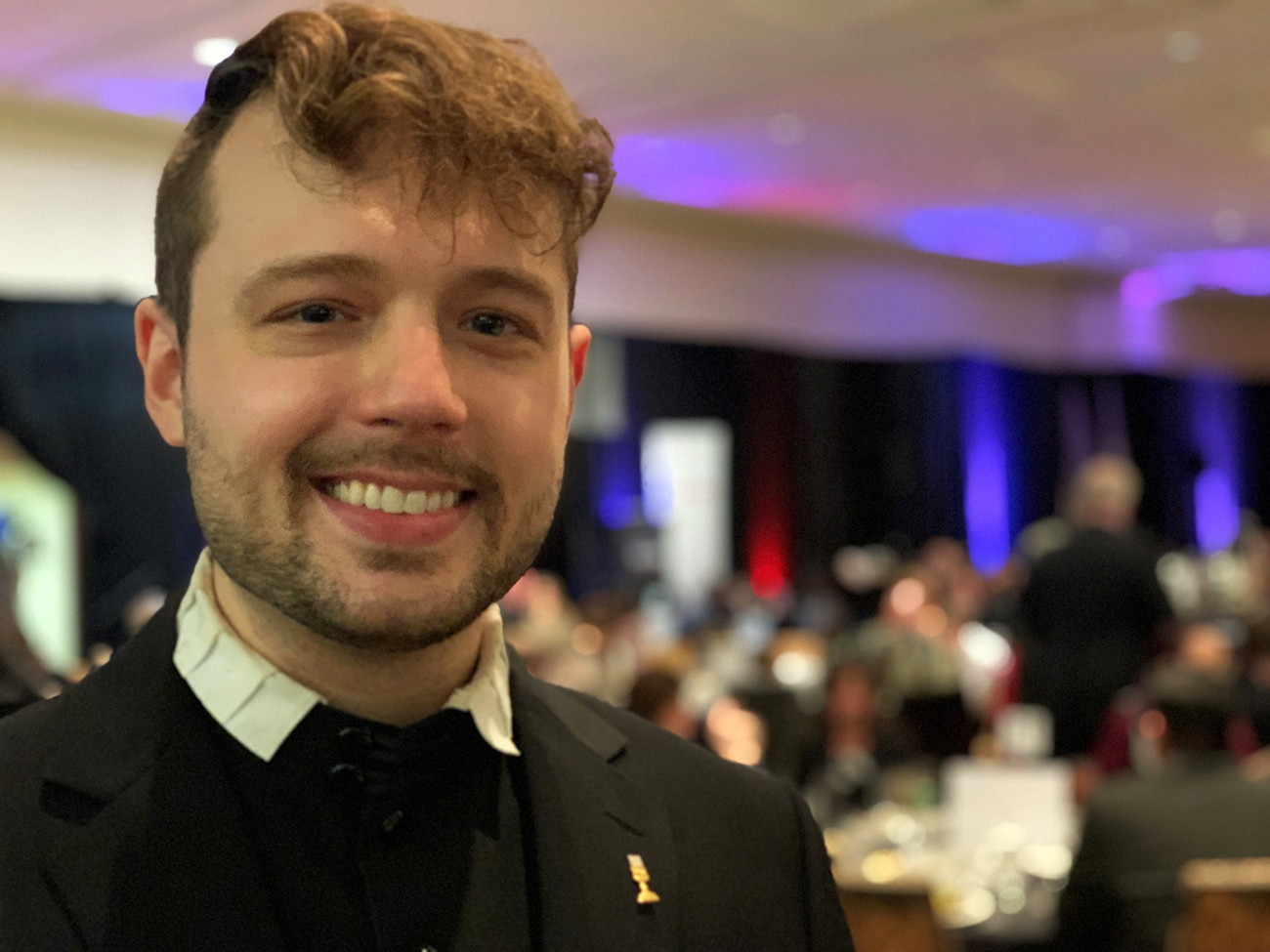 Joseph Mosko of St. Francis Xavier Parish (The Oratory) in Philadelphia said “knowing how to talk to our friends about Christ” can draw others to embrace a pro-life stance. (Gina Christian)

On Dec. 1, the Supreme Court is scheduled to hear opening arguments in Dobbs v. Jackson Women’s Health Organization, a case that could overturn the Roe decision – but even then, “that’s when the work is going to begin,” since the issue will “go back to the states,” said Bishop Coffey. “We have to stay really focused and committed.”

Through initiatives such as Guiding Star Ministries and The Cenacle at the Padre Pio Prayer Center, both in Philadelphia, PLU has helped hundreds of women, infants, children and fathers by providing shelter, food, clothing, diapers and parenting education, he said.

Stevens announced the PLU plans to “double the number” of Sidewalk Servants, who volunteer to pray and offer pro-life resources to women visiting Philadelphia abortion centers.

Anne De Santis, director of the St. Raymond Nonnatus Foundation, said she and board president Mickey Kelly “make it a point” to pray each week before such clinics.

Educating children about Catholic teaching on human sexuality is essential, said Ellen Giangiordano of St. Margaret Parish in Narberth, who prior to the dinner provided free copies of her 2014 book “Wonderfully Made! Babies,” co-authored with Dr. Lester Ruppersberger and illustrated by Lorraine Williams.

As a young adult with a 29-year-old sister “severely disabled” from infancy, Mosko said he knows firsthand how “atheist and agnostic friends” can question the fundamental right to life.

“I ask them, ‘Do you think that her life is worth less than yours?’” he said. “And they usually can’t answer.”

While he finds it “very hard to imagine there will be a mass conversion to the pro-life cause,” Mosko believes “just knowing how to talk to people” – what St. John Henry Newman called the “personal influence” of “unconscious holiness” – will turn the tide.

“We could throw books at people … but unless we know how to talk to our friends about Christ, it doesn’t mean anything,” he said.

“The greatest investment … we can make on earth is the pro-life movement,” she said. “When one baby is saved from abortion, the whole lineage is saved. And we’re here to save generations.”