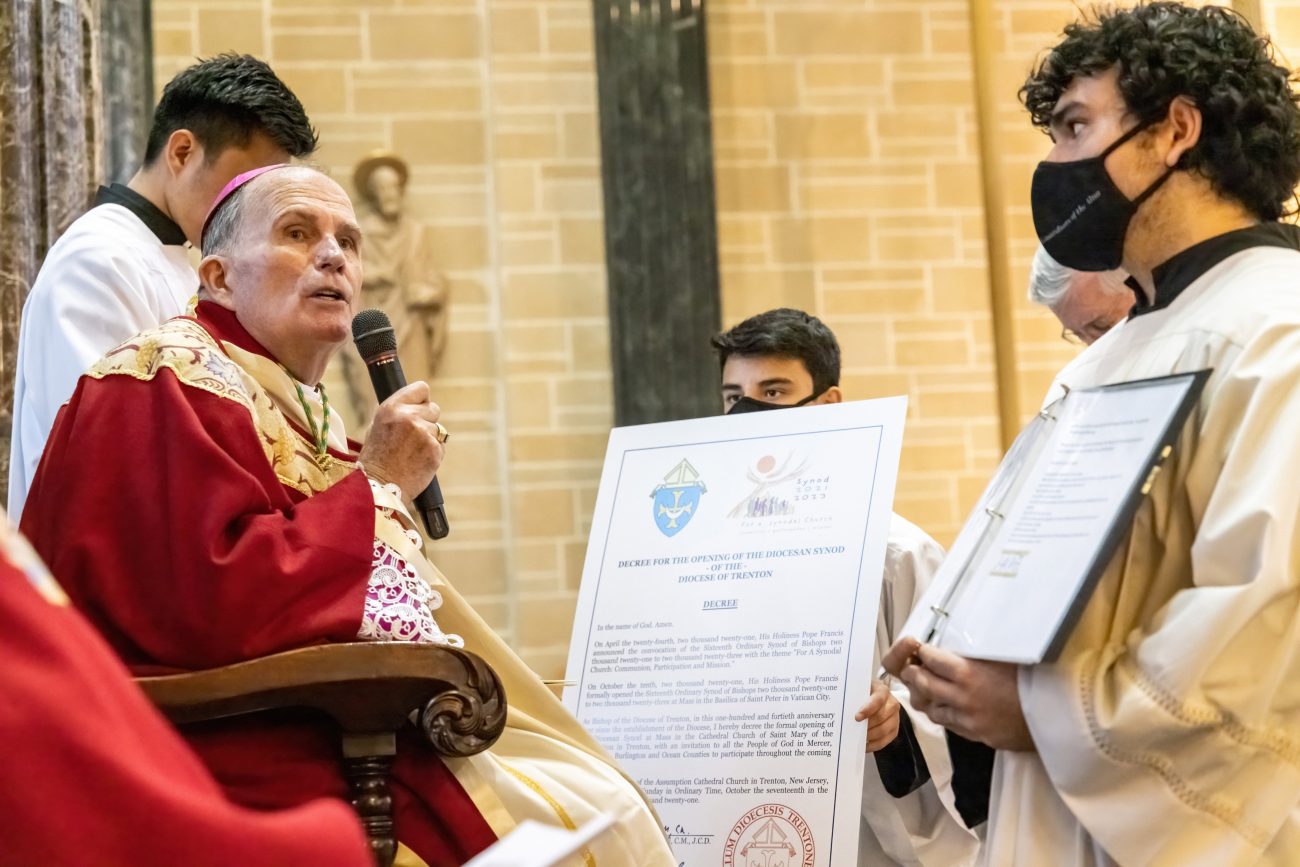 Bishop David M. O'Connell of Trenton, N.J., officially began the local process for his diocese's participation in preparations for the 2023 meeting of the world Synod of Bishops on synodality during Mass in St. Mary of the Assumption Cathedral in Trenton Oct. 17, 2021. (CNS photo/Hal Brown, The Monitor)

TRENTON, N.J. (CNS) — Bishop David M. O’Connell of Trenton invited Catholics to join Pope Francis in “walking the same road together” to help discern the church’s role in the world.

Speaking during Mass Oct. 17 at St. Mary of the Assumption Cathedral that marked the opening of the local phase of the churchwide synodal process, Bishop O’Connell said the pope has invited the faithful on a journey that leads to “communion, participation and mission.”

The Mass also commemorated the 140th anniversary of the diocese.

The bishop said the synodal process is an effort to hear from people throughout the church and is not simply focused on a single event, but rather “upon a continuing process that is called synodality.”

In his homily, Bishop O’Connell recounted the pope’s April 24 announcement calling for a world Synod of Bishops on synodality in October 2023, preceded by a two-year process that will allow for reflection on the nature and goals of the Catholic Church in the third millennium.

The entire process, the bishop explained, will have three phases: a diocesan phase, “which begins today;” a continental or national phase; and a phase for the universal church when the Synod of Bishops takes place.

Bishop O’Connell also described the “beautiful coincidence” that allowed the diocese to mark its 140th anniversary the same day “when we join the church’s dioceses throughout the world to embark upon our synodal ‘common path.'”

As the diocese celebrates its history, the bishop said the coincidence reminded him of the words of British writer and lay theologian C.S. Lewis: “There are far, far better things ahead than we leave behind.”

“That does not mean we forget the joys and sorrows, the successes and failures, the people and event of the past, but, rather, that it does not end there,” he said. “We take hold of the present moment and look to the future as a church, as the people of God, as a diocese, as parishes as Catholics journeying together.”

Bishop O’Connell also referred to the Oct. 10 Mass at St. Peter’s Basilica at the Vatican during which Pope Francis opened the worldwide synodal process. In his homily, the pope asked faithful around the world “to use this synod as a time for ‘encounter,’ for opening ourselves up to the Holy Spirit in prayer, eucharistic adoration, in hope and charity, ‘journeying together’ with one another.”

Continuing to quote the pope’s homily, Bishop O’Connell said the process is “a time for listening and not judging, for opening our hearts and minds to God and to one another in the midst of the challenges we find in the world around us. For discerning what the Holy Spirit is saying to us today.

To the faithful seated before him and those who were watching from home online, Bishop O’Connell encouraged them to see the diocesan synodal process as a time to “rediscover your faith.”

More than 40 priests, a dozen deacons, women religious, diocesan staff, Catholic high school students and laypeople from throughout the diocese attended the liturgy.

Afterward, Mass participants reflected on what they had heard and experienced.

Some like Jen Petro, the wife of Deacon Salvatore Petro of Our Lady of Sorrows-St. Anthony Parish in Hamilton, New Jersey, said she was glad to be part of what Bishop O’Connell called “an historic day” and that her curiosity is piqued to learn more as the synodal process progresses.

Young people of the diocese expressed pride in being part of the historic event.

“I think it’s important to have youth representatives. We are very strong in our faith,” said Kitty Vernon, a senior at Notre Dame High School in Lawrenceville Township, New Jersey, and a member of the school’s campus ministry.

“I think it’s important that all people are represented and that the youth have a voice,” she told TrentonMonitor.com, the diocese’s online news site. “We are the next generation of the church and it’s important to look at what happened in the past and look at what’s happening now so that we can look to the future.”

Stadnyk and O’Connor are associate editors of TrentonMonitor.com, the online news site of the Diocese of Trenton.

NEXT: Divided court considers role of chaplains in the execution chamber