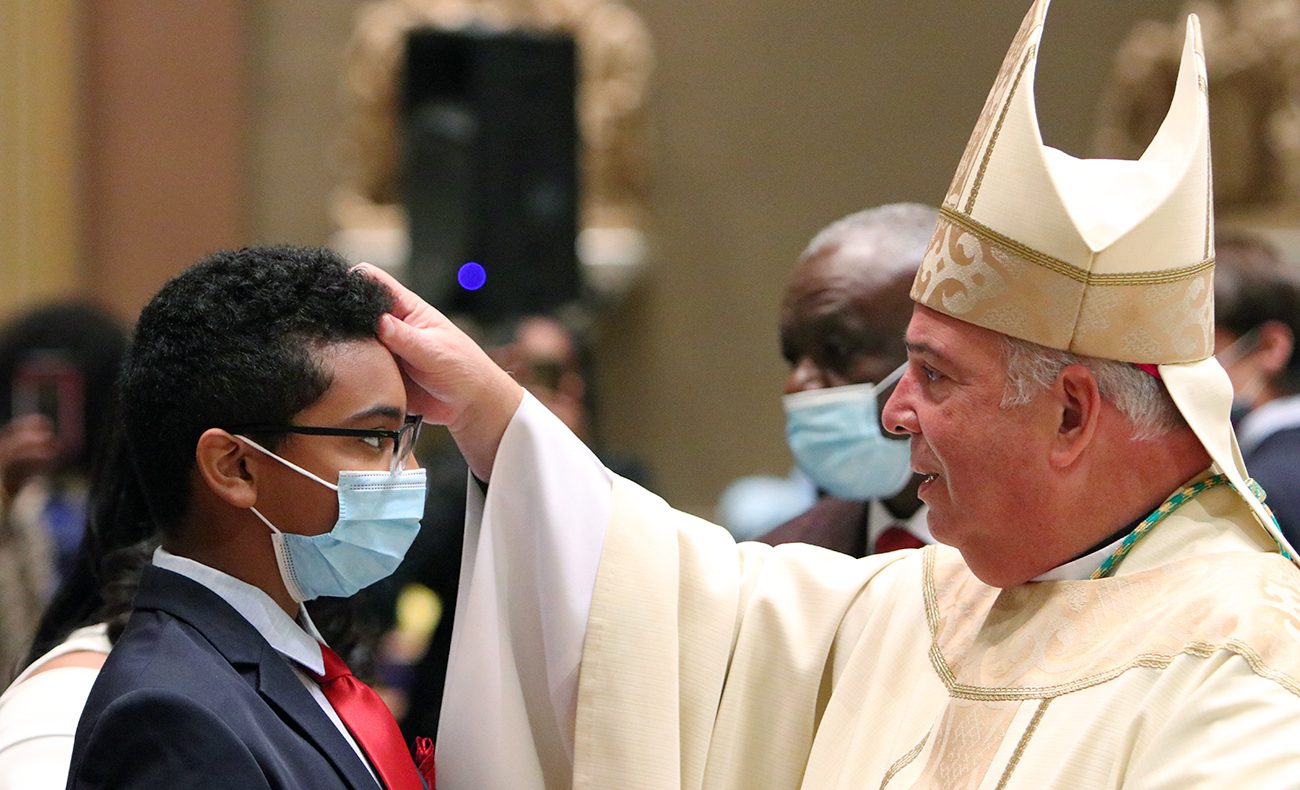 Archbishop Nelson Pérez administers the sacrament of confirmation for a teen during the 59th annual St. Martin de Porres Mass Nov. 7 at the Cathedral Basilica of SS. Peter and Paul in Philadelphia. (Photo by Sarah Webb)

WASHINGTON (CNS) — The U.S. bishops approved a revised English edition of the Order of Christian Initiation of Adults.

Under a separate action, they also did the same with a revised edition in Spanish.

Both actions took place Nov. 17, the second day of two days of public sessions during their Nov. 15-18 fall general meeting in Baltimore.

The English version passed 215-0 with two abstentions. The Spanish version passed 218-3 with one abstention. Both needed two-thirds of the U.S. Latin-rite bishops’ approval; they still require a subsequent “confirmatio” and “recognitio” by the Vatican Congregation for Divine Worship and the Sacraments.

However, for those adults joining the church at the Easter Vigil, there continue to be several rites they go through to mark their emergence as full members of the Catholic Church. (The Spanish edition will retain its acronym of RICA, for Ritual de la Iniciacion Cristiana de Adultos.)

Archbishop Leonard P. Blair of Hartford, Connecticut, chairman of the bishops’ Committee on Divine Worship, reminded the U.S. bishops they had authorized in 2019 a new translation of the texts used in the RCIA/OCIA by the International Commission on English in the Liturgy. The texts of the now-approved revisions run more than 250 pages in each language.

“While most of our liturgical books follow the arrangement of the Latin edition very closely, the RCIA is an exception; the edition used in this country since the 1980s rearranges the material substantially to make it more ‘user-friendly,'” Archbishop Blair said in an introductory message to the bishops.

“Our current book also supplements the material significantly, mostly for the sake of bringing already-baptized people into the church,” he added, noting the Latin edition focuses almost entirely on the non-baptized.

The U.S. experience differs significantly. While some enter the church needing all three sacraments of initiation — baptism, confirmation and Communion — some have already been baptized, either as Catholics or in another Christian faith, and Catholicism recognizes the baptism of nearly all other Christian denominations.

Still others may have been baptized and received the Eucharist, but never received the sacrament of confirmation.

In the English text, the Latin word for “candidate” is now split various ways depending on where the candidate is in the initiation process. “Terms such as ‘inquirer,’ ‘catechumen’ and ‘elect’ are now used,” Archbishop Blair said.

The Easter Vigil rites have also been adjusted, he noted, “with a particular emphasis on the validity of baptism received in other Christian communities,” he said. Another adaptation, Archbishop Blair said, takes into account “four distinct groups” entering the church: “catechumens, unbaptized infants, baptized Christians and baptized Catholics in need of confirmation.”

“The RCIA book that we’ve been using in the United States in the 1980s both reorders and supplements the Latin version extensively,” Archbishop Blair told the bishops Nov. 16. The revised version would preserve the reordering and supplementary material in the earlier book.

The rites now contains texts for the baptism of infants at the Easter Vigil. “Although rare, it does happen, and is certainly permitted,” Archbishop Blair said.

Any amendments made to either the Spanish text, approved in 1991, or the English version may need to be cross-checked to assure that each language’s text is saying the same thing, he said.

In years past, Catholic grade schoolers would be stumped by a what-if question: What if a kid walking to church on his way to being baptized is hit by a car and killed? Does he go to heaven because of the intent to be baptized, or does he go to limbo because he still has Original Sin?

The text to the OCIA now provides a clue on page 11: “If they die during their catechumenate, they receive a Christian funeral.”

NEXT: Review of charter for protecting youth to start 3 years early