Catholic leaders speak up against Oklahoma’s first execution since 2015 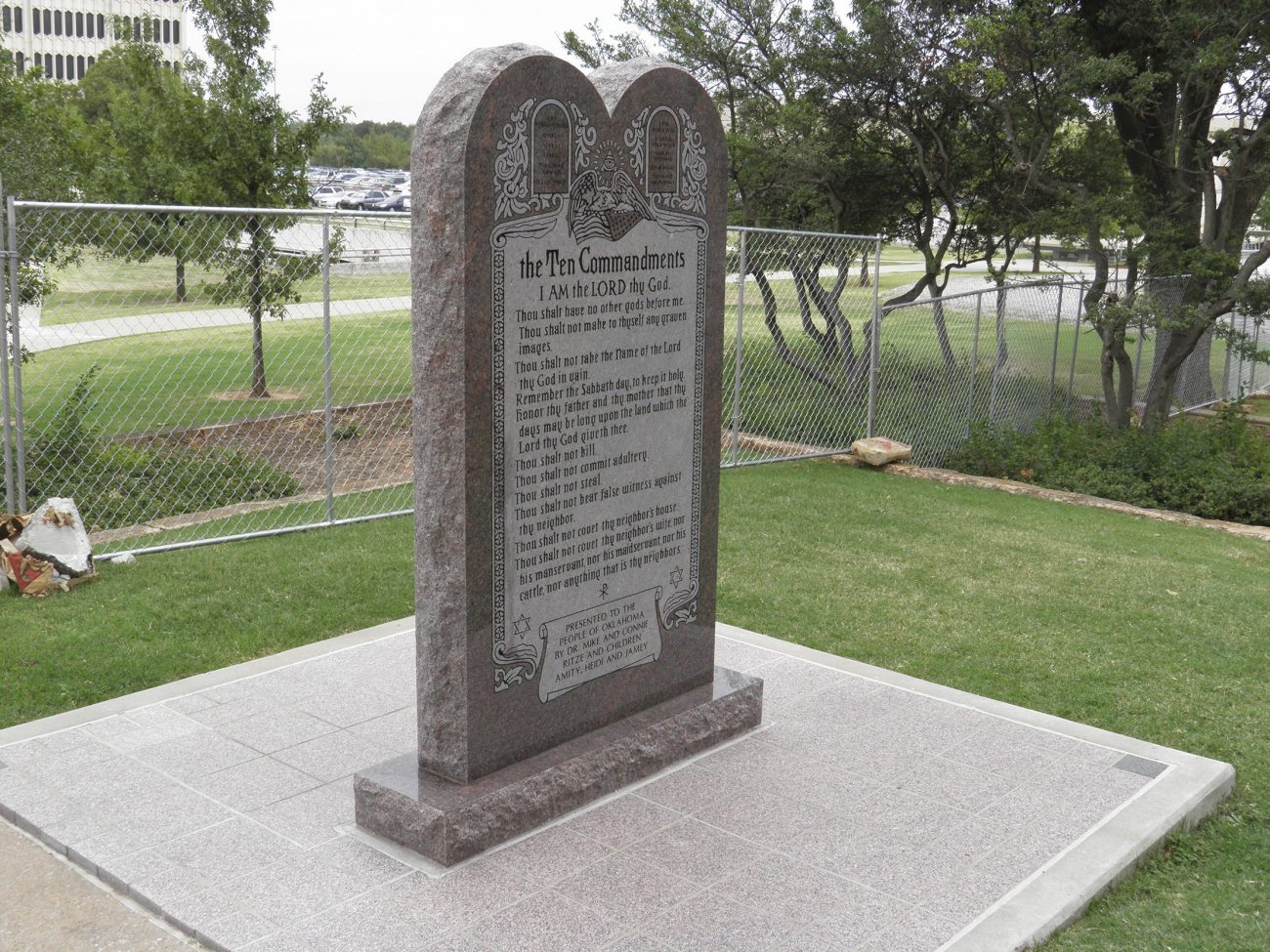 A Ten Commandants monument is seen in a fenced-off section of the Oklahoma Capitol grounds in Oklahoma City Sept. 30, 2015. The state executed death-row inmate John Marion Grant by lethal injection Oct. 28, 2021. Witnesses said Grant, who was convicted in 2000 of first-degree murder, died vomiting and convulsing. It was Oklahoma's first execution since 2015. (CNS photo/Jon Herskovitz, Reuters)

WASHINGTON (CNS) — Catholic leaders spoke out against the execution of John Grant Oct. 28 in Oklahoma — the first execution carried out by the state in six years.

A reporter’s account of the execution said Grant’s body repeatedly convulsed, and he vomited multiple times before he was declared unconscious at 4:21 p.m. CT at Oklahoma State Penitentiary in McAlester.

“Oklahoma’s lethal-injection protocol causes immense suffering. This will not be covered up,” tweeted Sister Helen Prejean, a Sister of St. Joseph of Medaille, who is a longtime opponent of the death penalty.

She added: “There is no humane way to kill a conscious, imaginative human being. We need to end the death penalty.”

Krisanne Vaillancourt Murphy, executive director of Catholic Mobilizing Network, said: “The excessive pain and suffering experienced by John Grant during his execution last night warrants an immediate halt to the six pending execution dates in Oklahoma through March of next year.”

She also said in an Oct. 29 statement that “Oklahoma’s track record for botched executions is nothing short of horrendous.”

Grant was sentenced to death in 2000 for killing a prison cafeteria worker in 1998 with a homemade knife while he was serving a prison sentence for several armed robberies, according to The Associated Press.

In a statement just after Grant’s execution, Oklahoma City Archbishop Paul S. Coakley said: “There are other ways to administer just punishment without resorting to lethal measures.” He also said the “unnecessary rush to restart executions in Oklahoma by the governor and attorney general is concerning and disappointing.”

Grant’s execution was permitted to move forward through an Oct. 28 order by the Supreme Court. The court was responding to an emergency request from the state asking that a stay on Grant and another inmate be lifted.

The state argued that Grant and the other inmates had not properly identified an alternative method of execution as required by Supreme Court precedent.

The court’s 5-3 decision lifted stays of execution for Grant, 60, and another death row inmate, Julius Jones, who is scheduled to be executed Nov. 18. The lower court ruling had stopped these executions over concerns the state’s lethal-injection protocols could cause cruel and unusual punishment.

Justices Stephen Breyer, Sonia Sotomayor and Elena Kagan dissented. Justice Neil Gorsuch did not take part in the decision, recusing himself since as a former judge on the 10th Circuit, he had been involved in litigation challenging the lethal-injection protocol.

“The Supreme Court’s decision to trust Oklahoma with a brand new lethal-injection protocol after a history of gruesome botched executions is a terrible error and a miscarriage of justice,” Sister Prejean said.

More than two dozen Oklahoma death-row inmates have been part of a federal lawsuit challenging the state’s lethal-injection protocols, arguing that the three-drug method risks causing unconstitutional pain and suffering. A trial is set for early next year.

Vaillancourt Murphy pointed out that “there is no humane way for the state to take a life and all methods of execution violate the Catholic Church’s teaching on the dignity of the human person,” but “Oklahoma’s protocol has proven itself particularly egregious.”

In an Oct. 7 statement, Archbishop Coakley pointed out the state’s upcoming executions were coming at a time “when a federal court has agreed to look at the state’s problematic lethal-injection protocol as part of a pending lawsuit that questions the constitutionality of a lethal-injection drug meant for anesthesia.”

“This provides an opportunity for Oklahoma to stop the use of capital punishment and to use other means to protect society and seek justice for victims of crime and their families,” he added.

The archbishop also noted that “executions anywhere are cause for lament, but in Oklahoma especially, they raise serious concerns. Our state bears the unfortunate reputation of executing the most people per capita in the modern death penalty era. What’s more, in recent years, Oklahoma has been home to several gruesomely botched executions.”

He emphasized that opposition to the death penalty does not mean being soft on crime.

“Rather, it is to be strong on the dignity of life,” he said. “The burdens of trauma and violence weigh heavy in our country and world these days; this is our opportunity to reject a culture of death and build up a culture of life.”

NEXT: Those ‘centered on Eucharist’ always have sense of gratitude, says cardinal