Those ‘centered on Eucharist’ always have sense of gratitude, says cardinal 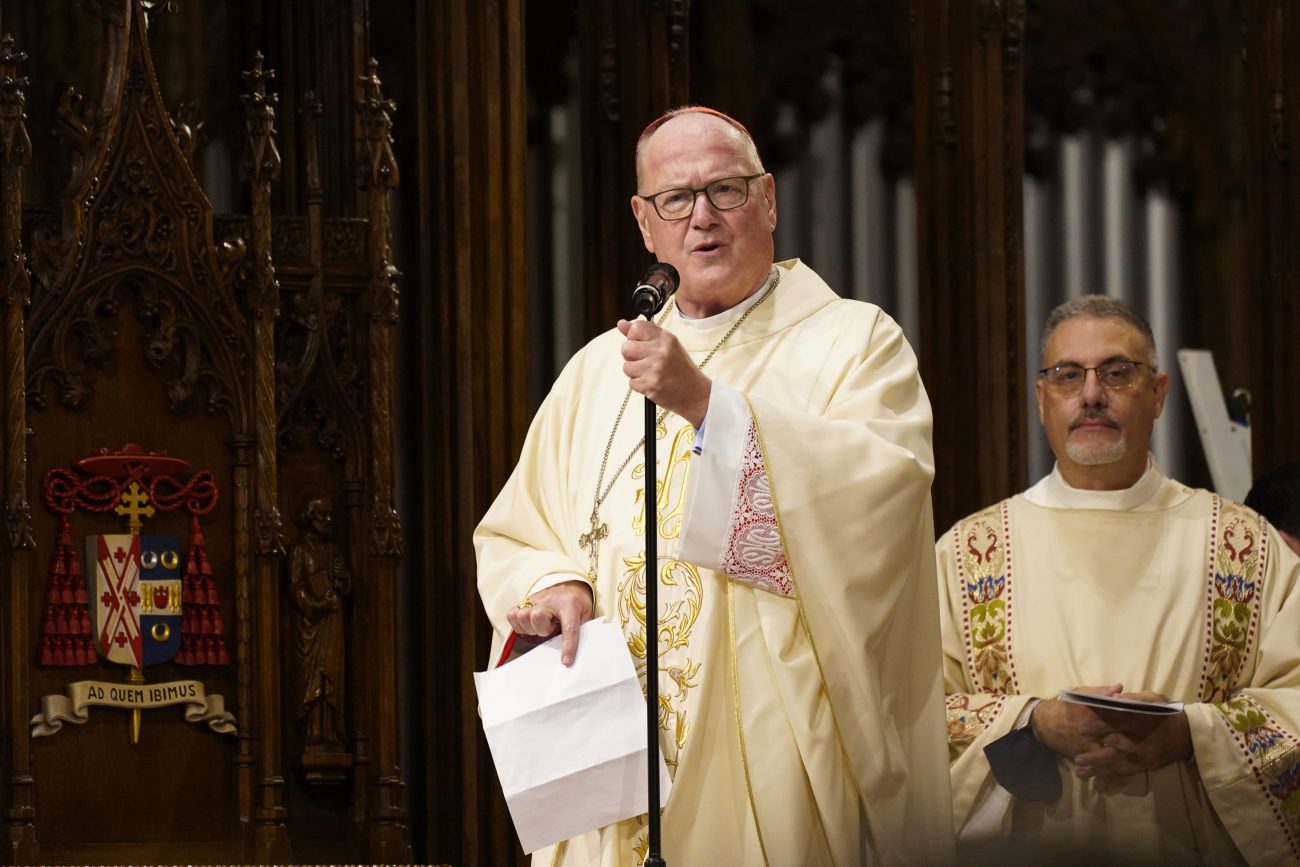 New York Cardinal Timothy M. Dolan told a Catholic audience at the U.S. Naval Academy that he is apprehensive about “the lack of gratitude festering in our culture of entitlement” and there’s an urgency for us to “rediscover a sense of gratitude.”

If we don’t, “we will eventually conclude that life isn’t all that joyful, meaningful and sacred. We will not believe the world is, to borrow a phrase from Ernest Hemingway, ‘a fine place and worth fighting for,” he said.

“Gratitude allows us to hold close what we have received, how unique human life is because of folks and selfless deeds of the past … moms and dads, grandparents and family, churches, teachers and coaches, friends and neighbors … and, the Lord,” he said in an evening address Oct. 26 to Catholic midshipmen and other members of the academy’s Catholic community.

“Recognizing what others have provided us is to inspire a way a living, where selflessness comes before selfishness, where others of the past and the now, including the Other, almighty God, have a hidden claim on our allegiance,” he said, “where we act in hope that the next generation will look back upon us with the same whispered appreciation we foster for those … who have walked before us.”

The New York Archdiocese provided a text of the cardinal’s remarks to Catholic News Service.

“People centered on the Eucharist will always be grateful,” he said. “Every Sunday finds them, heads bowed, whispering prayers, on their knees, the first day of the week, praising their gracious God for his countless gifts.

“We confess we’re sorry for taking them for granted, and for not living as grateful sons and daughters; we confidently present our needs to a Father ever ready to listen; we entrust to him the intentions of our families, friends, fellow service women and men, our country, our church, and the sick and the poor.” 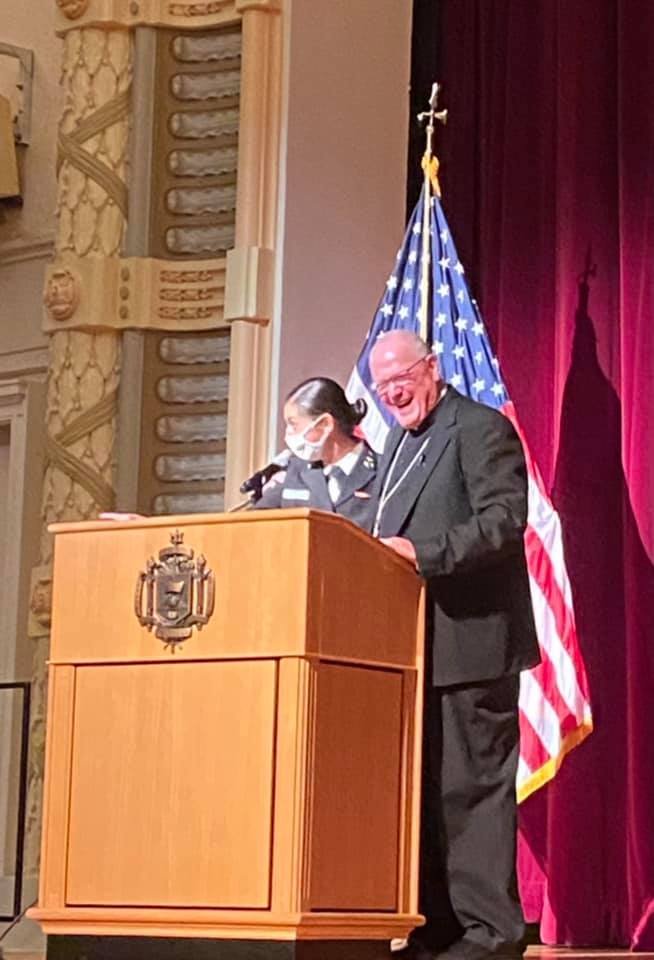 He noted the academy’s Catholic community has begun a Year of the Eucharist, in response to an invitation from the U.S. bishops for all Catholics “to renew our faith in, our love for, and our hunger for the Bread of Life, the Real Presence” in the Mass and Communion.

“At every Eucharist, we unite with the sacrifice of his Son on the cross in thanking his Father for the salvation offered us,” he said. “Never are we more people of gratitude than when gathered at the Sunday Eucharist. And we leave more thankful than ever as we have received the gift of Christ himself in holy Communion.”

Cardinal Dolan asked his listeners if his hunch was right that “men and women in uniform have an innate, inbred sense of gratitude?”

“Am I on to something when I propose that the words of Jesus, ‘Greater love than this no one has than to lay down his life for another,’ as he himself did on the cross, renewed at every Eucharist, are part of the DNA of one whose career is summed up in one word, ‘the service’?” he added.

He said Christianity “is oozing with words that mean ‘thanks.'”

“We are exhorted to love one another, to be people of fidelity toward God, to forgive those who offend us, to cherish and look out for those who need us, who are vulnerable, who need defending,” he explained. “All those noble promptings are closely allied to gratitude, for our families and country, for a God who sacrificed the life of his only begotten Son so that we might live forever.”

Gratitude “is a traditional value,” he said, which “allows us to appreciate how things are, what has already been given, and how blessed life is because of people and goodness we have only inherited, not earned.”

Ingratitude “will eliminate values essential to a civilized society, values such as duty, honor, valor, integrity, service and sacrifice,” he said.

Civilization, “a culture of love and life,” and our country need gratitude. “The ability to say thanks is a sublime gift,” he added.

Cardinal Dolan opened his address by expressing gratitude for being invited to the Naval Academy to deliver what was the John Cardinal O’Connor Lecture, and he recalled his own connection to the Navy — through his father Robert Matthew Dolan, who he said was “humble” about his service.

“He proudly served his country in the U.S. Navy in the Pacific in 1943-1946, on the USS Cleveland, seeing action in war zones with such names as Guadalcanal, Iwo Jima, Okinawa, Manila and Tokyo,” the cardinal said.

The prelate also paid tribute to Cardinal O’Connor, his predecessor as archbishop of New York and a churchman who served God and country as a Navy and Marine chaplain. He headed the New York Archdiocese from 1984 until his death in 2000. He was made a cardinal in 1985.

“He of course treasured his identity as a disciple of Our Lord and Savior Jesus Christ, a faithful Catholic, a priest, a bishop,” he said, “but the title he most relished was not ‘His Eminence,’ but ‘Chaplain’ and ‘Admiral,’ and the years of service he most savored was as chaplain here at the Naval Academy.”

He later was named the bishop of Scranton, Pennsylvania, then was named to New York.

Ordained a priest of the Archdiocese of Philadelphia, his home diocese, then-Father O’Connor first joined the U.S. Navy Chaplain Corps in 1952 during the Korean War.

PREVIOUS: Catholic leaders speak up against Oklahoma’s first execution since 2015