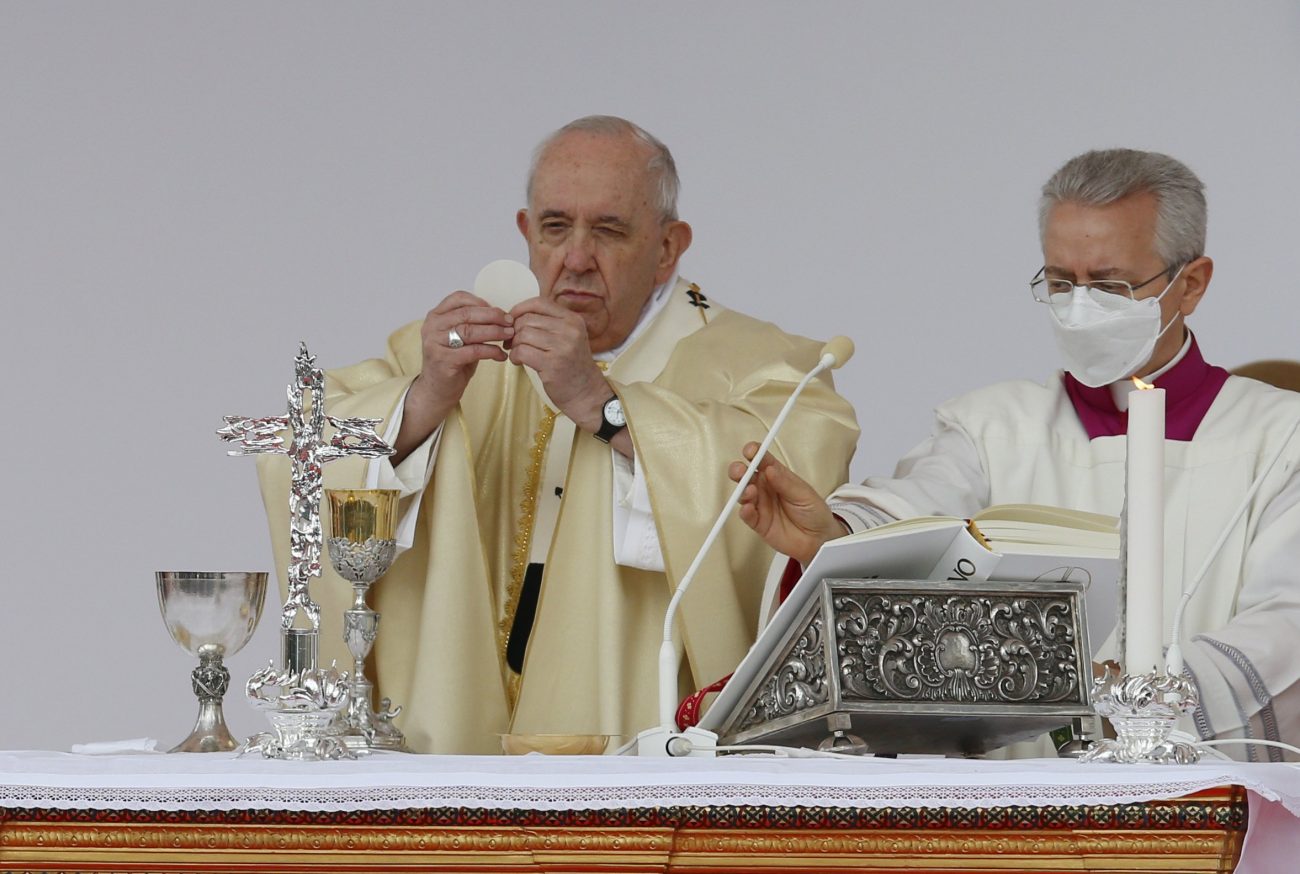 Pope Francis holds the Eucharist as he celebrates Mass at the Catholic University of the Sacred Heart in Rome Nov. 5, 2021. (CNS photo/Paul Haring)

WASHINGTON (CNS) — The U.S. bishops’ proposed statement on the Eucharist “cannot be partisan,” nor should it be made such “through calculated expression or calculated suppression of our doctrine and belief,” said the head of the bishops’ National Advisory Council.

“The Eucharist cannot be a tool for division, cannot be ideological,” said Mark Sadd of the Diocese of Wheeling-Charleston, West Virginia, who is chair of the council. He made the remarks during a Nov. 16 address to the bishops gathered in Baltimore for their fall general assembly.

The council’s members — a group made up of 32 laypeople, priests, women religious, and permanent deacons as well as four bishops — were briefed on the proposed statement Oct. 15, according to Sadd. The council, he said, did not come up with a consensus, but made comments voicing their “idiosyncratic” opinions on what the document should and should not contain.

The statement, Sadd said, has to be accessible “to those who wish to hear it and to those who do not.”

Some council members, he said, asked: “How will this (statement) be transmitted to the faithful? How will it be received, and how will pastors share it?”

One member noted the “compelling imagery of Pope Francis” with the Eucharist in the proposed statement, but was concerned that “his words might wrongly suggest that only the pandemic is keeping people from the Mass, when the pandemic only exacerbated” the situation, said Sadd.

A council member took note of the various “challenges to catechize the disbeliever, the nonbeliever, the alienated and the indifferent,” according to Sadd.

A priest member asked, “To whom is this document addressed?” said Sadd. “As a pastor, he is concerned that there is already division.”

Other, disparate views also came into play, added Sadd: That “there is a diminished sense of the supernatural”; the Eucharist is “just a piece of bread and not Jesus Christ”; a “failure to grasp why we need this” statement; that the bishops are “sidestepping their responsibility”; and that priests need “more clarity of what to do where there is open scandal.”

Still other comments voiced concern that the statement will “go over the heads of its readers if the purpose is to engage people with the Eucharist,” that it needs to be “more pastoral” than “theological or punitive” and that the document lacks “the golden thread” that should run through the full statement, Sadd said.

In his remarks, Sadd also said the council’s members reviewed 14 of the 15 action items on the bishops’ agenda and the items “received favorable majorities or supermajorities.” He did not specify the 15th, but the range of comments Sadd gave on the Eucharist statement indicates that was the lone holdout.

Apart from the proposed Eucharist document, Sadd spent most of his time on Catholic education issues.

The coronavirus pandemic, took a “financial toll” on Catholic schools, as marked by enrollment declines, and the closure of more then 200 schools, he said, noting the “disparate and negative effects on the poor.” Many, he added, “stretched themselves to stay open and give live instruction.”

Catholic schools are “instruments of evangelization,” Sadd said, adding that one National Advisory Council member quipped, “A catechized youth can catechize his parents.” Catholic education, he said, “must be made available to “the diverse and growing Latino communities.”

Too many schools have “failed to marshal the resources to survive,” Sadd said, and “dioceses and allied institutions … should apply the most modern financial resources” to help them, including state school-choice funds where available.

The bishops also should “support the Catholic home schooling lay movement,” Sadd added. “A remarkable lay movement within the church it surely has become.”

Further, he said, more coordination is needed between Catholic schools and parish religious education programs, “since 90% of our Catholic children do not attend Catholic schools.”

NEXT: Papal ambassador urges U.S. bishops to listen closely to the church