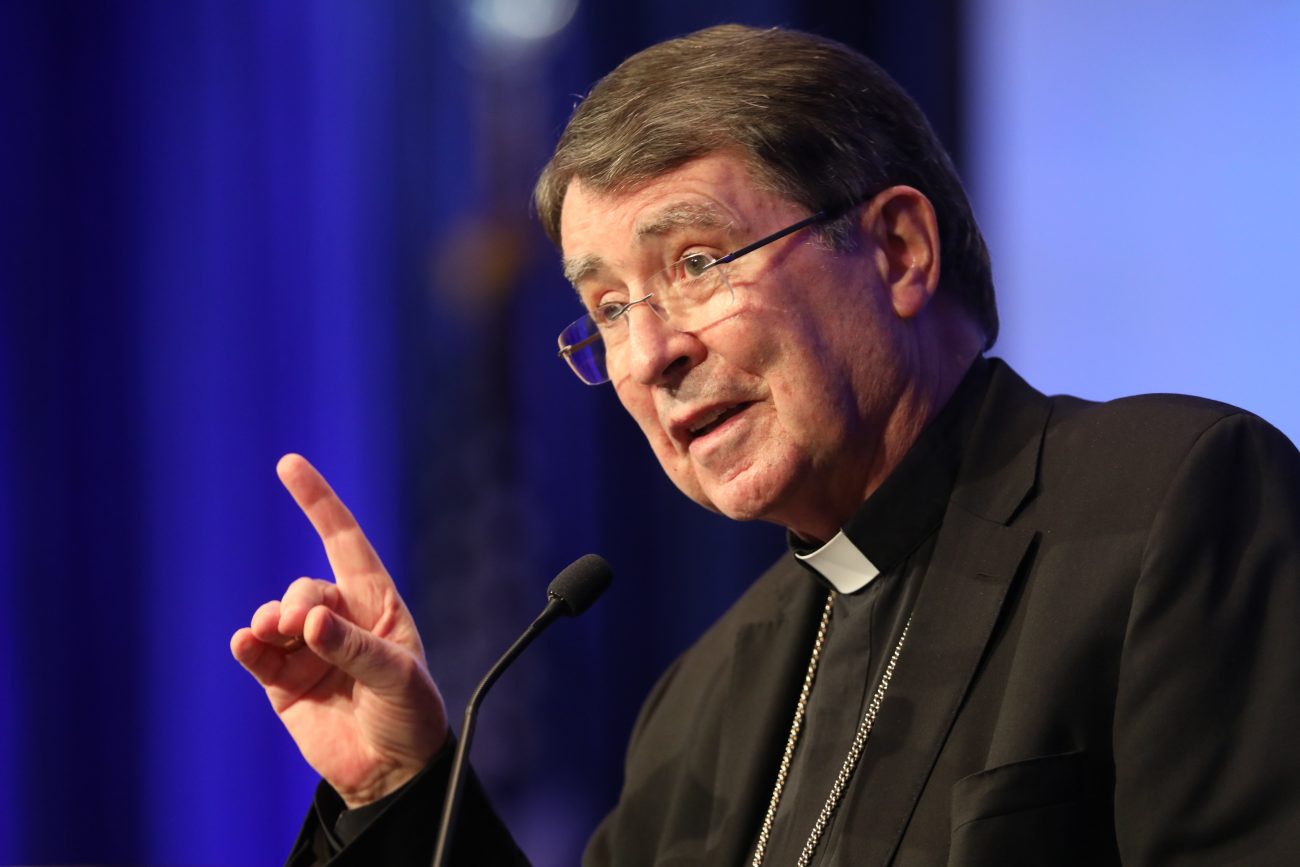 Archbishop Christophe Pierre, apostolic nuncio to the United States, speaks Nov. 16, 2021, during a session of the fall general assembly of the U.S. Conference of Catholic Bishops in Baltimore. Due to the COVID-19 pandemic, it is the first in-person bishops' meeting since 2019. (CNS photo/Bob Roller)

BALTIMORE (CNS) — Archbishop Christophe Pierre, the apostolic nuncio to the United States, spoke to the U.S. bishops Nov. 16 about the importance of listening to people in the church and being open to the work of the Holy Spirit.

He addressed the bishops on the first day of two days of public sessions at their fall general assembly Nov. 15-18 in Baltimore.

The archbishop noted that he has been in the role of apostolic nuncio for five years and has been on a journey with the U.S. bishops through challenges of religious disaffiliation, the sexual abuse crisis, increasing secularization, polarization within the nation and the church, and most recently the global pandemic.

He quickly jumped into discussing a topic fresh on the bishops’ minds from hearing about it the previous night at their opening Mass and one they will continue discussing in preparation for an upcoming world Synod of Bishops: synodality.

“I believe that synodality is an answer to the challenges of our time and to the confrontation, which is threatening to divide this country, and which also has its echoes in the church,” Archbishop Pierre said.

“It seems that many are unaware they are engaged in this confrontation, staking out positions, rooted in certain truths but which are isolated in the world of ideas and not applied to the reality of the lived faith experience of the people of God in their concrete situations,” he said.

To define this often-repeated word in church circles today, the nuncio explained what it is not. He said synodality is not “a meeting about meetings” and went a step further to jokingly say: “If that were the case, we would certainly be in one of the lower rings of hell in Dante’s ‘Inferno.'”

He stressed that the term — and what the church is engaged in right now in the listening phase in preparation for the 2023 synod — goes beyond the physical act of hearing people to actually being close to them.

For the bishops, he said, this process should start at home by listening to each other. “The church needs this attentive listening now more than ever if she is to overcome the polarization facing this country,” he said.

The bishops’ act of listening also is a means of leading by example to help U.S. Catholics be missionary disciples engaged in their own listening and discernment that he said should be a “way of life” in families, parishes, dioceses and on the periphery.

But for all this to happen, there also has to be overall unity because, he said, “a divided church will never lead people to where it should be.”

Throughout his half-hour address to the bishops, the nuncio continued to drive home the message that more needs to be done to bring the church to where it should be.

For example, when he mentioned that the church “should be unapologetically pro-life,” he stressed the need to look at causes and factors that lead women to seek abortions and then to reach out in practical ways to mothers in need.

Along that same line, he said the church needs to address racism and should go further with that by acknowledging “the lived reality” many in the church experience each day.

Also, regarding the Eucharist, he said people can have theological ideas about the Eucharist, which are important, but “none of these ideas compare with the reality of the eucharistic mystery, which needs to be discovered and rediscovered through the practical experience of the church, living in communion, particularly in this time of pandemic.”

The nuncio, hinting at a topic the bishops planned to address in their discussion of their proposed statement on the Eucharist, said many can “miss the true encounter” of the real presence of Christ in the Eucharist.

He also noted that there is “the temptation to treat the Eucharist as something to be offered to the privileged few rather than to seek to walk with those whose theology or discipleship is falling short, assisting them to understand and appreciate the gift of the Eucharist, and helping them to overcome their difficulties.”

Looking back and ahead, the archbishop, who was appointed U.S. nuncio in April 2016, reiterated that he and the bishops had “been on the road together for more than five years” and that they would journey forward, in unity, by “listening to one another and to the Spirit and walking with our brothers and sisters.”

“We will emerge from the present crises together,” he said, “as the church Christ has called us to be.”