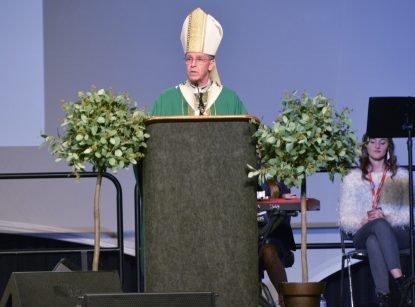 INDIANAPOLIS (CNS) — Before their Nov. 17 vote to approve a National Eucharistic Congress for 2024 and their choice of the city to host it, Indianapolis Archbishop Charles C. Thompson told his fellow prelates gathered in Baltimore, “If you give us the green flag to this project, we’ll be ready with the checkered flag.”

The bishops voted for a three-year National Eucharistic Revival that will begin in June and culminate with the congress July 17-21, 2024.

The 2024 event could be a pivotal moment for the Catholic Church in the U.S. — if it enters fully into the eucharistic revival, Archbishop Thompson said after the vote in an interview with The Criterion, the archdiocesan newspaper.

“Much will depend upon how well we prepare and pilgrimage to that moment and are prayerfully attentive to how the Holy Spirit will lead us beyond that moment,” he said. “The revival and the congress could have a profound effect on the renewal and enrichment of our eucharistic identity, witness and mission as church, stewards and disciples of Jesus Christ.”

The eucharistic revival planned by the U.S. Conference of Catholic Bishops’ Committee on Evangelization and Catechesis and approved by the bishops at their fall general assembly is scheduled to begin June 16, the feast of Corpus Christi.

The first year will get underway at the local and diocesan levels with such initiatives as eucharistic adoration and processions, the development of parish teams of revival leaders and conferences on the Eucharist.

The next year will be regional revival events, which will lead to the eucharistic congress in Indianapolis in 2024, the first to be held since one took place in 1976 in Philadelphia. It is expected to draw at least 80,000 from across the country.

Auxiliary Bishop Andrew H. Cozzens of St. Paul and Minneapolis, the USCCB committee chairman, spoke about the revival in an interview with The Criterion in September.

He noted that the eucharistic revival was developed in response to recent trends in the church and the broader society. Polling data in recent years suggests that a majority of Catholics in the United States no longer believe in the real presence of Christ in the Eucharist.

Mass attendance has also declined among Catholics in the U.S., a trend affected by the suspension of the public celebration of the Eucharist and other sacraments at the start of the coronavirus pandemic in 2020. When churches began to reopen, many dioceses made efforts to invite Catholics to return to the Mass.

Bishop Cozzens hopes the eucharistic revival can build on these efforts and inspire a wider eucharistic movement.

“Now we are ready and eager to engage the people who come to Mass daily, weekly or perhaps who still participate virtually to come to a deeper awareness of what the church teaches about Communion,” he told The Criterion. “It is not an ‘it’ in holy Communion. It is a real person: Jesus Christ.”

He also spoke of the goal of commissioning thousands of “eucharistic missionaries” at the congress.

“These men and women will be sent forth to continue the movement in parishes, the church and society at large,” he said. “They will help those who are currently attending Mass frequently to deepen their faith, as well as reach those on the margins who are far from Christ. We also want to hold a special place for the family in all of this.”

In Baltimore, Bishop Cozzens, who recently was named by Pope Francis Oct. 18 to head the Diocese of Crookston, Minnesota, told the bishops that Indianapolis had been one of three archdioceses that sought to host the congress — Atlanta and Denver were the other two.

Indianapolis was picked, he said, because of its experience in hosting large events such as the National Catholic Youth Conference. Indianapolis, he also noted, has the venues, hotel space and scheduling availability for such a large event. It also is within a day’s drive of approximately 50% of the U.S. population.

“Our people are well equipped to pull this off, and to do so with incredible class and Hoosier hospitality,” he said. “This is an opportunity to really draw from the rich fabric of our Catholic parish, schools, health care, outreach and associations. We are blessed with wonderful Catholic individuals and families.”

In Baltimore, Bishop Cozzens said the eucharistic congress will be structured similarly to World Youth Day, where multiple events will take place over a series of days in multiple venues.

The eucharistic congress can deepen the faith of Catholic in central and southern Indiana, said Archbishop Thompson, adding that the Eucharist “is the source and summit of all that we are about as Catholics — our identity, mission, ministries and services.”

The eucharistic revival and congress can “provide an occasion of grace to deepen our appreciation of the precious gift of Jesus Christ for our salvation.”