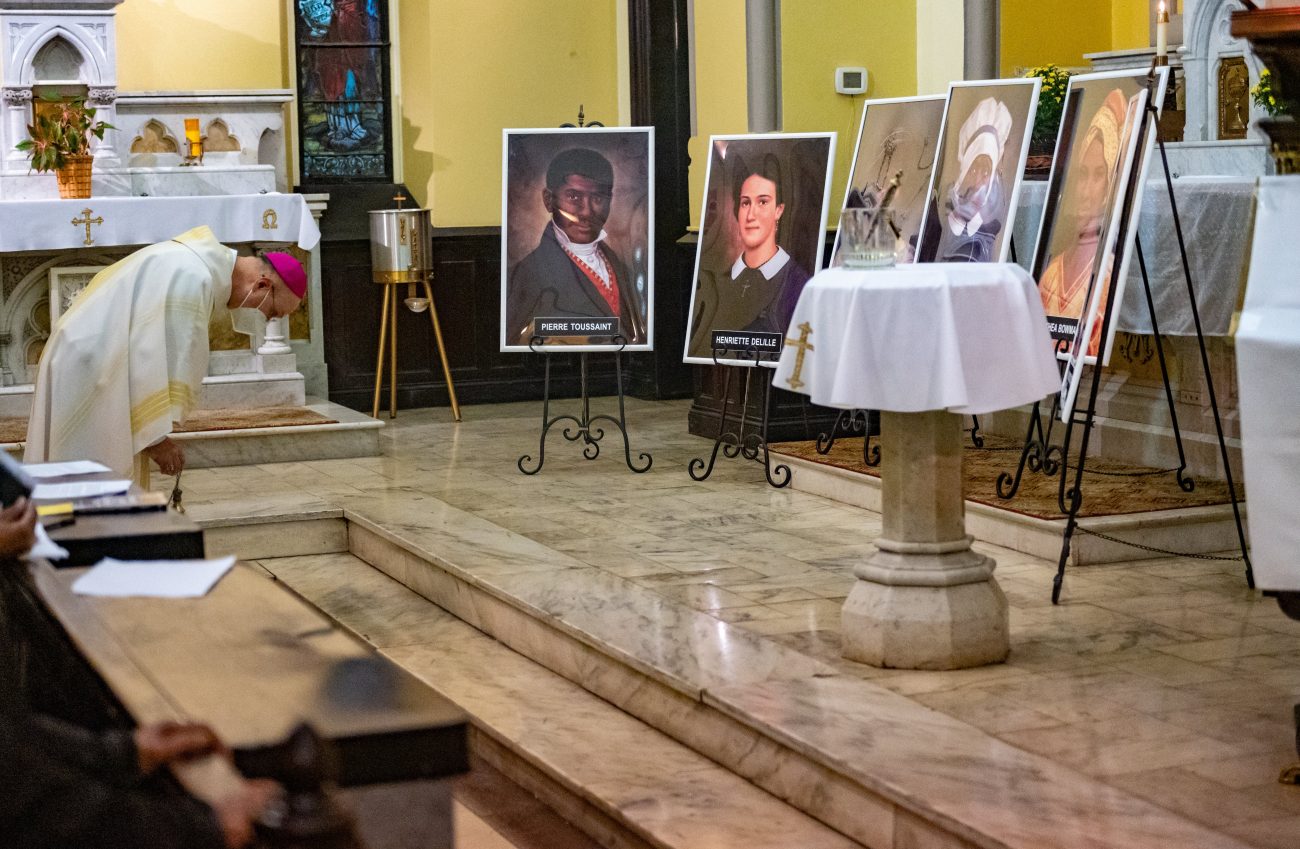 BALTIMORE (CNS) — When Sister Michelle Proctor was a young child, she was taught by the Oblate Sisters of Providence from grades three to 10.

The sisters’ hospitality and trust in Divine Providence inspired her to become a religious sister in their Baltimore-based order.

After 53 years of love and service for the Lord in the Oblate community, the current superior general of her religious community was honored to participate at St. Ann Church in Baltimore in a Nov. 1 procession of six candidates for canonization.

She held a portrait of the community’s foundress — and one of those sainthood candidates: Mother Mary Lange, who has the title “Servant of God.”

Five other members of the African American Catholic community processed to the altar holding portraits of the other prominent Black Catholics they hope will be canonized.

They are: Sister Thea Bowman, the first African American member of the Franciscan Sisters of Perpetual Adoration, and Julia Greeley, known as the city of Denver’s “Angel of Charity” — both have the title Servant of God — as well as Mother Henriette Delille, founder of the Sisters of the Holy Family, Father Augustus Tolton and Pierre Toussaint. The latter three have the title “Venerable.”

The title “Servant of God” is given by the church to a sainthood candidate when his or her cause is officially opened.

The first step in the process after that is the declaration of a person’s heroic virtues, after which the church bestows the title “Venerable.” The second step is beatification, after which he or she is called “Blessed.” The third step is canonization.

In general, for beatification one miracle needs to be accepted by the church as having occurred through the intercession of the prospective saint and a second such verified miracle is needed for canonization.

Following the procession, Auxiliary Bishop Bruce A. Lewandowski of Baltimore, the archdiocese’s urban vicar, celebrated a Mass for the feast of All Saints. Nearly 200 people were present.

The Mass was organized by a national campaign made up of members of three Baltimore parishes, St. Ann, St. Francis Xavier and St. Wenceslaus, as well as longtime members of St. Ann’s social justice committee.

The purpose was to create awareness and educate the American people about the stories of these six candidates for sainthood.

Members of the campaign are collecting signatures in a letter to Pope Francis asking him to expedite their canonization.

“While there are no U.S. African American saints, there are 11 white Americans who have been canonized,” the letter said. “We know there is a process, but it is not working for Black American Catholics and supporters. The process is reaping unfair, uneven results, especially when you realize that the six Black saints have been waiting 714 years totally if you add up the times since each died.”

Toussaint died 168 years ago, and a few of the others have been deceased for more than a century. Sister Bowman is the most contemporary, having died in 1990.

The letter asked the pope to canonize the six candidates “immediately.” “If not now, when?” it said. “If not you, who?”

Delores Moore, one of the leaders of the national campaign, a member of St. Ann’s social justice committee and a parishioner there, said the campaign started when parishioners serving the African American community realized only a few people knew about the lives of these African American holy men and women, who despite their struggles with systemic racism, remained loyal to God.

“Besides being historical, it is humbling to think that in all these years I am the first African American priest in the Archdiocese of Baltimore,” Father Sterling said. “It is a humbling call on God’s part.”

Many present knew Sister Bowman, including Father Sterling and Therese Wilson Favors, a longtime Catholic educator and former director of the Baltimore archdiocesan Office of Black Catholic Ministries, who carried the portrait of her friend and co-worker.

Wilhelmena Braswell, a St. Ann parishioner, met Sister Bowman in the Basilica of the National Shrine of the Assumption of the Blessed Virgin Mary in downtown Baltimore and said “her presence would light up the room.”

Bishop Lewandowski said that in the church there are saints for every community and every person, but not in the case of the African American community.

He invited the congregation to share with everyone the stories of these future saints, to make sure their parishes display pictures of them and to ask for their intercession.

The bishop said it is important to have Masses to celebrate African American saints because the faithful identify with saints who “look like us, spoke our language, lived our experiences and can understand our struggles.”

Although the process of canonization can be long and tedious, Bishop Lewandowski encouraged the congregation by reminding them, “We don’t make saints; God does.”

González de Doran writes for the Catholic Review, the news outlet of the Archdiocese of Baltimore.

NEXT: Gomez: Church must proclaim Christ ‘boldly’ in response to ‘woke’ movements