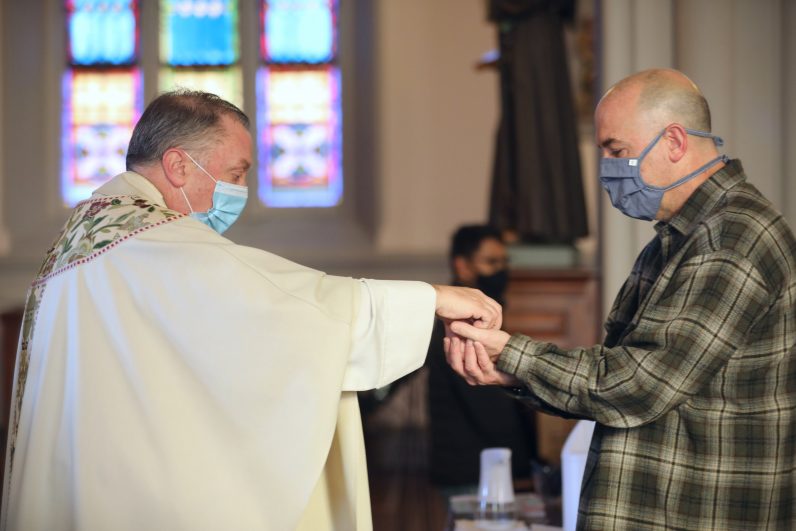 WASHINGTON (CNS) — At their June assembly, when the U.S. bishops debated a proposal to draft a statement on the Eucharist, some of the bishops asked whether it would address denying Communion to Catholic politicians who support abortion.

The draft of the statement sent to the bishops in October seems to put this question to rest, at least for now.

The statement has not been made public by the U.S. Conference of Catholic Bishops in advance of the Nov. 15-18 assembly of bishops. It was obtained by The Pillar and published Nov. 3 by the Catholic website.

The statement, at least in this current draft, does essentially what Bishop Kevin Rhoades of Fort Wayne-South Bend, Indiana, told bishops it would do.

In a recorded video this fall produced by the U.S. Conference of Catholic Bishops to further explain the document and the planned upcoming revival on the Eucharist, Bishop Rhoades said the document will focus on how “the Eucharist is our greatest treasure as Catholics” and will look at different aspects of the Eucharist, particularly how it illustrates Jesus’s sacrifice and is the real presence of Christ, not just a symbol.

The document, in its current form without amendments, does not specifically call out Catholic politicians who support abortion, including President Joe Biden, the second U.S. Catholic president, whose name came up during the June virtual meeting.

When the statement was first proposed to the body of bishops at their June assembly, some bishops said a strong rebuke of the president should be included in it because of Biden’s recent actions protecting and expanding abortion access, while others warned that this would portray the bishops as a partisan force during a time of bitter political divisions across the country.

At the end of their June discussion, Bishop Rhoades, who is chair of the Committee on Doctrine, said the document would not focus on denying Communion to people but on the importance of the sacrament.

He said the second half of the document will emphasize what Catholics should do with this deeper understanding and appreciation of the Eucharist, from more active participation at Mass to participating in devotions such as adoration and renewing their commitment to serve others.

And that is how the drafted document looks. It explains the importance of Communion, calling it a gift, and uses references from Scripture, prayers of the church and Second Vatican Council documents to back this up. It also explains, citing words of the saints, how Communion is not just a symbol but the real presence of Christ.

This transformation of bread and wine into the body and blood of Christ, the document says, is “one of the central mysteries of the Catholic faith” which is a “doorway through which we, like the saints and mystics before us, may enter into a deeper perception” of God’s presence.

The document also notes, almost halfway through, that the Vatican II document “Lumen Gentium” (The Dogmatic Constitution on the Church) describes the Eucharist as “the source and summit of the Christian life.”

It notes that as Catholics understand what the Eucharist means, they should more fully participate in Mass and also reach out to serve those in need, citing the Catechism of the Catholic Church, which says: “The Eucharist commits us to the poor.”

Toward the end, it mentions how Catholics should show reverence in receiving the Eucharist and also recognize that there are some sins that “rupture the communion we share with God and the church.”

It distinguishes between mortal and venial sins — noting that the latter are the “sins and everyday faults” that do not break the covenant with God. “One commits a mortal sin, ” the document says, “by freely, knowingly and willingly choosing to do something that involves grave matter and that is opposed to charity, opposed to love of God and neighbor.”

“One should not celebrate Mass or receive holy Communion in the state of mortal sin without having sought the sacrament of reconciliation and received absolution,” the document reminds Catholics.

Then, repeating what the bishops said in their 2006 document, “Happy Are Those Who Are Called to His Supper,” this draft document points out that if a Catholic in his or her personal life has “knowingly and obstinately” rejected the doctrines of the church or its teaching on moral issues, that person should refrain from receiving Communion because it is “likely to cause scandal for others.”

The document concludes with examples of saints who were transformed by their reception of the Eucharist and their deep understanding of what it means.

The discussion about what this document might say and how it could specifically call out Biden and other Catholic politicians has not just been a topic for the U.S. bishops and Catholics across the country, but it also has involved some conversation from the Vatican.

Prior to the bishops’ initial discussion of this document, Cardinal Luis Ladaria, prefect of the Vatican’s Congregation for the Doctrine of the Faith, urged the bishops in a letter to proceed with caution in developing a national policy “to address the situation of Catholics in public office who support legislation allowing abortion, euthanasia or other moral evils.”

And since then, Pope Francis said on a Sept. 15 flight back from Bratislava, Slovakia, that he preferred not to comment directly on the issue of denying Communion in the United States, but he urged U.S. bishops to take a pastoral approach rather than wade into the political sphere.

And after the pope and Biden met at the Vatican Oct. 29, Biden was asked by reporters in Rome if abortion was one of the topics of their meeting and the president said: “We just talked about the fact he was happy that I was a good Catholic, and I should keep receiving Communion.”

Catholic theologians who spoke to Catholic News Service this summer about the bishops’ document sensed that it would be more about urging Catholics to come to a deeper understanding of this sacrament.

With a lot of emphasis being put on what seemed to be a litmus test about Catholics’ worthiness to receive Communion, Susan Timoney, an associate professor of pastoral studies and a dean at The Catholic University of America, said Catholics should talk to their pastors about this.

She said they will likely come away with a sense that the bishops’ efforts to encourage a deepening appreciation for the Eucharist is an attempt to say, “Look, it means something to be a disciple.”

Timothy O’Malley, director of education at the McGrath Institute for Church Life at the University of Notre Dame, said: “If you pay attention to what the bishops are saying to recent revisions and outlines,” on this document, you don’t see it “being sort of political.”

O’Malley also said the document on the Eucharist and discussion around it should involve looking at the role Catholics have in the public square, noting that when Catholics receive the Eucharist, it means they “belong to the body,” which means they “uphold all dimensions of solidarity.”

The bishops are expected to discuss the draft document during an executive session they have scheduled for the start of their November in-person meeting in Baltimore; usually they hold such a session at the end of their meeting. The public sessions of the meeting are Nov. 16 and 17.

It needs a two-thirds majority vote to pass.

Contributing to this report was Chaz Muth.