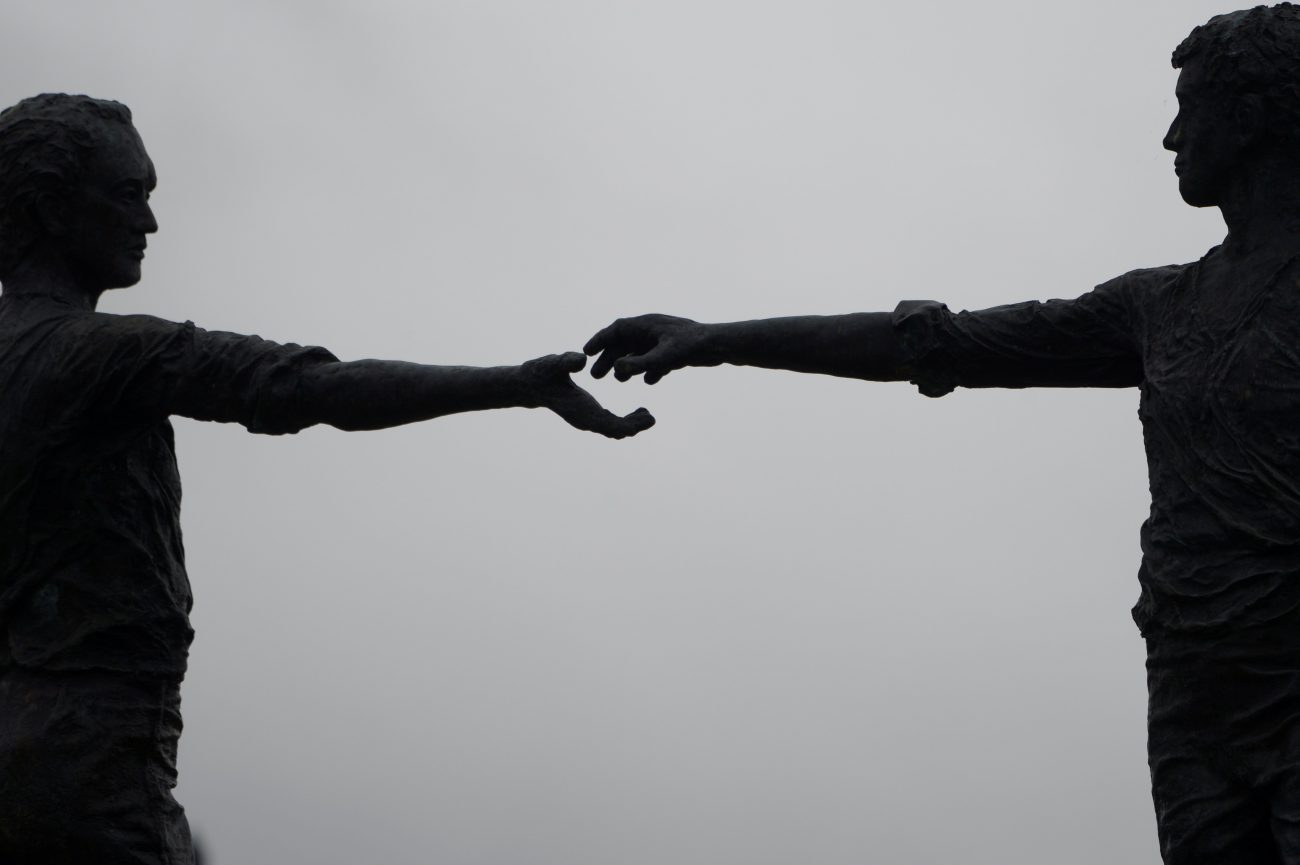 A silhouette of the reace statue, "Hands Across the Divide," is pictured in Londonderry, Northern Ireland, Aug.16, 2017. (CNS photo/Clodagh Kilcoyne, Reuters)

DUBLIN (CNS) — A former director of the U.S. bishops’ Department of Justice, Peace and Human Development told a British and Irish forum what he learned from his participation on the Inter-Church Committee on Northern Ireland: People need to know what they don’t know; resist stereotypes; history matters; be wary of glib analogies; and admit your wrongs.

These lessons, learned over many visits to Northern Ireland with U.S. and Irish church leaders, can be applied to the polarized situation in the U.S. today, said John Carr, co-director of the Initiative on Catholic Social Thought and Public Life at Georgetown University.

Carr was one of several panelists at a virtual seminar, “Religious Peacebuilding Amid Political Polarization: A U.S.-Northern Ireland Dialogue,” hosted by the Las Casas Institute for Social Justice at Oxford University. In his remarks, Carr looked at the current context in the U.S., including political, religious and ethnic violence and the January attack on the Capitol.

Referring to the U.S. attorney general’s warning of a domestic terror threat represented by racially or ethnically motivated extremists and the concerns over police misconduct in the treatment of minority communities, Carr said: “Some of this might sound a little familiar to my friends from Northern Ireland. Maybe it is time for an Inter-Church Committee on Northern Ireland to help us sort through some these issues.”

Carr warned that “democracy itself is under threat” in the U.S. and that the polarization of American political life is “increasingly reflected in ecclesial life.”

Calling for a recommitment to Catholic social teaching and the notion of the common good, he stressed: “We need to build bridges, not walls; we need to engage and persuade, not judge and condemn. We need to be engaged, not used to advance agendas of identity and partisanship.”

Describing American Catholicism as “not where we want to be,” he warned that “our politics shapes our faith instead of the other way around.”

Referring to the “diminished capacity” of the church due to COVID-19 and the clerical abuse scandals, Carr regretted the “crippling clericalism” that resulted in the diversity of the church — women, Latinos, African Americans and young people — not being reflected. In Northern Ireland, “women may not lead the major institutions, but they do most of the important work,” he added.

Stressing that there was “a hunger for the moral vocabulary of Catholic social teaching” he said: “This is a time to rebuild bridges. Peacemaking ought to begin in the church. This is the time to reimagine our role in society as leaven … challenging unjust and destructive divisions.”

Other speakers at the webinar included Maria Power, fellow at Las Casas Institute; the Rev. John Dunlop, former moderator of the Presbyterian Church in Ireland; and Elizabeth Hume, a conflict expert and acting president of the Alliance for Peacebuilding.

Hume worked in Bosnia-Herzegovina for four years for the Organization for Security and Cooperation in Europe and in Kosovo as the chief legal counsel and head of the election commission secretariats. She expressed concern over the “toxic polarization” prevalent in the U.S. at the moment.

In her presentation, Power drew from her research in Northern Ireland, describing political, social, economic and religious relationships as broken and political polarization that remains prevalent 23 years after the Good Friday Agreement.

Polarization was intensified by high levels of socioeconomic deprivation, drug use and mental health issues, leading to people being preyed upon by paramilitary organizations, she said.

“The churches are not innocent in this, and they often contribute to such patterns through their own siloed understanding of their role in society,” Power said.

To overcome this polarization, Power outlined a vision based on the Gospel, Catholic social teaching and dialogue with religious and secular leaders who are working to build a peaceful society.

“We need to go back to realizing that everyone is made in the image and likeness of God. Political and social policy needs to be founded upon the principle of human flourishing. Relationships need to be based upon respect rather than tolerance. Tolerance is just a way of coexisting, while acceptance is a way of living communally.”

Power, an English Catholic, theologian and ethicist, said the alternative narrative to the current polarization in Northern Ireland was a narrative of hope and one of faith-based organizations and churches working to present an alternative vision of politics and society as it should be.

Rev. Dunlop described sectarianism as “a virus” that affects everybody to a greater or lesser degree. Recalling a talk he heard 23 years ago, he said it had provided him with an understanding of the challenges of oppositional identity in Northern Ireland.

Rev. Dunlop, who also was part of the Inter-Church Committee on Northern Ireland, said community identity in Northern Ireland is “shaped and internalized by the real or perceived enemy and the existential political or violent threat to my continued existence or the well-being of my or our community.”

“Political ideology is often focused narrowly on the telling of one part of the story. So, it is important that in the churches, we teach people to listen and learn, because there is more than one story to be told.”

NEXT: Draft statement on Eucharist stresses catechesis not controversy