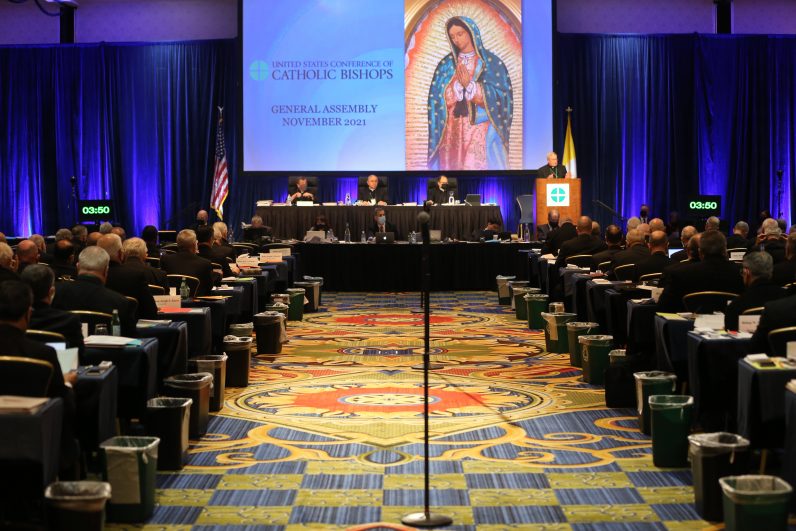 Bishops attend a Nov. 16, 2021, session of the fall general assembly of the U.S. Conference of Catholic Bishops in Baltimore. Due to the COVID-19 pandemic, it is the first in-person bishops’ meeting since 2019. (CNS photo/Bob Roller)

BALTIMORE (CNS) — The U.S. bishops spotlighted two major initiatives focused on the central role of the Eucharist Nov. 17, the second of two days of public sessions of their fall general assembly.

The U.S. Conference of Catholic Bishops approved a 26-page statement, “The Mystery of the Eucharist in the Life of the Church,” with 222 “yes” votes, and also OK’d plans for a three-year National Eucharistic Revival that will culminate with the National Eucharistic Congress 2024 in Indianapolis.

On other matters, they were invited to take a multicultural journey with young Catholics to Chicago next June; were urged to implement a framework for marriage and family ministry that they had approved at their spring assembly in June; agreed to begin review of the “Charter for the Protection of Children and Young People” earlier than planned; and heard how the pandemic may have slowed but not stopped a pro-life initiative called “Walking With Moms in Need.”

(See complete coverage of the fall assembly in our National News section.)

They approved guidelines governing the USCCB’s financial investments that include wider limits on where money would be invested. The guidelines advance a policy of engagement on corporate practices that impact human dignity.

The prelates, meeting in person for a national gathering for the first time since 2019, also approved guidelines for the exposition of the Eucharist and Benediction, affirmed sainthood causes for three U.S. laypeople, approve revisions of statutes for the catechumenate and voted for revised English- and Spanish-language editions of the Order of Christian Initiation of Adults.

The bishops assigned a feast date to St. Teresa of Kolkata — Sept. 5, the death date in 1997 for the founder of the Missionaries of Charity. It will be an optional memorial on the U.S. liturgical calendar. 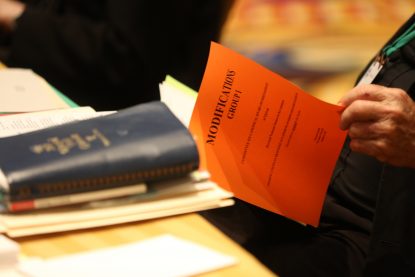 A bishop looks over paperwork Nov. 16, 2021, during a session of the fall general assembly of the U.S. Conference of Catholic Bishops in Baltimore. Due to the COVID-19 pandemic, it is the first in-person bishops’ meeting since 2019. (CNS photo/Bob Roller)

Their vote on the Eucharist statement came a day after their discussion of the document — a discussion that was markedly different than their debate in June about what it could potentially contain, namely a call for President Joe Biden and Catholic politicians who support abortion to be denied Communion.

But the final document had nothing like that and is addressed to all Catholics in the United States.

It “endeavors to explain the centrality of the Eucharist in the life of the church,” said Bishop Kevin C. Rhoades of Fort Wayne-South Bend, Indiana, chairman of the bishops’ doctrine committee, in a short presentation on the statement Nov. 16. It “addresses the fundamental doctrine about the Eucharist that the church needs to retrieve and revive.”

Even bigger than the statement is the plan for the three-year eucharistic revival, ending with the National Eucharistic Congress 2024 in Indianapolis. The bishops approved it 201-17, with five abstentions.

The revival will officially start on the feast of Corpus Christi, June 16, 2022, with a diocesan focus that will include eucharistic processions and other events of adoration and prayer around the country. In 2023, the emphasis will be on parishes and resources aimed at increasing Catholics’ understanding of what the Eucharist really means.

As chairman of the bishops’ Committee on Evangelization and Catechesis, Auxiliary Bishop Andrew H. Cozzens of St. Paul and Minneapolis, who was recently named bishop of Crookston, Minnesota, gave the bishops details about this planned revival just before they voted on it.

The revival could be a time of healing for the entire church, he said, as well as a movement of evangelization and a reawakening of understanding of the sacrament of the Eucharist for Catholics across the country.

Philadelphia Archbishop Nelson J. Pérez invited fellow bishops to a national gathering in Chicago in June to participate with young Catholics in a dialogue about issues of culture, racism and inclusion through the prism of faith.

“Perhaps it was the Holy Spirit’s way of telling us bishops that we really needed to take time to listen to young people, those who minister to them and, especially, those who are in the peripheries, feeling unimportant and unloved, and often alienated from the church,” Archbishop Pérez said Nov. 17. He is chairman of the bishops’ Committee on Cultural Diversity in the Church.

He detailed the opportunity the coronavirus pandemic has provided in facilitating virtual gatherings between young Catholics and bishops over the last year and a half. More than 60 bishops have joined virtual gatherings as part of a process called “Journeying Together,” he said.

The gatherings have taken place online in the midst of a pandemic, under “social unrest, racial reckoning, and the polarization affecting U.S. society,” he said.

The process created “an opportunity for bishops, young adults, youth ministers and campus ministers, and leaders of various other ministries with young people, to engage in respectful yet honest dialogue in matters of faith, culture, racism, inclusion and the issues that affect them as young people,” he explained.

The chairman of the U.S. bishops’ Committee on Laity, Marriage, Family Life and Youth called on his fellow bishops to work “in every way possible” to implement the national pastoral framework for marriage and family ministry that they approved in June.

Archbishop Salvatore J. Cordileone of San Francisco said that addressing marriage and family life is vital in a time when families are under increasing threats from “sweeping ideological currents that destroy and undermine our sexual identity as man and woman and God-given vocations as father and mother, son or daughter.”

Bolstering marriage and family ministry is an appropriate undertaking to start during the “Amoris Laetitia Family Year,” declared by Pope Francis, the archbishop said.

Titled “Called to the Joy of Love: A Pastoral Framework for Marriage and Family Life Ministry,” the document can serve as a practical guidebook to serve couples and families because it offers an adaptable set of principles and strategies for pastoral care, he said.

Archbishop Joseph F. Naumann of Kansas City, Kansas, chairman of the bishops’ Committee on Pro-Life Activities, told his fellow bishops that the Secretariat for Pro-Life Activities’ “Walking with Moms in Need” initiative may have been slowed by the coronavirus pandemic, but it has by no means stopped helping expectant mothers from any walk of life. It was launched March 25, 2020, just as the pandemic began to take hold.

This initiative “has the capacity to take what is often seen as a partisan divide and transform it into pastoral unity, bridging the divide between Catholics who describe themselves using the labels of ‘pro-life’ or ‘social justice,'” he said. “The vision of WWMIN is that a pregnant or parenting mother in need can turn to any local Catholic parish and be connected with the life-affirming assistance and accompaniment that she needs.”

In presentations at end of the Nov. 17 public session:

— Anna Gallagher, executive director of the Catholic Legal Immigration Network, told the bishops 3 million to 11 million people in the U.S. could soon benefit from some type of immigration reform.

— Auxiliary Bishop Mario E. Dorsonville of Washington, chairman of the USCCB’s migration committee, asked his fellow prelates to advocate, pray and walk with immigrants in their respective dioceses.

— From Haiti to Afghanistan, the work of Catholic Relief Services has focused on responding to the impact of climate change, natural disasters such as earthquakes, hunger, meager farm production and developing education for children, reported Bishop Frank J. Caggiano of Bridgeport, Connecticut, president of the CRS board of directors. He gave the presentation with Sean Callahan, CRS president and CEO.

— The synodal process the church is entering into is meant to show that “no one is unimportant in this time of listening,” said Bishop Daniel E. Flores of Brownsville, Texas. The bishop, a member of the USCCB’s Committee on Doctrine and voted its chairman-elect during the assembly, said the process over the next seven months must involve the participation of the whole church “listening together, praying together, discerning together.”

At sunrise Nov. 18 outside the hotel where the bishops held their assembly, Cardinal Joseph W. Tobin of Newark, New Jersey, Boston Cardinal Seán P. O’Malley and six other Catholic prelates joined survivors of sex abuse, some the victims of clergy in an invitation-only walk to pray for an end to the “evil” of abuse and call for a day of prayer for survivors and an end to the abuse.