Archdiocesan shelter gives Brazilian women ‘the strength to go on’ 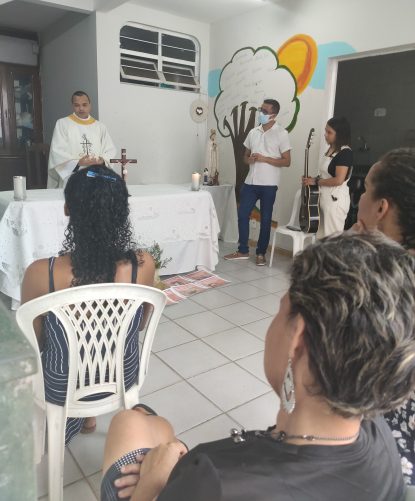 Father Jânio César Barbosa dos Santos celebrates Mass at Our Lady of Mystic Rose Shelter in Montes Claros, Brazil, Nov. 7, 2021. “The creation of the shelter took place during a deep moment of prayer,” said Gregorio Ventura, founder and president of the shelter for women. (CNS photo/courtesy of Archdiocese Montes Claros)

SÃO PAULO (CNS) — When a group of laypeople were discussing homelessness during the 2019 World Day of the Poor, Gregorio Ventura pointed out that although there were a few shelters for men in Montes Claros, there were none just for women.

So he and others who worked with social commissions in the Archdiocese of Montes Claros created the Our Lady of Mystic Rose Shelter for socially vulnerable and homeless women.

“The creation of the shelter took place during a deep moment of prayer. God stirred up strong feelings in my heart for a house that would welcome women,” Ventura, founder and president of the shelter, told Catholic News Service.

With financial support from the Brazilian bishops’ National Solidarity Fund, the shelter houses women for a period of one to two years, rendering psychiatric and psychological support until their lives are restructured and they can care for themselves financially and emotionally.

Ventura said the 12 women currently living in the house come from different walks of life but share a similarity: They all ended up living on the streets.

Beatriz Silva, 32, arrived at the shelter in September.

“By the time I was 12 years old, I had left the orphanage, was doing drugs and went to live on the streets,” she told CNS. “Life on the streets wasn’t easy, so I shacked up with the first man who offered me a roof over my head and a plate of food to eat.”

Still a child herself, Silva had her first child at 13. Between drug partners and going back frequently to live on the streets, she had seven more children.

“I had no way to take care of them, so I gave four of them up for adoption, two died while still young and two are living with my old foster parents,” she said.

Since arriving at the shelter, she said, she has refrained from using drugs and has reconnected with two of her children.

“It had been more than a year that I hadn’t seen my youngest kids, but the people here encouraged a reconnection, and at the beginning of November, I was able to visit them,” Silva said softly over the telephone.

She said the shelter has given her the opportunity to improve her life.

“I had no hope left. If it were not for the grace of God and the people in this shelter, I would not have found the strength to go on,” Silva said. Now she hopes to finish her studies, get a job and eventually have her two youngest children live with her.

“When you are on the streets, you don’t need only clothes or a pair of shoes, you need people who believe in you, people who will give you a hand and help you get back on your feet; people who will allow you to have faith once again,” she said.

A 23-year-old woman who wanted to be identified only as Maria told CNS: “This house has been a refuge for me. … Here I feel safe, I feel I can be my best.”

Maria said she was at a critical point in her life when she heard about the Mystic Rose Shelter. She had dropped out of school and was using drugs.

“Due to my use of heavy drugs, I was no longer welcomed at my relatives’ home and started sleeping on the streets,” she explained.

Now, after seven months at the shelter, Maria is seen by all as a success story. She returned to her studies and will complete her bachelor’s degree in December, has an internship and hopes to open a consulting firm of her own in the near future.

“Without the help of Mystic Rose house, I would have never been able to achieve these things,” she said.

Archbishop João Justino de Medeiros Silva of Montes Claros praised the venture as well as the laity and benefactors that made it happen.

“This project is completely in tune with the Gospel of Jesus Christ. It is a concrete expression of what we do and fits perfectly with the parable of the good Samaritan — “saw, felt compassion and took care,” said the archbishop. 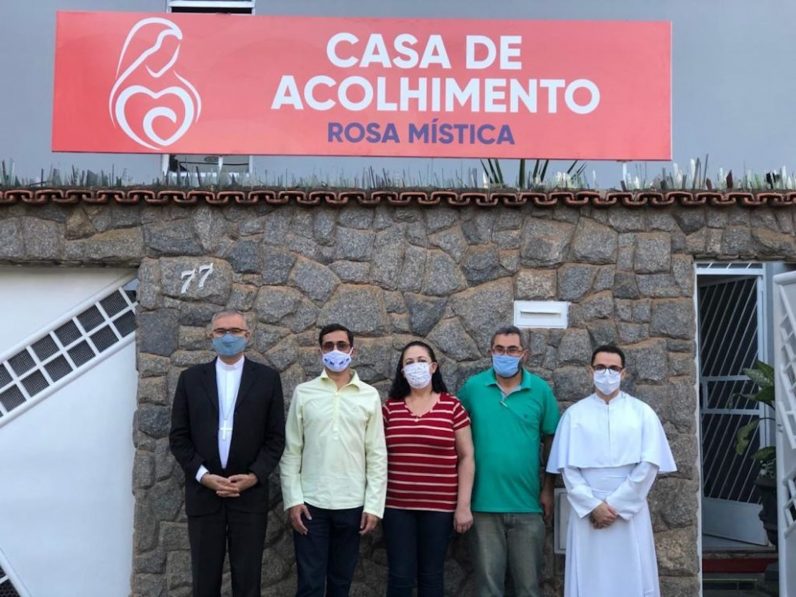 Archbishop João Justino de Medeiros Silva of Montes Claros, Brazil, Father Alessandro Resende Heleno and staff pose for a photo during the opening of Our Lady of Mystic Rose Shelter in Montes Claros Oct. 4, 2020. “The creation of the shelter took place during a deep moment of prayer,” said Gregorio Ventura, founder and president of the shelter for women. (CNS photo/courtesy of Archdiocese Montes Claros)