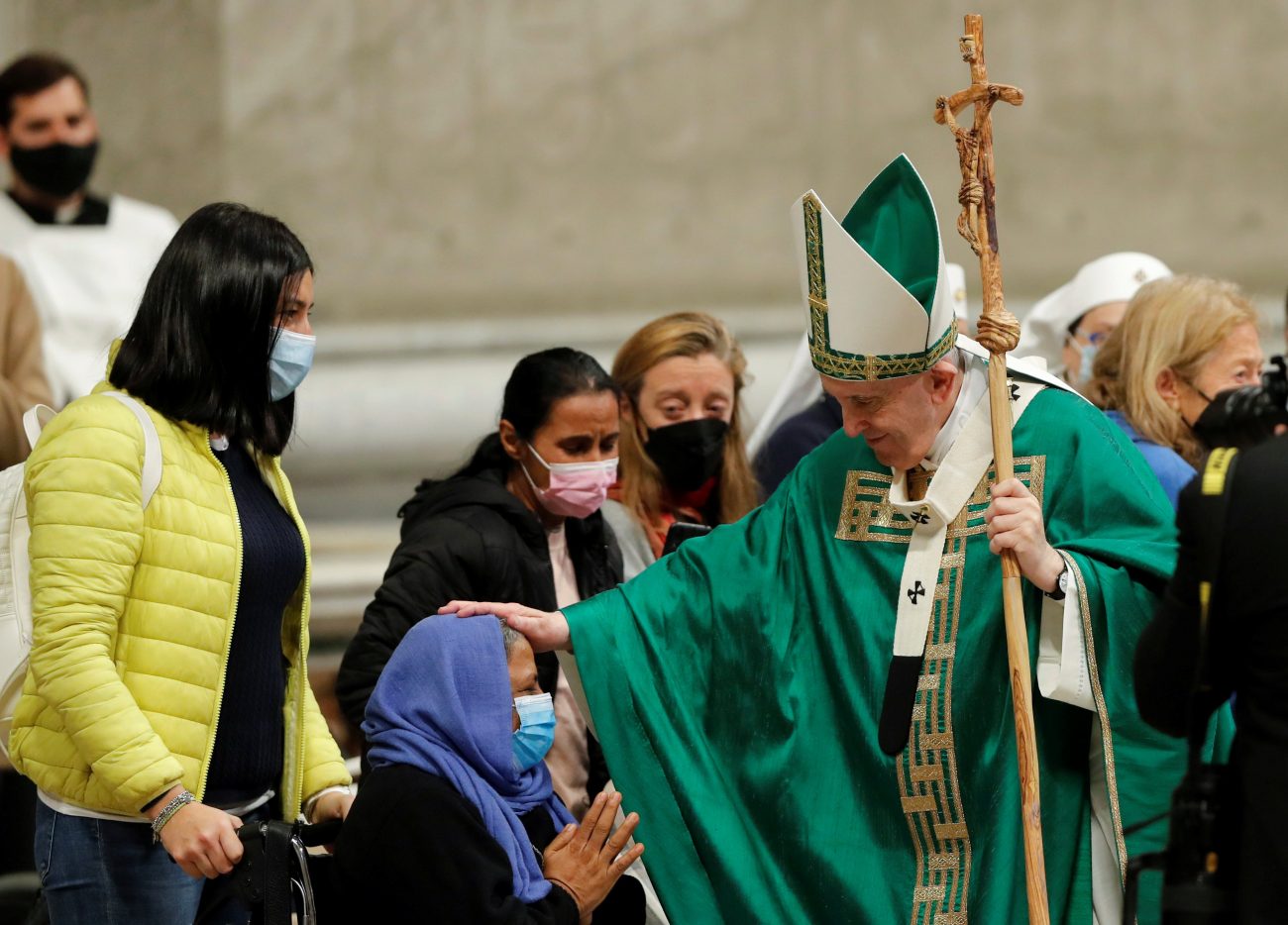 Pope Francis greets a woman as he leaves after celebrating Mass marking World Day of the Poor in St. Peter's Basilica at the Vatican Nov. 14, 2021. (CNS photo/Remo Casilli, Reuters)

VATICAN CITY (CNS) — The gift of hope becomes tangible in people’s lives through concrete actions that seek to relieve the suffering of the poor and console the downtrodden, Pope Francis said.

In his homily at a Mass for the World Day of the Poor Nov. 14, the pope said that true Christian hope is not “the naive, even adolescent optimism of those who hope things may change” but is instead built daily through concrete gestures that manifest “the kingdom of love, justice and fraternity that Jesus inaugurated.”

“We are asked to nurture tomorrow’s hope by healing today’s pain,” he said. “The hope born of the Gospel has nothing to do with a passive expectation that things may be better tomorrow, but with making God’s promise of salvation concrete today. Today and every day.”

The Mass capped a series of events marking the annual world day, including a Nov. 12 pilgrimage to Assisi with hundreds of poor men, women and children from across Europe.

During the meeting, the group shared a video message sent by Pope Francis to mark the occasion. In it, the pope asked the poor for forgiveness “in the name of all Christians who have wounded, ignored or humiliated you.”

In his homily for the Mass in St. Peter’s Basilica, the pope reflected on the Sunday Gospel reading from St. Mark, in which Jesus describes the days of tribulation when “the sun will be darkened, and the moon will not give its light.”

While the grim description may “leave us bewildered,” the pope said Christ also invites his followers to hope in the salvation that is to come.

However, he added, it is also a word of consolation for the poor who are often forced into poverty and are “victims of injustice and the inequality of a throwaway society that hurries past without seeing them and, without scruple, abandons them to their fate.”

“The World Day of the Poor, which we are celebrating, asks us not to turn aside, not to be afraid to take a close look at the suffering of those most vulnerable,” the pope said.

While Christian hope is fundamental, he continued, it must translate into decisions and actions of “concern, justice and solidarity” with the poor and with the environment, through tenderness and compassion.

“It is up to us to overcome the temptation to be concerned only about our own problems; we need to grow tender before the tragedies of our world, to share its pain. Like the tender leaves of a tree, we are called to absorb the pollution all around us and turn it into goodness,” the pope said.

After Mass, the pope greeted pilgrims gathered in St. Peter’s Square for his Sunday Angelus address and reminded them of the need to help the poor who are the presence of Jesus in the world.

NEXT: St. Joseph reminds church to pay attention to the essential, pope says