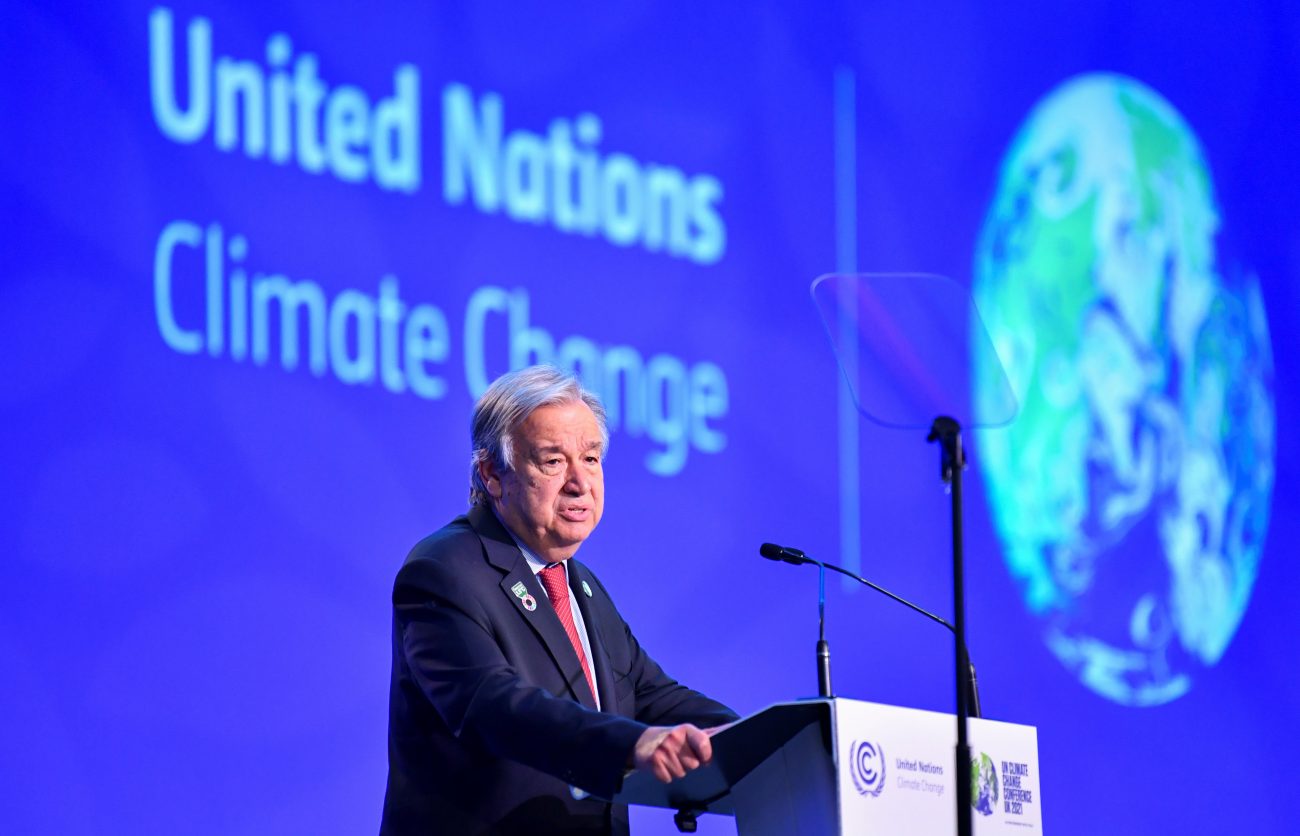 António Guterres, secretary-general of the United Nations, speaks at the U.N. Climate Change Conference in Glasgow, Scotland, Nov. 11, 2021. He called the final deal at the conference "a compromise" on Twitter Nov. 13. "It's an important step, but it's not enough. It's time to go into emergency mode. The climate battle is the fight of our lives & that fight must be won." (CNS photo/Dylan Martinez, Reuters)

VATICAN CITY (CNS) — After two weeks of talks among world leaders at the 26th U.N. Climate Change Conference, there were plenty of terse tweets and editorial hashtags offering varying assessments of the final Glasgow Climate Pact.

Some disappointed commentators on Twitter called #COP26 a #CopOut26 and climate activist Greta Thunberg told BBC Scotland Nov. 15 that while there were some “small steps forward,” the final agreement, on the whole, “succeeded in watering down the ‘blah, blah, blah,’ which is quite an achievement.”

Even António Guterres, secretary-general of the United Nations, called the final deal “a compromise” on Twitter Nov. 13. “It’s an important step, but it’s not enough. It’s time to go into emergency mode. The climate battle is the fight of our lives & that fight must be won.”

Representatives from nearly 200 nations had come together Oct. 31-Nov. 12 with the goal of agreeing to cut global emissions by half by 2030 as part of efforts to limit global warming to 1.5 degrees Celsius. Negotiations also aimed to come up with a plan for funding action in developing countries, particularly in helping them adapt, mitigate and recover from the harm caused by climate change.

Even though Pope Francis did not attend in person as he had hoped, “he was there in spirit,” with his teaching and appeals represented throughout the summit, both at the high-level talks by the Vatican delegation and by the many Catholic organizations and parishes present and active on the sidelines, said Christine Allen, the director of CAFOD, the Catholic international development agency in England and Wales, which had a representative on the Vatican delegation.

“It was a shame” he could not be there because “he is like the biggest celebrity, really,” and with these kinds of events, his presence may have drawn more media attention, she told Catholic News Service Nov. 16.

COP26 was a major disappointment, particularly for CAFOD’s partners who work with poor communities, because it did not deliver the urgent action or justice required, the agency said in a Nov. 13 press release.

Action to limit temperature increases has been pushed to next year and wealthier nations failed to deliver on desperately needed climate finance, it said.

And yet, there was an unprecedented call in the agreement to accelerate the phase-out of inefficient fossil fuel subsidies, the CAFOD statement said, even though there was no clear deadline and vague language left gaping loopholes.

Those most vulnerable to climate change and Indigenous peoples were present at the summit like other years, “but it did feel that their voices were a little bit more center stage than they had been in the past,” she said.

Also, the issue vulnerable communities have been clamoring for, that of creating a needs-based system of compensation for loss and damage from climate change, finally got some attention, Allen said.

In previous years, she said, it was like seeing poor countries “knocking on the window” of these summits, begging for “loss and damage” assistance, “whereas now the issue was very much on the table, people were talking about it and really pushing for it.”

“What I thought was significant this year was, and I think this reflects some things Pope Francis has been calling us to do, is that broader ecological conversion,” she said.

At this summit, she said, the climate crisis, financing and other responses were less likely to be treated as separate problems needing “one or two tweaks.” There was the realization that all these things require “a much more fundamental look at how we live our lives, how we organize our economy, how we do economic business and politics.”

Even though promises and practical action fell short in the final agreement, “we are on a road from which there is no turning back. The level of realization from right across the world that we need to act and act with urgency absolutely took place,” Allen said.

The Vatican Dicastery for Promoting Integral Human Development launched the Laudato Si’ Action Platform Nov. 14, which shows “the church is really coming together,” she said.

This global grassroots movement has communities commit to change the way they live, use resources and treat other people, in the spirit of an integral ecology.

The pope’s 2015 encyclical, “Laudato Si’,” has “cascaded down” through all levels of the church, with so many new initiatives, deepened reflection and increased personal commitment to care for creation, Allen said, and these efforts will continue.

Where leaders at the global summit failed or postponed needed action, the church will continue “to stand alongside people in need through the Caritas network and through others to continue to find ways to respond to people who are directly affected by climate now and today,” she said.

“So, in many respects, COP is a disappointment, but it is a blip on our journey and our journey continues,” she said.

“The challenge for us is we’re not going far enough, fast enough or fair enough,” she said.

Allen said, people should “go back and read Laudato Si’ again, and you will be stunned. It was ahead of its time.”

“It’s calling for that broad conversion: Yes, on recycling, yes, on energy use and flying less, yes, on eating less meat, all of those things that individuals do, they become part of a much bigger tapestry,” she said. “Laudato Si’ helps us see that we are part of that world, and we are part of the solution as much as part of the problem and it is up to us to decide which side we’re on.”