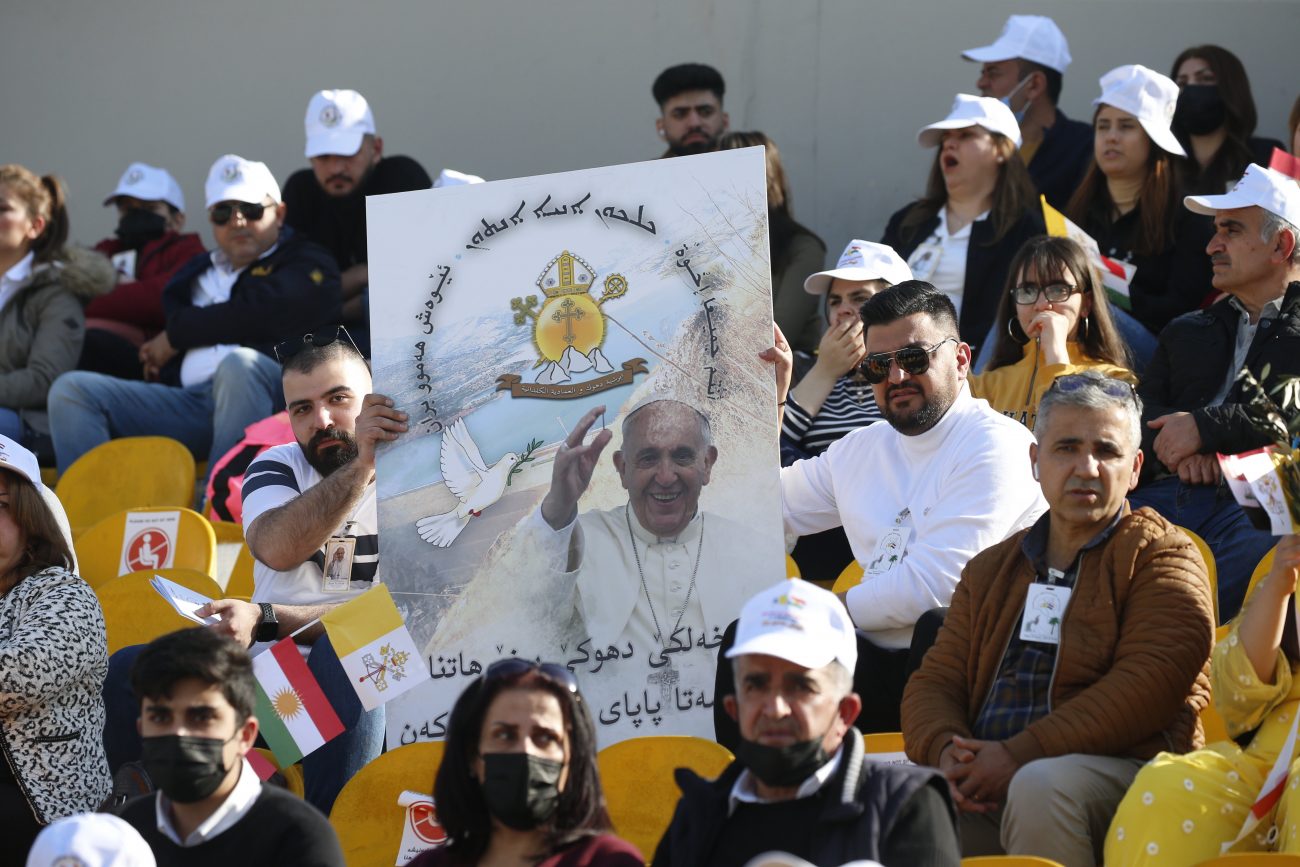 Men display a poster with an image of Pope Francis as the wait for him to celebrate Mass at Franso Hariri Stadium in Irbil, Iraq, March 7, 2021. Although Catholic officials acknowledge the pain many Christian Iraqis still feel, they say Pope Francis' visit earlier this year recharged the community. (CNS photo/Paul Haring)

ANKAWA, Iraq (CNS) — Nahla and Valentina like to stop and pray at Mar Elia Chaldean Catholic Church in the center of this small majority Christian community. The grounds of the church once sheltered several hundred Christians who were forced to flee their homes in 2014 when Islamic State militants attacked Mosul and surrounding villages some 50 miles away.

The tents and caravans that dominated the property are gone, but the women say many Christian families remain unable to return home.

“Although we are from Ankawa, there are still many displaced in our midst from Mosul, Qaraqosh and other towns, but they are now in apartments, having to pay rent and wondering if they will ever be able to go back,” Nahla told the Catholic News Service after lighting a candle near the saint’s statue. 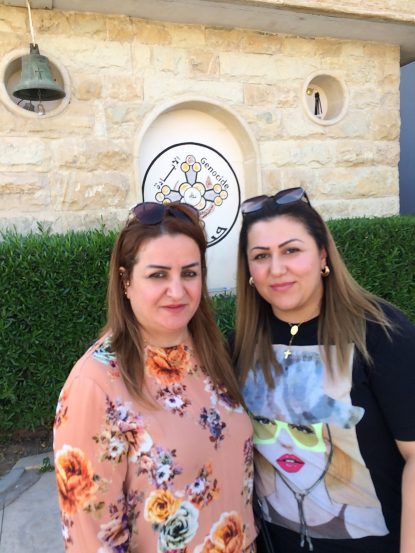 “The pope gave us a lot of hope with his visit in March. It was wonderful to see our churches united in welcoming him and enjoying the many Masses, but in practical ways, we don’t feel much has changed in the circumstances,” she said. “Being separated is so difficult.”

Chaldean Catholic Archbishop Bashar Warda of Irbil and other church officials acknowledge the pain that many still feel, but Archbishop Warda said the papal visit helped to inspire and recharge Iraq, which has struggled to regain a firm footing after years of conflict and sectarian violence.

He and others point to demonstrable, positive developments experienced by Iraqi Christians since Pope Francis’ successful visit, but recognize the challenges that the Christian community still encounters and wants to overcome.

“Pope Francis brought a message of hope, courage and bravery, coming in the middle of the coronavirus to a not very stable country. We cannot expect him to solve all the problems and heal minds, but he reached out in goodwill to those suffering, whether Christians, Yazidis or Muslims,” Archbishop Warda told CNS at St. Joseph’s Cathedral in Ankawa.

“Yes, there are still camps for internally displaced people, but there is life in the areas liberated from the Islamic State. This reality can’t be separated from the story of Iraq. Pope Francis came as a pilgrim and stood with us in solidarity,” Archbishop Warda said.

“There is a lack of trust among the people. We need to understand the deep wounds. But I am a man of hope. We should keep pressing ahead, because it’s the work of Christians and Iraqis to help bring about the needed reconciliation,” he said. 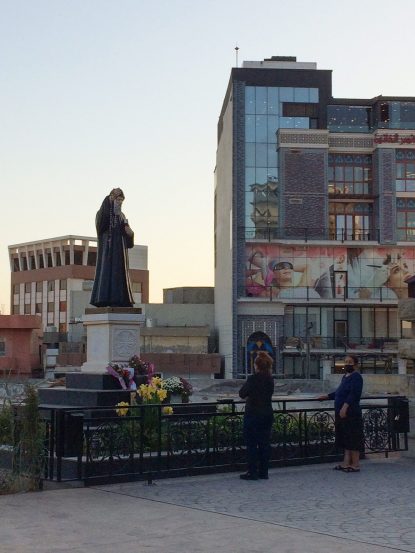 Iraqi Christians pray in front of a statue of St. Elia at the church named for the saint in Ankawa, Iraq, Oct. 25, 2021. Although Catholic officials acknowledge the pain many Christian Iraqis still feel, they say Pope Francis’ visit earlier this year recharged the community. (CNS photo/Dale Gavlak) October 25, 2021

Ankawa, once a Christian enclave of Irbil, the capital of Iraqi Kurdistan, was recognized in October by the governing authority as its own official district. This means that the town’s Christians will now directly elect their own mayor and have responsibility for security and other matters.

Archbishop Warda said he believes the papal visit helped to raise Ankawa’s profile in the eyes of the governing authorities. Prime Minister Masrour Barzani of the Kurdistan Regional Government recently referred to Ankawa as a home for “religious and social coexistence, and a place for peace.”

“Pope Francis’ visit highlighted the historical presence of Christians in Iraq, and Ankawa was at its center, with the papal Mass celebrated at the largest Christian outdoor gathering. Here, we are working to build the future. The culture of coexistence found here should be a model,” Archbishop Warda said. He pointed to four schools, a university and a hospital built in Ankawa under his stewardship; all have provided local people with badly needed employment.

“This demonstrates to people that the church is committed to stay in Iraq, and we hope this is a sign that they, too, can make a commitment themselves to remain,” said Stephen Rasche, who serves as the vice chancellor at the Catholic University in Erbil and counsel to the Chaldean Archdiocese of Irbil.

“There is an effort on behalf of the community to show that there is a future and a hope. It also shows non-Christians that there is a proper place for Christians and the contribution that they make to the community,” he told CNS. “Catholics have historically engaged in education and health care for all people, regardless of their religious background.”

In October, the Catholic University in Erbil celebrated its first graduating class. The university first opened its doors in 2015 in the midst of the Islamic State genocide perpetrated against Iraq’s religious and ethnic minorities.

Christians have existed in Iraq since the time of Christ, but their numbers have dwindled from some 1.5 million before the 2003 U.S.-led invasion. Estimates put the current Christian population between 250,000-500,000.

“Unfortunately, we might be unable to restore Christian demography, but we need to and can restore the Christian role and presence through these educational centers, hospitals and other services. We have started to touch lives, but we need to do more,” said Father Emanuel Youkhana, who runs the Christian Aid Program Northern Iraq, a Christian program for displaced Iraqis around the northern city of Dahuk.

“The papal visit showed that Iraqi Christians are deeply rooted,” said Father Youkhana, a priest, or archimandrite, of the Assyrian Church of the East. “Through his moral influence, the Holy Father gave a clear message to Iraqi politicians and the government: All Iraqis must count.”

“For the past 2,000 years, Christians are an added value for these communities and are giving a lot to Iraq. We are much more needed now because we can be the bridges. This is what we need in Iraq, to bridge the people,” Father Youkhana told CNS.

He said that Pope Francis “did his homework; however, now Iraqi Christians must do theirs” by providing practical programs to uplift Iraqis.

One way, he said, is to “start to have an interchurch platform that is tackling both economics and spiritual life of the people and also to invest in the new generation of open-minded bishops.”

“Ankawa is a great model of young bishops. We are starting to touch lives. … We don’t expect His Holiness to come every year here. He paved the way, and we have to follow,” Father Youkhana said. 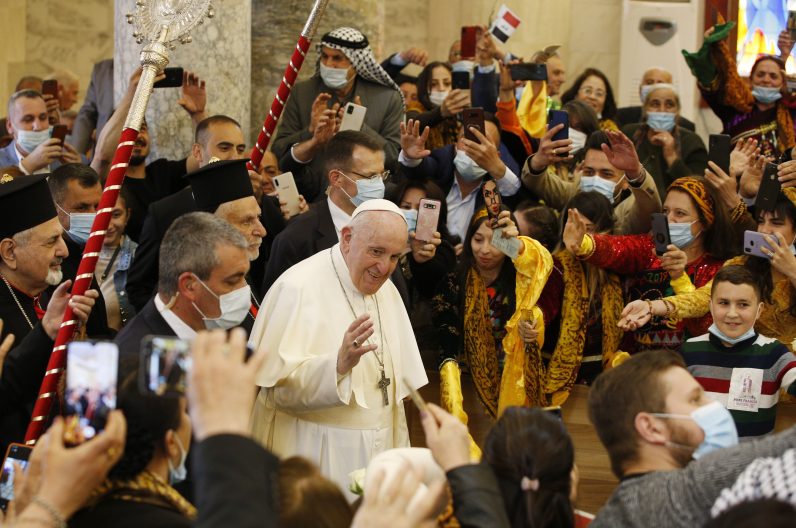 Pope Francis arrives for a visit with the community at the Church of the Immaculate Conception in Qaraqosh, Iraq, March 7, 2021. Although Catholic officials acknowledge the pain many Christian Iraqis still feel, they say Pope Francis’ visit earlier this year recharged the community. (CNS photo/Paul Haring)

NEXT: Climate talks: From hot air to action steps rooted in care