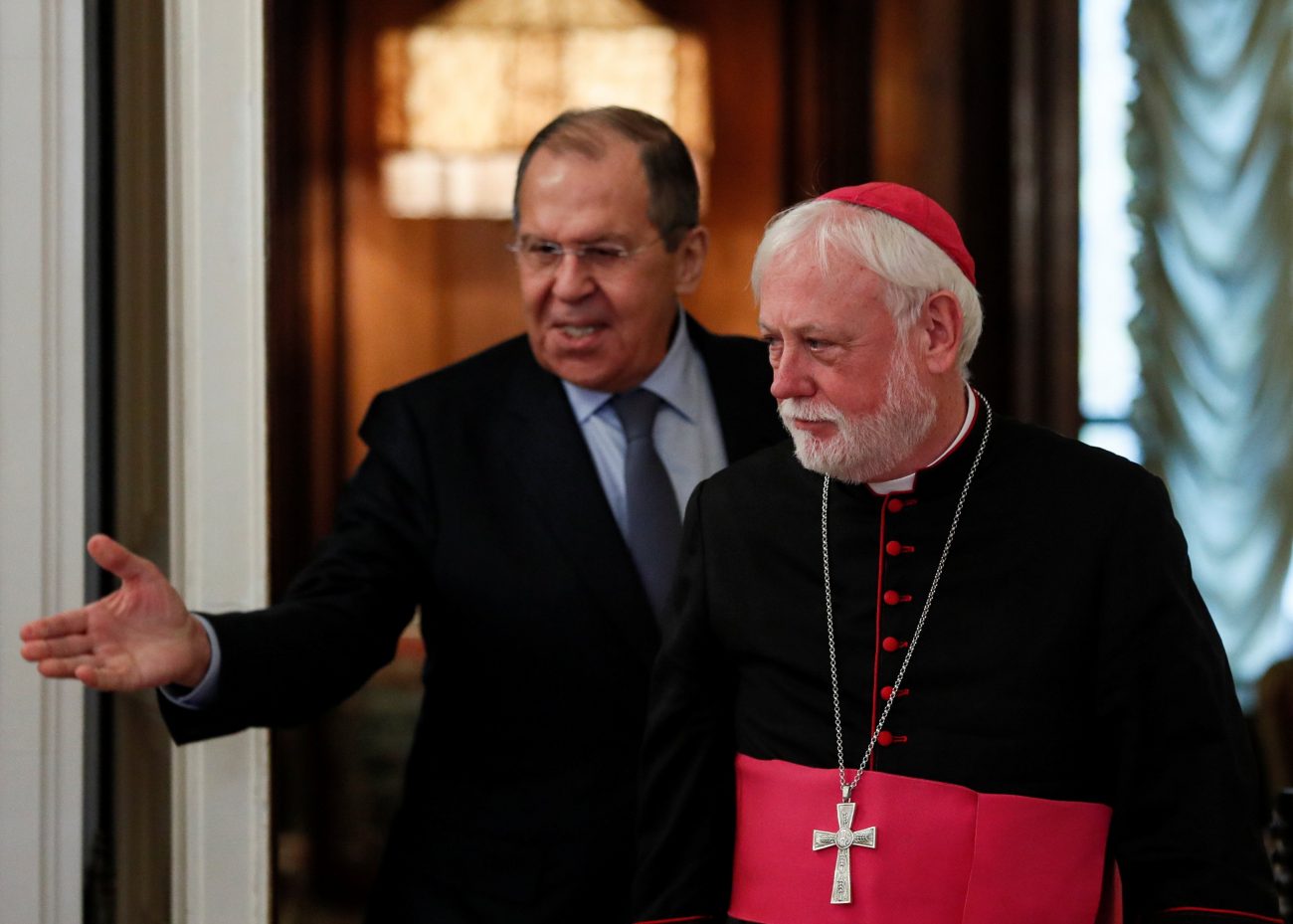 VATICAN CITY (CNS) — During his first visit to Russia, the Vatican foreign minister said relations between the two “have been steadily strengthened,” but added that greater cooperation could benefit the global community.

During a news conference Nov. 9 with Lavrov, Archbishop Gallagher mentioned a 2019 meeting at the Vatican with Russian officials to discuss nuclear disarmament. Then he said his meeting with the Russian officials in November was an opportunity to discuss “the many bilateral topics and international issues of mutual concern for the Holy See and the Russian Federation,” recognizing both accomplishments and “steps that can be taken to give a positive response to the many problems that the world is experiencing today.”

“Given the Holy See’s ongoing concern for conflict situations and its commitment to peace and support for populations in need, I assured the foreign minister of the Holy See’s readiness to support any peace initiatives,” the archbishop said. “The Russian Federation has the capacity to alleviate tensions in conflict situations so that the people who are victims may live in safety and exercise their fundamental human rights.”

Responding to a question, Archbishop Gallagher said that, regarding Syria, the Vatican sees as “vital” the U.N.-mediated discussions to draft a new constitution for the country. “We hope that all parties to that will cooperate so that they can be successful and that, ultimately, there will be a political solution” to bring peace after more than 10 years of war and allow refugees, including many Christians to return home.

Asked about the crisis involving migrants, mainly from the Middle East and Asia, trying to cross from Belarus into Poland and Lithuania, Lavrov told reporters the European Union should have a uniform policy for handling migration flows. He noted that the EU provides financial assistance to Turkey in exchange for the country preventing migrants and refugees from crossing to Greece, “so why not give this assistance to Belarus so people stay there and do not want to cross into the European Union?”

The European Union, NATO and the United States have said Alexander Lukashenko, the embattled leader of Belarus, is pushing the migrants and refugees to the border to provoke a crisis in revenge for sanctions leveled against his government by the European Union after a harsh crackdown on protesters in 2020. Russia is one of Belarus’ few allies.

Regarding “the immediate crisis that is taking place on the borders between Belarus, Lithuania and Poland,” Archbishop Gallagher said the Holy See’s position is consistent with what it says whenever such a crisis arises: Nations must “assume their responsibilities with regard to migrants and to refugees.”

With those trying to cross out of Belarus, he said, nations must respond to “what is obviously a very serious humanitarian crisis. On the church’s part, we know that in Poland, for example, the church has been critical of the approach by the authorities and has been trying to encourage a more humanitarian and a more flexible approach.”

Criticizing the “pushback” of the refugees by Polish military, he said the Polish church is urging people to see the migrants and refugees not as numbers but “as people, just like the rest of us, who find themselves in a very serious position.”

PREVIOUS: ‘History is going to hold us to account,’ says marcher at climate protest

NEXT: Polish church leaders offer support for refugees, but back border security