‘History is going to hold us to account,’ says marcher at climate protest 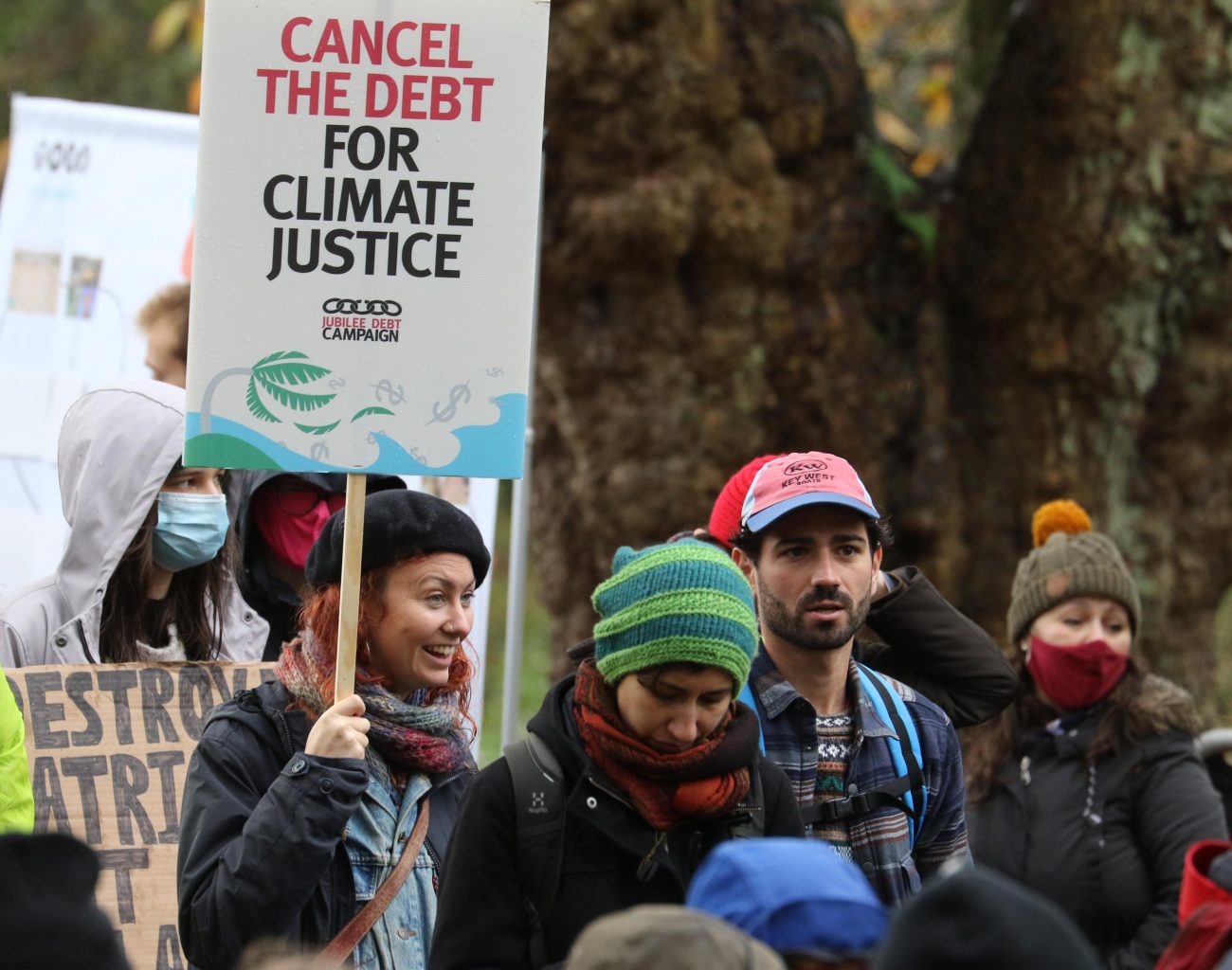 A woman holds a placard during a Day of Action at the U.N. Climate Change Conference in Glasgow, Scotland, Nov. 6, 2021. (CNS photo/Simon Caldwell)

GLASGOW, Scotland (CNS) — Thousands of Catholics took to the streets of the United Kingdom to show their support for action to halt climate change and reverse ecological degradation.

Many joined the Nov. 6 Day of Action in Glasgow, Scotland, the host city of the Oct. 31-Nov. 12 U.N. Climate Change Conference.

They took part in a three-mile march that drew up to 100,000 demonstrators from all over the world. It was the largest of about 100 protests in the U.K. alone and the largest demonstration since the beginning of COP26, as the conference is known.

Many Catholics chanted and carried banners as they marched with such groups as the Scottish Catholic International Aid Fund, and CAFOD, its English and Welsh counterpart. Others came as part of the Laudato Si Movement, which processed in front of a huge inflatable globe, or with Jesuit Missions or in parish or school groups.

They braved five hours of strong winds and driving rain to gather in Kelvingrove Park in the west of the city and walk to drum beats with thousands of other Christians through the city center to Glasgow Green in the east.

CAFOD member Emily Murray, 20, from Reading, England, said visible action was essential because she believed the poor of the world were “already being oppressed by climate change.”

“I think people need to start acting while they still have time,” she told Catholic News Service. “We need to slash emissions by half.

“More than ever young people are really interested in climate change. If we leave it to the government, if we leave it to policymakers, they are not going to get it right … history is going to hold us to account.”

Ayaat Hassan, 17, attended the event with a large party from Notre Dame High School in Glasgow.

“As the youth of today, we are the ones who are going to be most affected by climate change, and we deserve to get heard,” she said. “The politicians are not listening to what we have to say. It is very important for us to come out so they are forced to listen.”

Colm Fahy was one of 28 young adults to walk 52 miles from Edinburgh to Glasgow with Jesuit Missions on the “Growing Our Future” pilgrimage ahead of the conference. He said he hoped real change would come from COP26.

“Pilgrimages go to miraculous things, if we think about Lourdes and Guadalupe,” he told CNS. “We think something remarkable could happen.”

“I am very encouraged by what we call civil society, all the people who are here making their voices heard and who appreciate the importance of this, that we have to do something now,” he said.

“For us, it’s an emergency,” he said. “We need to care. We need to love our planet again, and we need to be loving those who are suffering the effects of climate change, especially.

“It’s the cry of the earth and the cry of the poor that we are committed to. It is hurting those who are poor the most. I hope this will be a turning point. I would be very proud if it was, but I am still praying for a miracle.”

The first week of COP26, which brought together leaders of 196 nations, saw promises to reduce deforestation, methane emissions and burning coal in an attempt to limit global warming following warnings that if global temperatures rise over 1.5 degrees, significant climate events such as floods, droughts and rising sea levels will follow.

Alistair Dutton, chief executive of SCIAF, said the progress of the first week of the summit left him feeling “pretty optimistic.”

“The analysis of all the processes and pledges so far has us down at 1.8 degrees,” he said. “Now we clearly need to do more. We have got to hit 1.5 degrees, but we have closed the gap enormously in just one week.

“That’s a massive turning point,” he continued. “This COP has switched the dial in terms of ambition.”

In spite of the pledges, no consensus has yet been agreed that could meet the U.N.’s main objectives to reduce global warming.

The second week of the summit was expected to raise additional challenges of how to finance the efforts of developing countries to meet the challenges of climate change, including protecting themselves from its most harmful impacts.

NEXT: Closer Vatican-Russia ties could benefit the world, prelate says