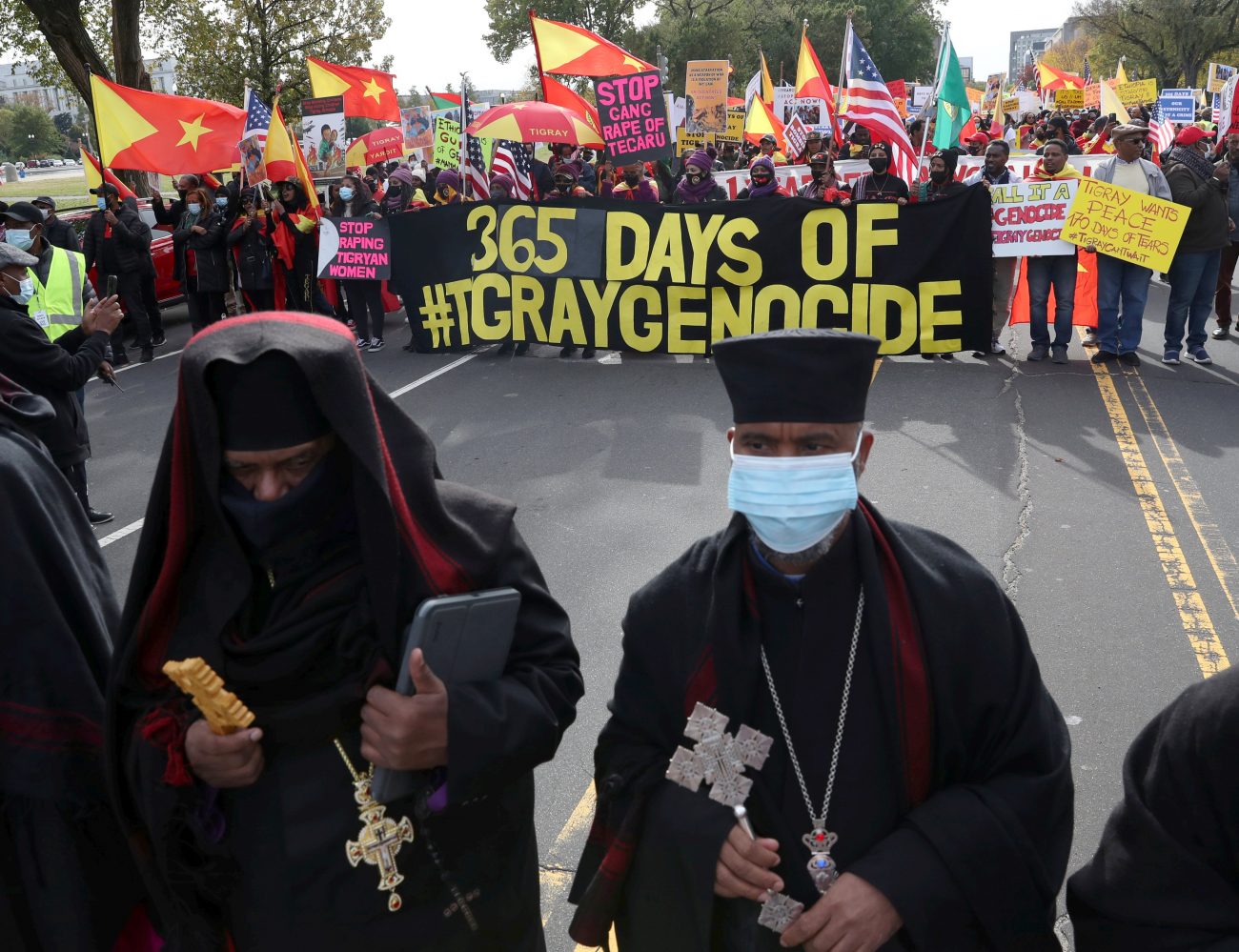 Religious leaders march in Washington Nov. 4, 2021, in protest of the civilian casualties and abuses caused as a result of a yearlong war in Ethiopia's Tigray region. The U.N. reported Nov. 16 that at least 1,000 people were believed to have been detained by police in the Ethiopian capital, Addis Ababa, in the previous seven days. (CNS photo/Leah Millis, Reuters)

NAIROBI, Kenya (CNS) — Amid reports of mass arrests of Tigrayans in Ethiopia, a church source said fear has gripped those residing in the neighboring countries who fear they could be the next targets.

The U.N. reported Nov. 16 that at least 1,000 people were believed to have been detained by police in the Ethiopian capital, Addis Ababa, in the previous seven days. More Tigrayans have been reported arrested in Gondar and Bahir Dar on suspicion that they were affiliated with or supporting the Tigray People’s Liberation Front.

“We have received information that those arrested are being kept in camps where the conditions are extremely bad. We have also heard that every night some disappear and are not seen again,” said an Ethiopian church source who could not be named for fear of his safety.

At the same time, the source said Ethiopian authorities had made public their intention to crack down on Tigrayans in neighboring countries, “for providing wrong information about the conflict.”

“They said reports going out are using the help of Tigrayans” in other countries, the source said. “I think I can’t and I won’t go back to Ethiopia unless things change. I have been told it’s too unsafe for me.”

The Ethiopian conflict started a year ago after Prime Minister Abiy Ahmed Ali launched strikes against TPLF for allegedly attacking a national army base in Mekele, the Tigray state capital.

On Nov. 2, the Ethiopian government declared a six-month state of emergency with broad provisions, including allowing erection of roadblocks, imposition of curfews and military takeovers. The government later appealed to citizens to arm themselves against the advancing Tigray rebels.

“We are concerned about the deafening silence of the faith groups at the face of arbitrary arrests and imprisonment on ethnic bases,” said the source. He added people believe Tigrayans are being held in Ethiopia as prisoners of war, as bargaining chips or to slowly kill them slowly to weaken support.

Eliz Throsell, spokeswoman for the U.N. human rights commission, said, “Many of those arrested have not been informed of the reasons for their detention, nor have they been brought before a court of law.”

Between July and August, 29 bodies were found in Sudan on the bank of a river flowing from Ethiopia. According to reports, the bodies had been identified as belonging to ethnic Tigrayans.