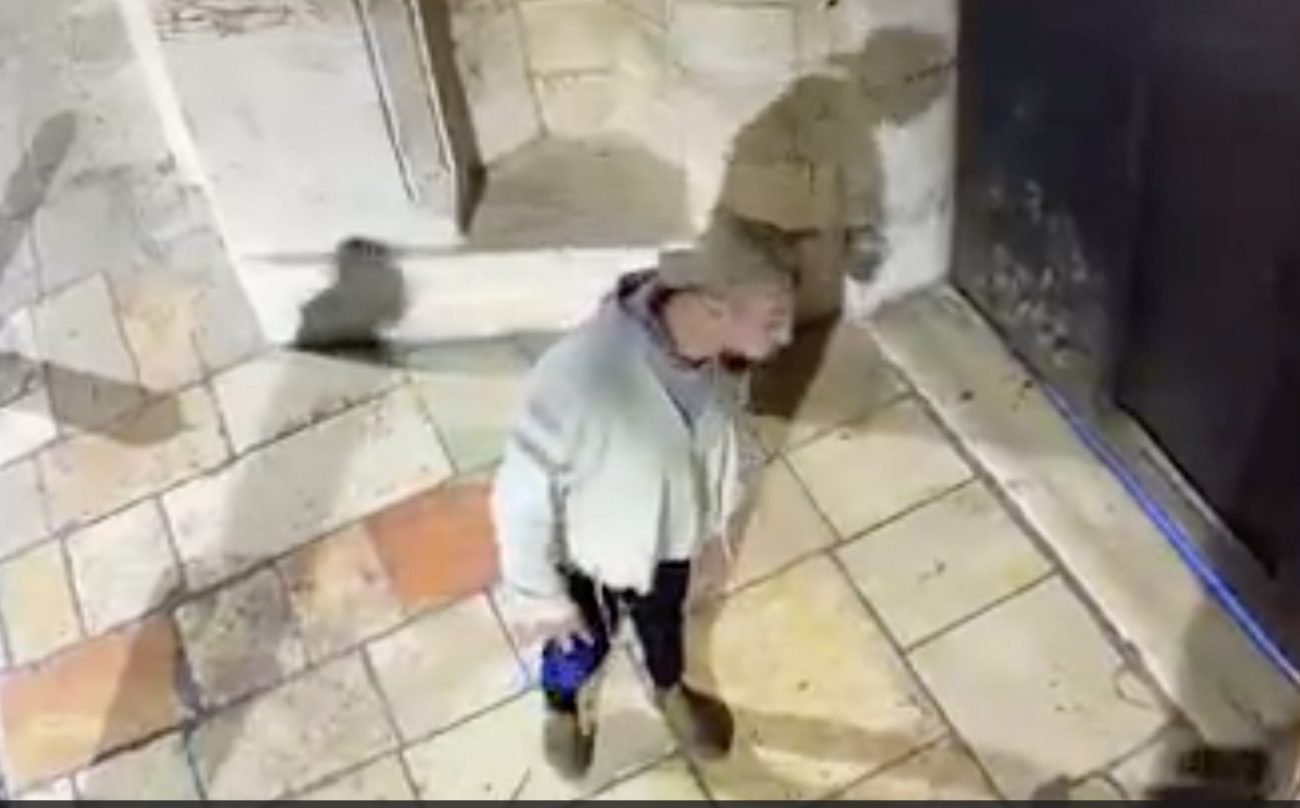 This still image taken from security camera video shows a man who spat several times and waved his middle finger outside the Armenian monastery in Jerusalem. The video was posted to Facebook Nov. 14, 2021 by Yisca Harani. The Armenian Orthodox Patriarchate of Jerusalem has urged Israeli police to thoroughly investigate the incident. (CNS photo/screen capture Facebook)

JERUSALEM (CNS) — The Armenian Orthodox Patriarchate of Jerusalem urged Israeli police to “seriously investigate” a Nov. 15 incident in which a young Orthodox Jewish man spit several times at the entrance of the patriarchate, then angrily gestured with his middle finger toward a surveillance camera.

“Unfortunately, similar insulting acts, which are an expression of racism and anti-Christian hate, have been taking place frequently, especially by religious Jews against Christian clergymen at the Old City, mainly but not only at the Armenian Quarter,” the patriarchate said in a statement sent to journalists Nov. 17. “We urge the police to seriously investigate these insulting acts and bring those who committed them to justice.”

The video image shows the man, who is wearing a backward baseball cap and walking a dog, and is accompanied by another religious man wearing a dark sweater, purposefully walk up to the front gate of the patriarchate and spit twice, then make deliberate eye contact with the surveillance camera and spit three additional times with more emphasis.

Then he faces the camera again, gestures with the middle finger of one hand and puts the finger of the other hand over it to form the sign of a cross, in what the patriarchate said was “a clear act of insult.”

Armenian clergy are often the targets of such spitting attacks as religious Jews use a main road of the Armenian Quarter of the Old City as a passageway to the Western Wall and the Jewish Quarter rather than walk through the crowded market streets of the Muslim Quarter.

“We use this opportunity to assure our readiness to cooperate with religious and civilian authorities for endorsing coexistence based on mutual respect to all people,  regardless of differences in religions, ethnicities and nationalities,” the patriarchate said.

NEXT: With new COVID rules, New Zealand Catholics to have Masses for unvaccinated