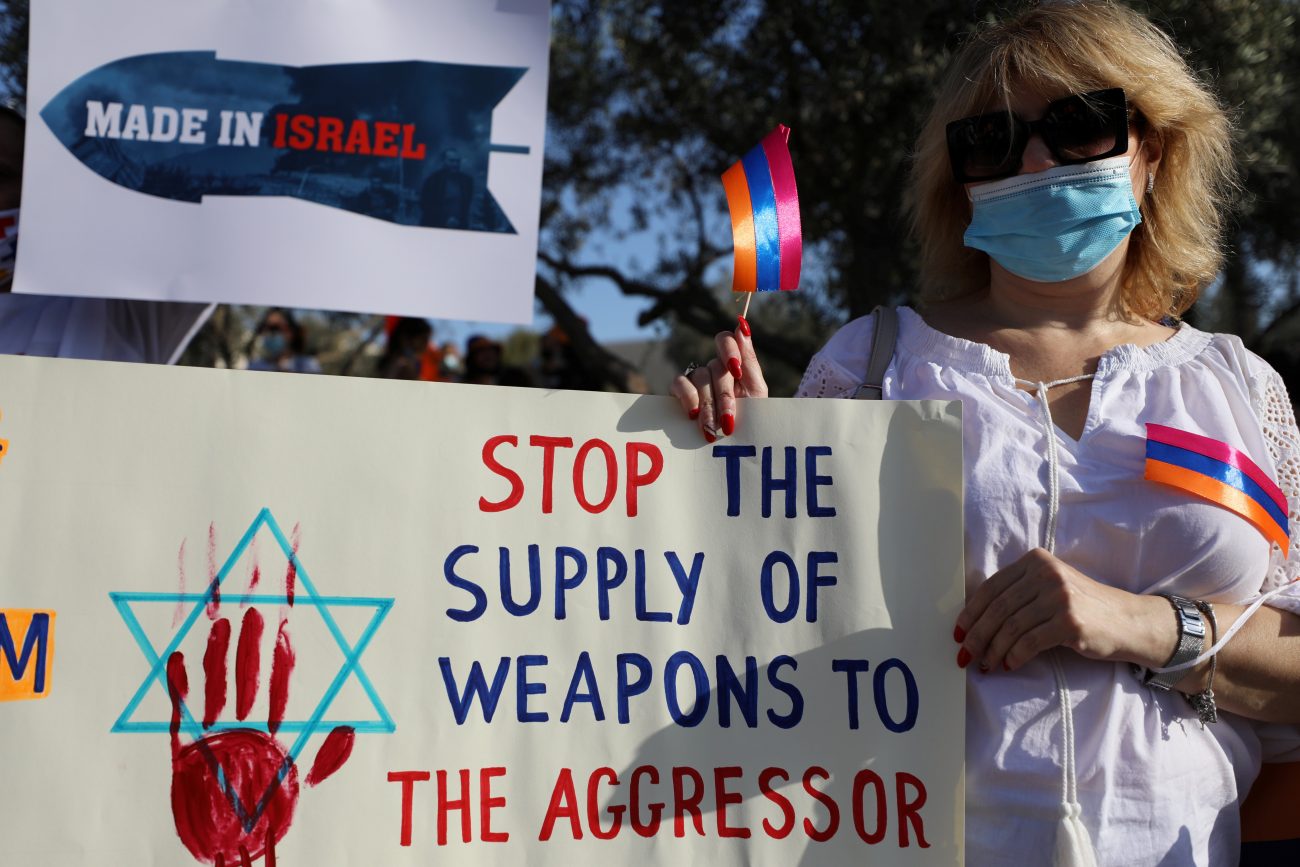 A woman holds a sign during a protest against Israeli arms sales to Azerbaijan, outside Israel's foreign ministry in Jerusalem Oct. 22, 2020. In a written message to the Paris Peace Forum, taking place Nov. 11-13, Pope Francis criticized the strategy of deterrence through stockpiling weapons and including arms sales as part of the global market. (CNS photo/Ammar Awad, Reuters)

VATICAN CITY (CNS) — Criticizing the “abused idea” of deterrence through the stockpiling of weapons, Pope Francis called for integral disarmament worldwide in his message sent to the Paris Peace Forum.

The concept of deterrence, which aims to use limited force or the threat of force in order to deter or dissuade an actor from taking a certain course of action, “does not guarantee the construction and maintenance of peace,” Pope Francis said.

“The idea of deterrence, in fact, has turned out to be false in many cases, leading to far-reaching humanitarian tragedies,” he said in a written message addressed to those attending the forum, both online and on-site Nov. 11-13. The Vatican released a copy of the message Nov. 11.

The annual forum invites hundreds of speakers from around the world to discuss solutions to challenges and promote collective action.

In his message, the pope repeated his call that the post-pandemic world avoid “going back to normal,” when the norm has been severe economic disparity and inequality, “nearsighted” exploitation of natural resources and wasteful consumerism.

“Returning to normal would also mean returning to old social structures inspired by self-sufficiency, nationalism, protectionism, individualism and isolation and excluding our poorest brothers and sisters,” he wrote.

The world needs “a new way out” of current crises, and that requires everyone to work together and to remember that the decisions made today will determine “the direction of future generations,” said the pope’s message.

The first and most urgent issue needing action is “a concrete collective commitment fostering integral disarmament” in order for there to be peace, he said.

Military spending worldwide has well outpaced the amount reached at the end of the Cold War, the pope said, and this spending is steadily increasing each year.

Leaders and governments, in fact, “justify such rearmament based on an abused idea of deterrence founded on the balance between weapons supplies,” which means nations tend to promote their own interests through the use or threat of force, he wrote.

He wrote that the “logic of deterrence” has also become part of the “free market in which armaments are treated like any other manufactured product and, as such, traded freely on a global level.”

“It is therefore not by chance that, for years, we have uncritically witnessed the expansion of the arms market on the global level,” he added.

The pope said he hoped that Christian tradition, Catholic social teaching and the teachings of other religious traditions could help the work of the forum, especially by inspiring hope “that injustice and violence are not inevitable, they are not our destiny.”