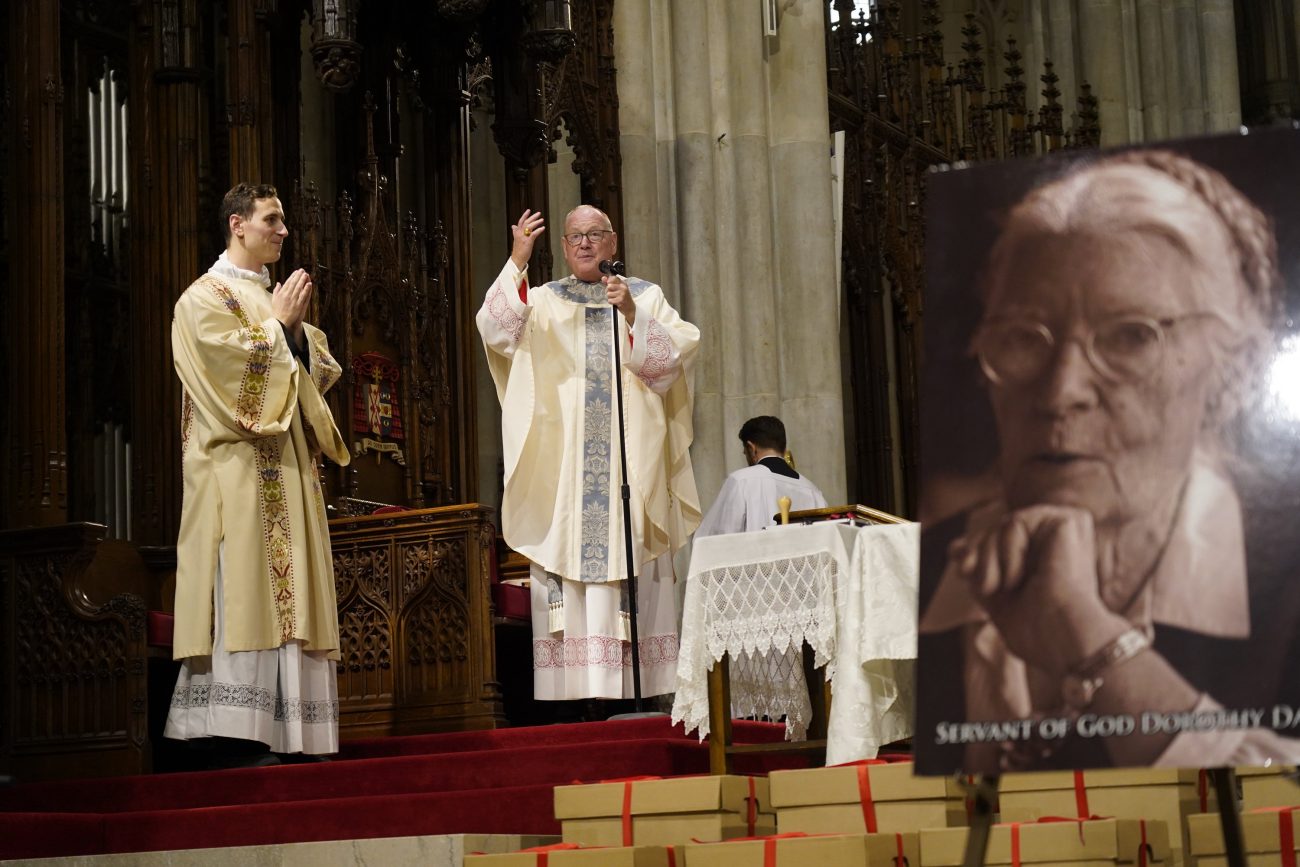 NEW YORK (CNS) — More than 1,500 people filled St. Patrick’s Cathedral Dec. 8 to witness the formal end of the diocesan phase of the sainthood cause for Dorothy Day.

Cardinal Dolan closed the diocesan inquiry with a decree. He and other officials of the inquiry took an oath attesting to its integrity and promised to safeguard the confidential testimony of those they interviewed in the process.

In response, the congregation offered cheers and a standing ovation.

Dorothy Day was born in Brooklyn in 1897. She worked as a journalist for several Socialist newspapers and was an activist deeply interested in the plight of farmers and workers. She was received into the Catholic Church in 1927.

In his homily, Cardinal Dolan said Day was dismayed at the lack of visible Catholic advocacy or witness when she covered a hunger march in Washington in 1932. 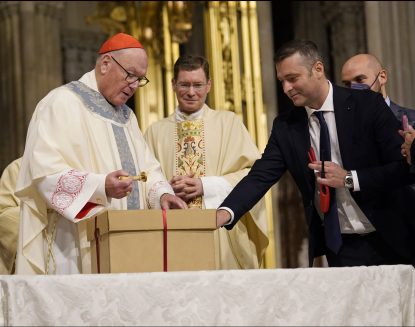 New York Cardinal Timothy M. Dolan stamps a wax seal on an archival box containing documents during a Mass marking the conclusion of the Archdiocese of New York’s investigation of Dorothy Day’s candidacy for sainthood Dec. 8, 2021, at St. Patrick’s Cathedral in New York City. Looking on are Father Brian A. Graebe, episcopal delegate for the canonization cause; Waldery Hilgeman, the Roman postulator for the cause; and Emanuele Spedicator, an associate of Hilgeman. The documents, which detail Day’s holy and heroic virtues, will be reviewed by the Vatican Congregation for Saints’ Causes. (CNS photo/Gregory A. Shemitz)

When she returned to New York, she met Peter Maurin, an itinerant French worker and scholar whom Cardinal Dolan described as “one of the most eccentric people you’d ever want to meet.” Maurin was steeped in Catholic social teaching, and he and Day developed a vision of a society constructed on Gospel values.

Day and Maurin founded The Catholic Worker newspaper, “houses of hospitality” for the indigent and ultimately a lay movement dedicated to the daily practice of the works of mercy, the embrace of nonviolence, prayer and life in community and voluntary poverty.

Day was a daily communicant who practiced social justice, pacifism and charity. She was arrested multiple times for protesting in support of striking workers and against wars. She died in 1980 at a Catholic Worker house in New York City.

George Horton, one of the vice postulators of Day’s cause for sainthood, told Catholic News Service that Cardinal John J. O’Connor of New York asked him in the late 1990s to convene a group of people who knew Day to examine if she should be proposed for sainthood.

“There was unanimous support, but also concerns about the cost and how the church would picture her. Dorothy called people to put into action the Sermon on the Mount, to practice charity and justice. She called people to the deepest sense of the Gospel that was not always on the front burner,” he said. 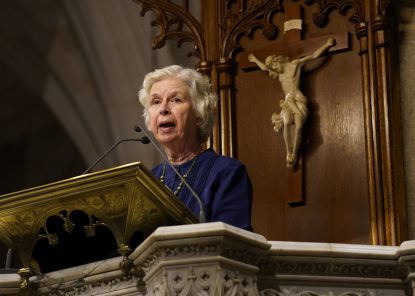 Kathleen Jordan proclaims the first reading during a Mass marking the conclusion of the Archdiocese of New York’s investigation of Dorothy Day’s candidacy for sainthood Dec. 8, 2021, at St. Patrick’s Cathedral in New York City. Jordan was a longtime friend of Day and worked with her as an editor at The Catholic Worker newspaper. (CNS photo/Gregory A. Shemitz)

Horton said Day’s pacifism was seen as a threat by some people and there was concern that an abortion she obtained in the 1920s would be singled out as a defining issue.

“Dorothy was loved by the people who knew her and they did not want her legacy to be diluted,” Horton said.

Cardinal O’Connor initiated the canonization process in 2002 and Day was given the title “Servant of God.” The Dorothy Day Guild was established in 2005 to support the cause and receive information about “graces and favors” received through her intercession. The sainthood process was reinvigorated in 2014.

Cardinal Dolan said Day’s cause got a huge boost when Pope Francis visited the U.S. in 2015 and identified her as an important representative of the American people.

The cardinal said that while “jammed in the back seat of the pope’s little Fiat” after a prayer service at St. Patrick’s, he asked the pope to consider declaring Day “Venerable” at a public Mass the following day. The pope agreed to look into it.

Cardinal Dolan said he was embarrassed at breakfast the next morning when Pope Francis told him he could not make the declaration because the diocesan phase of the inquiry in her cause was not complete.

Horton and Jeffrey Korgen, the cause coordinator, said the road to sainthood is a complex legal process. Horton said the Congregation for Saints’ Causes provides detailed canonical instruction and several books have been written to interpret them.

Korgen said some of the rules are unwritten and Waldery Hilgeman, a canon lawyer in Rome who is the postulator of the Day cause, provided critical assistance. Horton said Hilgeman made annual visits to New York and conducted Zoom meetings to review progress and provide guidance.

The process entails collecting public and private written works and interviewing people who knew the candidate. Theological censors review the documents and weigh in on their consistency with Catholic doctrine, Korgen said.

Once the documents are received in Rome, they will be studied. Then would come the next step in the canonization process — a declaration of Day’s heroic virtues, after which the church would give her the title “Venerable.” Next would come beatification, after which she would be called “Blessed.” The third step is canonization.

In general, a miracle verified to have occurred through the intercession of the sainthood candidate is needed for beatification and another such miracle is needed for canonization.

Korgen said the record includes Day’s entire FBI file detailing multiple investigations into accusations she was a Communist. She was cleared each time, he said, and the reports generally concluded, “some might consider her a pain, but they still vouched for her and that she was well-intentioned.”

Horton said, “Dorothy Day is a saint for our time. She gives us a center when there is so much division in our country. She was an orthodox Catholic who fed the poor and worked for social justice. She gives us a vision of finding common ground and building community.”

He said it was a special gift for him to work with people who knew Day and were “real sources” for demonstrating her belief that Christ can be found in every person.

There are 50,702 pages of documents in the 17 original sealed boxes on their way to Rome. They weigh almost 700 pounds. And of course, the shipment also includes a copy of each document, per congregational instructions.

NEXT: Light shined on untold number of ‘missing’ migrants