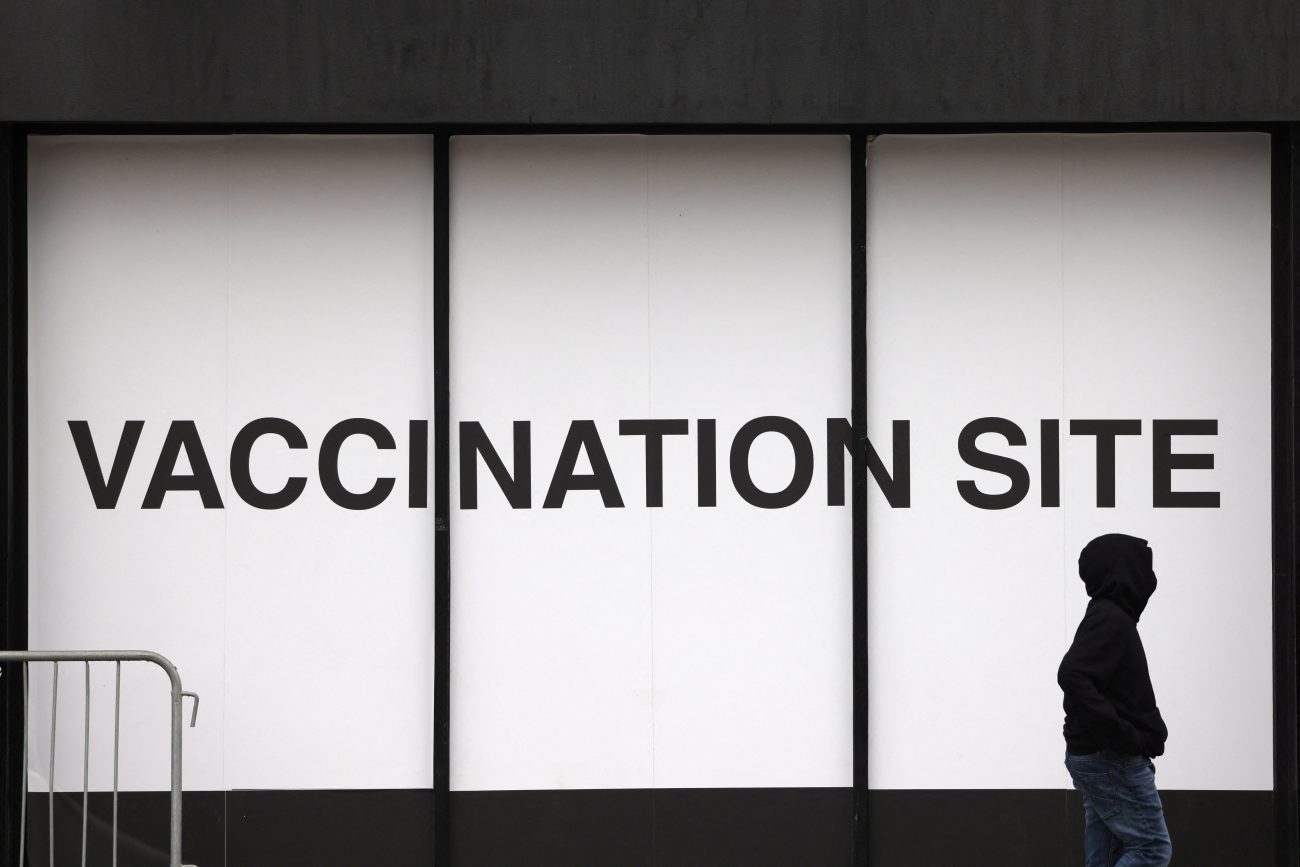 A person walks past a vaccination site in New York City Dec. 18, 2021. The federal Centers for Disease Control and Prevention reported Dec. 20 that the omicron variant is now the dominant version of the coronavirus in the United States. (CNS photo/Andrew Kelly, Reuters)

WASHINGTON (CNS) — The U.S. Supreme Court said late Dec. 22 that it will hear the legal challenges to the Biden administration’s vaccine mandate for businesses with at least 100 employees and health care facilities.

The court scheduled oral arguments for Jan. 7. Until then, the court said, it will postpone any consideration of requests that it stay these mandates.

Business organizations, associations, religious groups and 27 states had called on the high court to stop the administration from mandating a coronavirus vaccine or, in lieu of a vaccine, COVID-19 testing for large employers.

Their objections came after the U.S. Court of Appeals for the 6th Circuit, based in Cincinnati, reinstated the vaccine mandate for employers Dec. 17.

Groups and states against the mandate filed appeals to Justice Brett Kavanaugh, whose jurisdiction covers Ohio. Kavanaugh can ask the Supreme Court to consider these requests.

The three religious groups that filed a joint 179-page brief requesting a stay on the mandate are: American Family Association, a Christian activist organization; Answers in Genesis, a Christian apologetics ministry; and Daystar Television Network, an evangelical Christian network.

The groups said the mandate violated their First Amendment rights because it did not provide religious exemptions or accommodations. They also said it went against their “sacred rights of belief and conscience.”

Kavanaugh asked the Biden administration to respond to the mandate challengers by Dec. 30.

In November, a three-judge panel on the 5th U.S. Circuit Court of Appeals, based in New Orleans, had put a stop to the vaccine mandate developed by the Occupational Safety and Health Administration for large businesses.

In December, amid a growing number of COVID-19 cases with the highly contagious omicron variant, the 6th Circuit heard a consolidated appeal of cases — transferred to it from the 5th Circuit in November. The 6th Circuit then overruled the 5th Circuit’s decision and described COVID-19 vaccines “an important step in curtailing the transmission of a deadly virus that has killed over 800,000 people in the United States.”

OSHA has now said it will begin issuing citations Jan. 10 to companies that do not comply with the mandate.

Kavanaugh, along with Justice Samuel Alito, also received an emergency request from the Biden administration asking it to lift lower court rulings blocking the vaccine mandate for workers at health care facilities that receive Medicare and Medicaid funding. The justices have asked for responses in this case also by Dec. 30.

On Dec. 13, the Supreme Court turned down emergency requests from New York health care workers seeking a religious exemption from the state’s COVID-19 vaccine mandate for its health care employees.

The workers brought their case to the nation’s high court after the U.S. Court of Appeals for the 2nd Circuit refused to stop the vaccine mandate in the fall. The groups said the “punitive treatment of religious objectors” violates the free exercise clause of the Constitution.

The Supreme Court has turned away other challenges seeking emergency relief from COVID-19 vaccine mandates including a challenge by students from Indiana University and from public school employees in New York City. Both of these mandates had religious exemptions.

After the court scheduled oral arguments Jan. 7 in challenges to the administration’s vaccine mandates, White House press secretary Jen Psaki said in a statement: “We are confident in the legal authority for both policies” and the Justice Department “will vigorously defend both at the Supreme Court.”

Opponents of the mandates said only Congress has the authority to put the requirements in place.