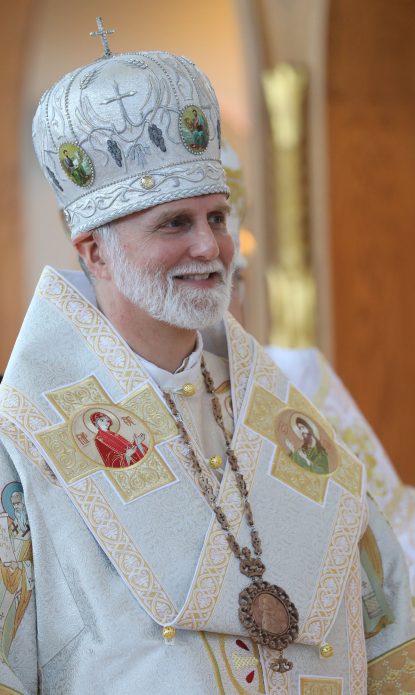 Archbishop Borys Gudziak , head of the Ukrainian Catholic Archeparchy of Philadelphia, smiles during his enthronement June 4, 2019. Pope Francis named Archbishop Gudziak as one of five new members of the Vatican Dicastery for Communication. (CNS photo/Bob Roller)

Archbishop Gudziak, 61, was born in Syracuse, New York, the son of immigrant parents from Ukraine. He is a graduate of the University of Syracuse and holds a doctorate in Slavic and cultural history from Harvard.

He spent two decades in Ukraine, where he directed the Lviv Theological Academy, and he later headed the Paris-based Ukrainian Catholic Eparchy of St. Volodymyr the Great, which covers France, Belgium, Netherlands, Luxembourg and Switzerland.

The other new members, who are all appointed by the pope for a five-year term, include:

— Italian Cardinal Mauro Gambetti, archpriest of St. Peter’s Basilica. The 56-year-old Conventual Franciscan has degrees in mechanical engineering, theology and theological anthropology. He has worked in the pastoral care of young people and vocational programs and served as general minister and custos of the Sacred Convent of St. Francis of Assisi.

— Argentine Archbishop Jorge Eduardo Lozano of San Juan de Cuyo, 66. He is secretary general of the Latin American bishops’ council, or CELAM. He went to vocational school as an electrical technician, studied theology and was ordained a priest of Buenos Aires. He was ordained a bishop by then-Archbishop Jorge Mario Bergoglio — the future Pope Francis. He has headed different pastoral departments in CELAM and was in charge of the press office during the general conference of the bishops of Latin America and the Caribbean in Aparecida, Brazil, in 2007.

— Nigerian Bishop Emmanuel Adetoyese Badejo, 60, of Oyo. With a degree in communication sciences from the Pontifical Salesian University in Rome, he spent many years working as a communications director at the diocesan level and for the Catholic secretariat of Nigeria. He founded and served as the first national chaplain of the Catholic Artists and Entertainers Association of Nigeria, CAEAN.

— Xavière Missionary Sister Nathalie Becquart, 52, undersecretary of the Synod of Bishops. She studied business in France and worked for two years as a consultant in marketing and communications. She is a former director of youth evangelization and vocations for the French bishops’ conference and was named a consultant to the Synod of Bishops in 2019.

NEXT: Vatican announces pope will bring migrants from Cyprus to Italy