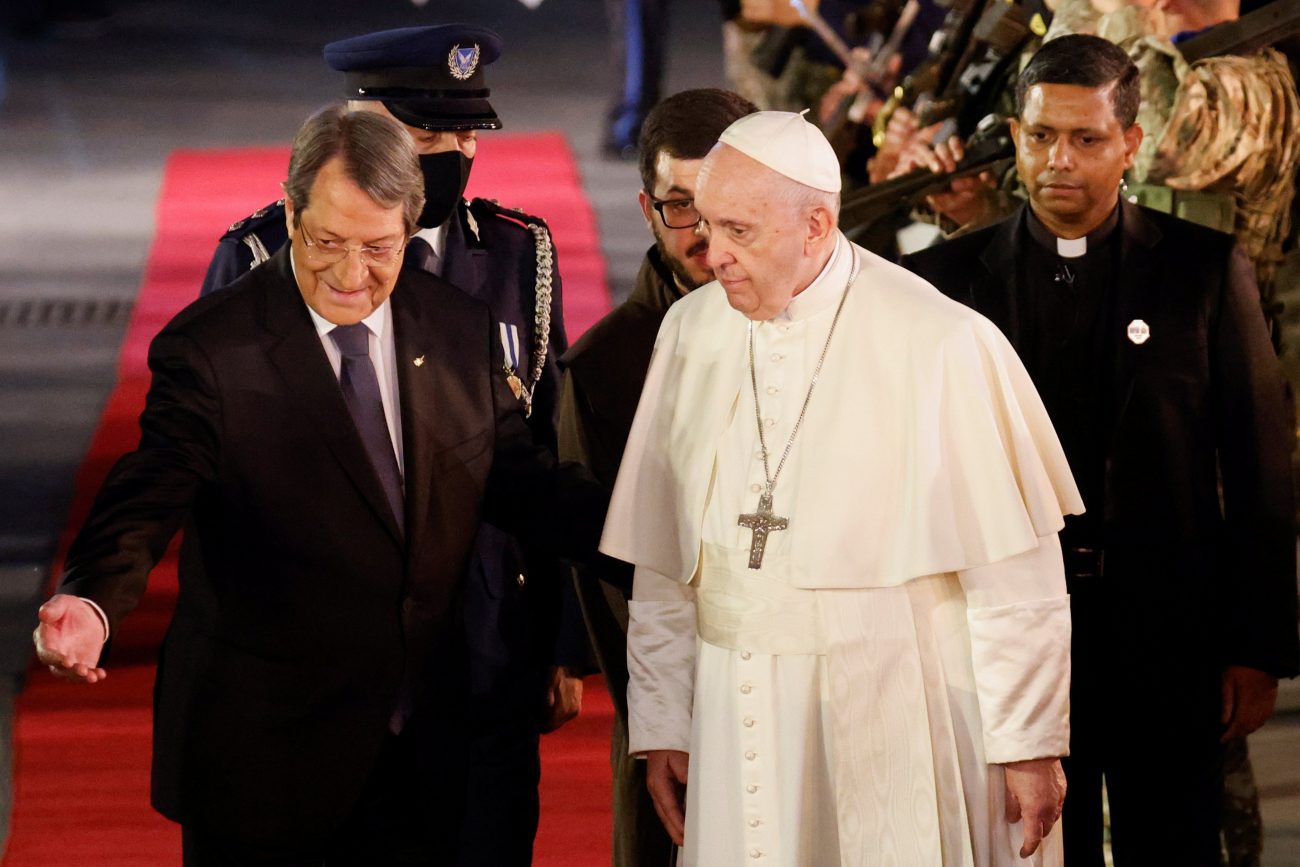 NICOSIA, Cyprus (CNS) — Sympathizing with the Cypriot government and citizens feeling overwhelmed by an influx of migrants and refugees, Pope Francis urged them to remember their history as a crossroads and meeting place of people of different cultures and traditions.

After a private meeting with Cypriot President Nicos Anastasiades Dec. 2, the pope told government officials and civic leaders that he saw his trip as a visit to “an island that, down through the centuries, has not isolated peoples but brought them together; to a land whose borders are the sea.”

“You are an open door, a harbor that unites,” he said.

Since late 2018, Cyprus has received more asylum-seekers per capita than any country in the European Union, in addition to hundreds of foreign workers. Especially with economic difficulties and a drop in tourism because of the COVID-19 pandemic, many people on the island are struggling.

Arriving at the presidential palace, Pope Francis paid homage to the late Archbishop Makarios III, the head of the Orthodox Church of Cyprus, who became the nation’s first president in 1960 and is still honored as the “father of the nation.”

“Makarios” in Greek means “blessed,” and the pope invoked the archbishop’s name to speak about the Eight Beatitudes as “the compass that, in every latitude, indicates the routes that Christians must take in the voyage of life.”

“Everyone can be ‘blessed,’ and blessed are above all the poor in spirit, those who have experienced suffering in their lives, those who live in meekness and mercy, all those who, without pretense, practice justice and are peacemakers,” the pope said.

When people live the beatitudes, he said, “the Gospel becomes youthful and fills society with fresh hope.”

But he acknowledged that it is not easy — either with the newer wave of migration or the decades-old problems of a literally divided island. Turkey is the only country in the world that recognizes the northern third of the island as the Republic of Northern Cyprus. Since 1974, U.N. peacekeepers have patrolled a buffer zone between the two parts of the island as U.N.-brokered negotiations continue to falter.

Pope Francis called Cyprus “a pearl of great price in the heart of the Mediterranean,” but also noted that pearls form only after a grain of sand or other irritant enters an oyster, and that the process takes time.

Anastasiades told the pope that the new migrants to Cyprus are not the only people who have been uprooted from their homes; thousands of Cypriots, especially Christians, whose roots are in the north, have been unable to return to their homes, he said.

And, while not explicitly blaming Turkey, as some people, do for allowing migrants to enter the European Union by crossing the sea to Cyprus, the president spoke of “large flows of illegal immigrants through the occupied territories” and acknowledged “we have encountered countless difficulties in their management.”

“It is for this reason that we would like to express our gratitude as a state for your initiative to transfer 50 immigrants from Cyprus to Italy,” Anastasiades said.

Matteo Bruni, director of the Vatican press office, declined Nov. 30 to comment on reports that the pope was making such arrangements, and Bruni was not available during the pope’s meeting with the president. News reports, however, said the immigrants would arrive in Italy in the weeks following the pope’s visit.

More than helping Cyprus, Anastasiades said, the pope’s “symbolic initiative” sends a message to the member countries of the European Union that they must do more to help the countries on the front line of immigration and to help those seeking safety and a better life for themselves and their families in Europe.

Speaking after the president, Pope Francis told the Cypriot leaders that he prays for peace on the island and a healing of its division.

The only way forward is dialogue, he said. “We know that it is no easy road; it is long and winding, but there is no other way to achieve reconciliation.” 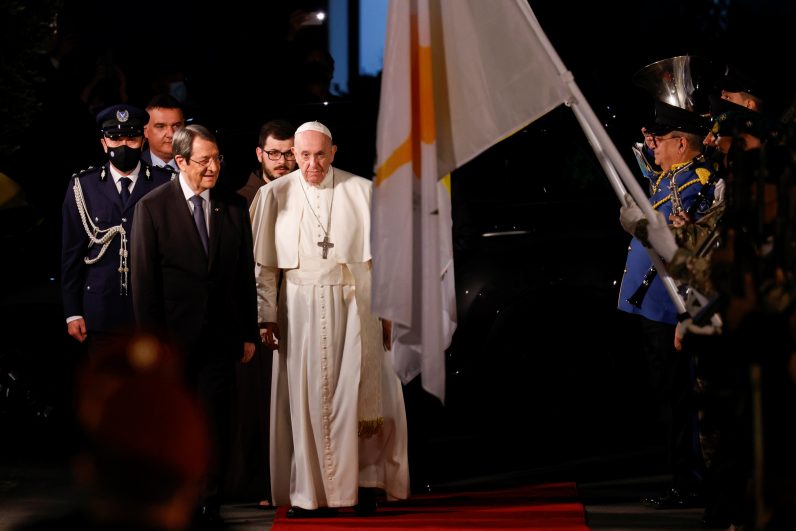 NEXT: Head of the Philadelphia’s Ukrainian Catholics named to Vatican panel