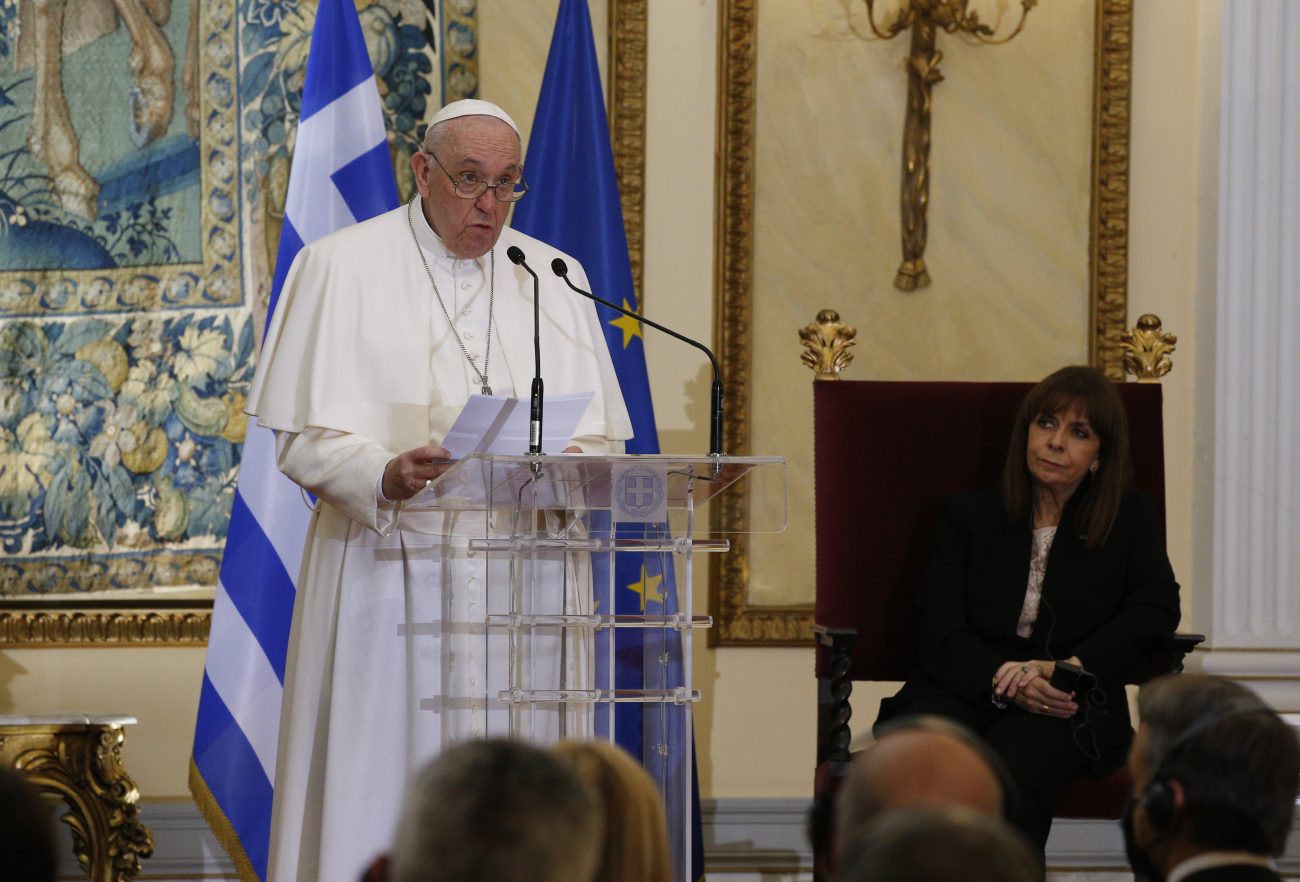 Pope Francis speaks as Greek President Katerina Sakellaropoulou looks on during a meeting with government authorities, civic leaders and the diplomatic corps at the presidential palace in Athens, Greece, Dec. 4, 2021. (CNS photo/Paul Haring)

ATHENS, Greece (CNS) — From Aristotle to St. Gregory Nazianzus, and from the Acropolis to the olive tree, Pope Francis drew from Greek history and culture to appeal for a faith that is lived in good works and a politics that truly seeks the common good.

Arriving in Greece from Cyprus Dec. 4, Pope Francis went directly from the airport to meetings with Greek President Katerina Sakellaropoulou, Prime Minister Kyriakos Mitsotakis and then a large group of political, civic and cultural representatives.

“Here democracy was born,” he told the representatives. “Yet we cannot avoid noting with concern how today — and not only in Europe — we are witnessing a retreat from democracy.”

“Democracy requires participation and involvement on the part of all; consequently, it demands hard work and patience,” he said. “It is complex, whereas authoritarianism is peremptory, and populism’s easy answers appear attractive.”

A political stance that seeks only popularity and easy answers is not worthy either of the description politics or of a place in a democracy, Pope Francis said.

“Politics is, and ought to be in practice, a good thing, as the supreme responsibility of citizens and as the art of the common good,” he said. “So that the good can be truly shared, particular attention — I would even say priority — should be given to the weaker strata of society.”

Speaking before the pope, Sakellaropoulou told him the Christian churches’ preaching and work for “unity and concord” and their concern for migrants and refugees, the poor, the environment and all who are suffering because of COVID-19 are important not just for believers.

“It is directly related to the politics of care and humanity and paves the way for peaceful coexistence and prosperity for all of us,” she said. “The safeguarding of human dignity and social cohesion is the challenge that gives meaning to the relationship between ecclesiastical and secular authorities in a global society with inexhaustible potential, but also with painful contradictions.”

Pope Francis agreed. The history, philosophy and faith of the Greeks throughout the centuries urge people to look “toward the heights, toward God,” but also to look across the seas to recognize themselves as citizens not only of their cities or country, but of the world.

While setting aside individual or even national interests on behalf of the common good of all can sound utopic, the pope said, it is humanity’s only concrete hope.

Arriving in Athens just a few weeks after the annual olive harvest, the pope noted the tree is common on every shore of the Mediterranean and, like after the great biblical flood, can be “the symbol of recovery, of the strength to begin anew by changing our way of life, renewing our proper relationship with the Creator, other creatures and all creation.”

Migrants and refugees are a special group of people that need particular care now — and a greater helping hand from all European countries, not just Greece, the pope said. But many European countries, “prey to forms of nationalistic self-interest,” refuse to help and make the European Union appear to be losing its identity as “an engine of solidarity.”

“I would like to encourage once again a global, communitarian vision with regard to the issue of migration, and to urge that attention be paid to those in greatest need, so that, in proportion to each country’s means, they will be welcomed, protected, promoted and integrated, in full respect for their human rights and dignity,” he said.

Intelligent, European-wide policies for welcoming newcomers, he said, will guarantee “a future marked by peaceful coexistence with all those who increasingly are forced to flee in search of a new home and new hope. They are the protagonists of a horrendous modern Odyssey,” he added, referring to Homer’s epic poem.

Pope Francis ended his speech expressing the hope that “from this city, from this cradle of civilization, may there ever continue to resound a message that lifts our gaze both on high and toward others; that democracy may be the response to the siren songs of authoritarianism; and that individualism and indifference may be overcome by concern for others, for the poor and for creation.”

“These,” he said, “are essential foundations for the renewed humanity which our time, and our Europe, need.” 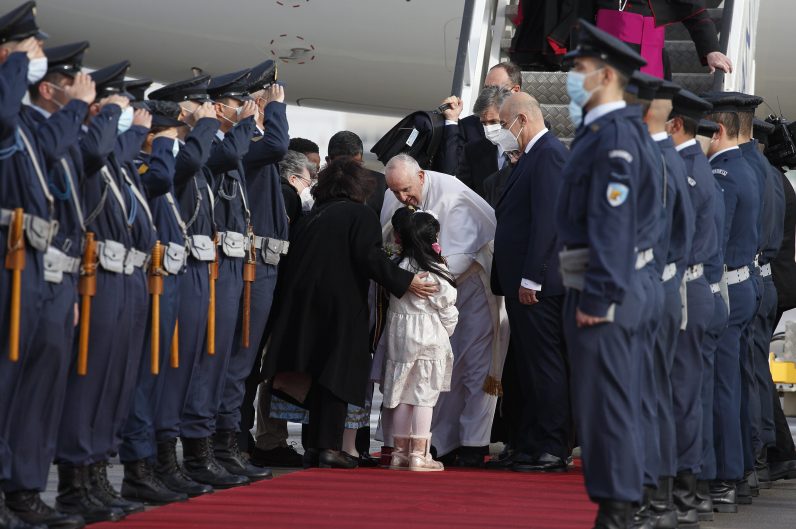 Pope Francis greets a child as he arrives at the international airport in Athens, Greece, Dec. 4, 2021. The pope was welcomed by Nikos Dendias, Greek minister for foreign affairs. (CNS photo/Paul Haring)