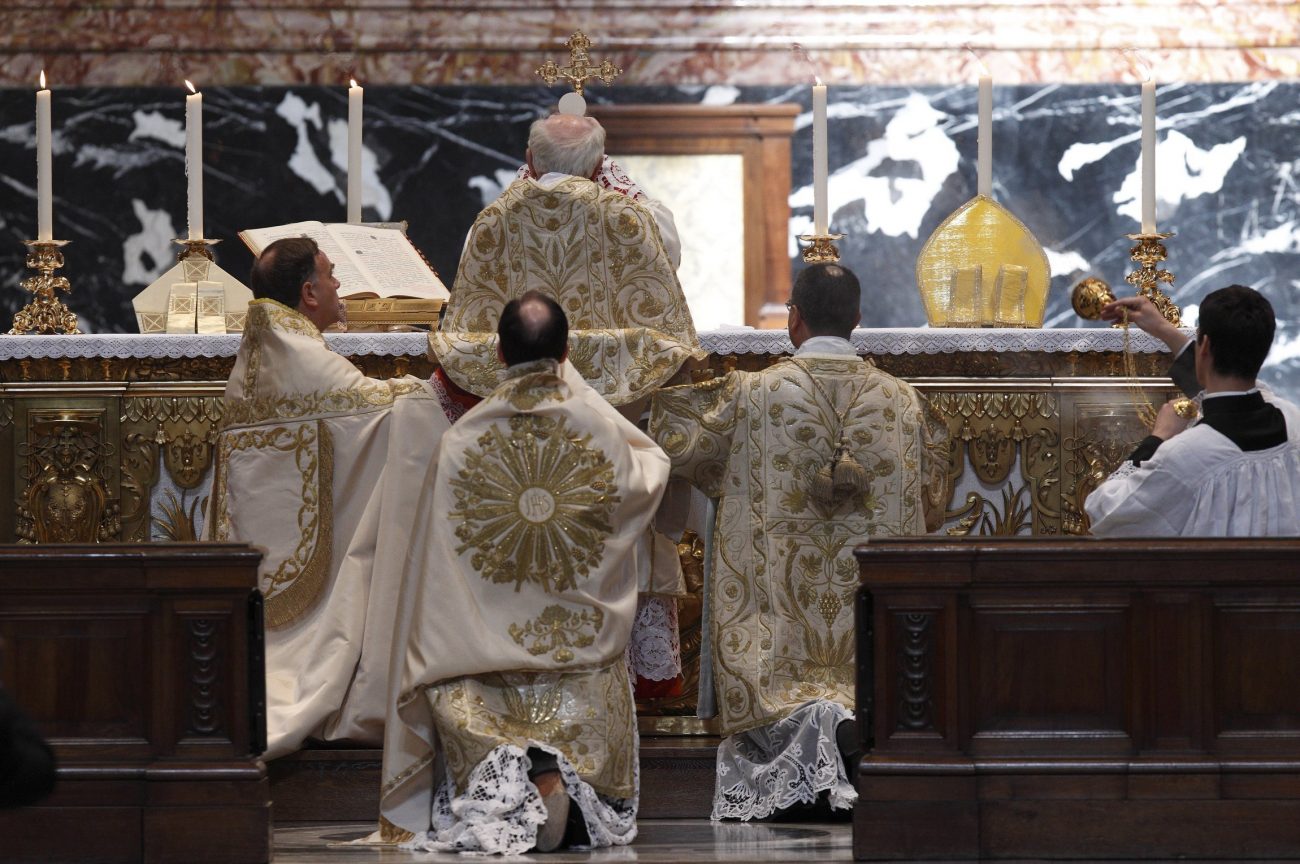 Cardinal Walter Brandmuller elevates the Eucharist during a Tridentine Mass at the Altar of the Chair in St. Peter's Basilica at the Vatican May 15, 2011. (CNS photo/Paul Haring)

VATICAN CITY (CNS) — Responding to 11 questions it said had been raised about Pope Francis’ document restricting celebrations of the pre-Vatican II Mass, the Congregation for Divine Worship and the Sacraments offered a few concessions to bishops but insisted the entire Latin-rite Catholic Church must move toward celebrating only one form of the Mass and sacraments.

“It is sad to see how the deepest bond of unity, the sharing in the one bread broken which is his body offered so that all may be one, becomes a cause for division,” wrote Archbishop Arthur Roche, prefect of the congregation, in a document published Dec. 18.

Writing to the presidents of bishops’ conferences, the archbishop said, “As pastors we must not lend ourselves to sterile polemics, capable only of creating division, in which the ritual itself is often exploited by ideological viewpoints.”

In July, Pope Francis promulgated his apostolic letter “Traditionis Custodes” (Guardians of the Tradition), declaring the liturgical books promulgated after the Second Vatican Council to be “the unique expression of the ‘lex orandi’ (law of worship) of the Roman Rite,” restoring the obligation of priests to have their bishops’ permission to celebrate according to the “extraordinary” or pre-Vatican II Mass and ordering bishops not to establish any new groups or parishes in their dioceses devoted to the old liturgy.

The document overturned or severely restricted the permissions St. John Paul II and Pope Benedict XVI had given to celebrate the so-called Tridentine-rite Mass as an outreach to followers of the late Archbishop Marcel Lefebvre and to minister to Catholics attached to the older ritual.

In his document, Pope Francis asked bishops to “designate one or more locations where the faithful adherents of these groups may gather for the Eucharistic celebration,” but he said those locations should not be parish churches and the bishops should not establish new “personal parishes” solely for celebrations in the old rite.

Archbishop Roche said several bishops asked if it would be possible for them to request permission from the Vatican to allow the celebrations in parish churches when other suitable locations were not available.

“The exclusion of the parish church is intended to affirm that the celebration of the Eucharist according to the previous rite, being a concession limited to these groups, is not part of the ordinary life of the parish community,” the archbishop wrote.

However, he said the Vatican would consider bishops’ requests for exceptions, but “such a celebration should not be included in the parish Mass schedule, since it is attended only by the faithful who are members of the said group. Finally, it should not be held at the same time as the pastoral activities of the parish community.”

And, he said, “it is to be understood that when another venue becomes available, this permission will be withdrawn.”

Another question regarded the use of other pre-Vatican II rituals for the celebrations of other sacraments. Archbishop Roche said that baptisms, confession, marriages and the anointing of the sick could be celebrated according to the old rites, but not confirmation or ordination. And, he said, that permission is limited to “personal parishes” totally dedicated to the celebration of the older liturgy.

— Archbishop Roche said a priest who does not recognize “the validity and legitimacy of concelebration” and, particularly, who refuses to concelebrate, even at the annual chrism Mass with the bishop, must not be given permission to celebrate the old rite since the refusal “seems to express a lack of acceptance of the liturgical reform and a lack of ecclesial communion with the bishop.”

— He said the insistence in “Traditionis Custodes” that a bishop obtain from the Vatican permission to allow a priest ordained after the document’s publication to celebrate the old liturgy “is not merely a consultative opinion, but a necessary authorization.”

— Deacons and other instituted ministers participating in celebrations of the old rite also must have the permission of the bishop, just like the priests presiding do.

NEXT: Cardinal Turkson says he offered to resign at end of his term