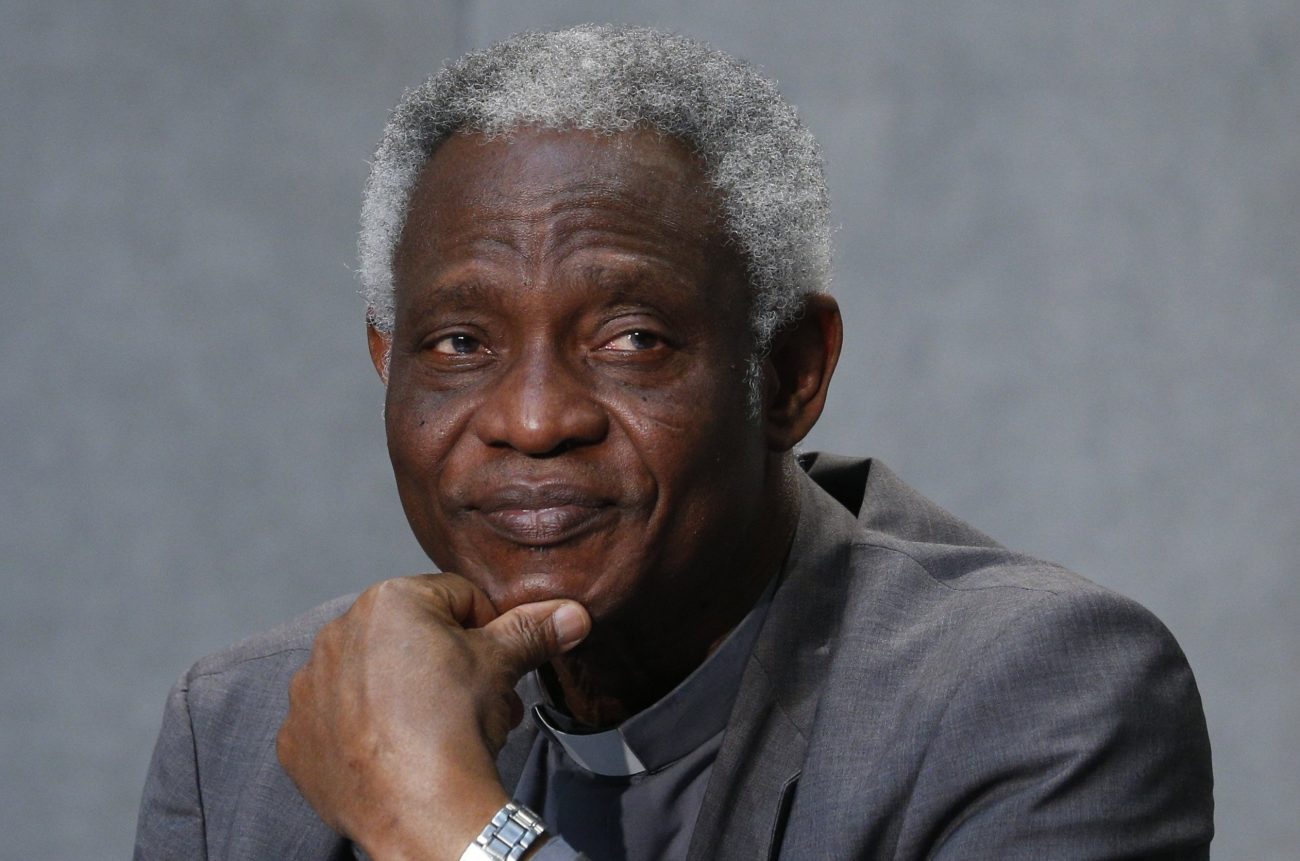 Cardinal Peter Turkson, prefect of the Vatican Dicastery for Promoting Integral Human Development, participates in a news conference to unveil a new platform for action based on Pope Francis' 2015 encyclical, Laudato Si', at the Vatican in this May 25, 2021, file photo. (CNS photo/Paul Haring)

VATICAN CITY (CNS) — After a dozen years as a top Vatican cardinal, Cardinal Peter Turkson said he offered Pope Francis his resignation because he was at the end of his five-year appointment as prefect of the Dicastery for Promoting Integral Human Development.

Presenting Pope Francis’ message for World Peace Day 2022 at a Vatican news conference Dec. 21, the 73-year-old cardinal told reporters, “All assignments, appointments in the Holy See have a five-year limit. And when five years are up, it is expected that we place our mandate back in the hands of the Holy Father and await whether he confirms, reassigns or prolongs the appointment.”

The cardinal said he did the same in the past, as well, and not just as head of a dicastery, but also as a member of other Vatican congregations and councils.

The cardinal, who had had a private meeting with the pope Dec. 20, did not provide any details about the meeting. All he said was that he is waiting to hear from Pope Francis.

Cardinal Turkson, who was born in Nsuta-Wassaw, Ghana, is the only African currently heading a major Vatican office.

Pope Francis had announced the creation of the Dicastery for Promoting Integral Human Development in 2016, merging the former pontifical councils for Justice and Peace, Cor Unum, Migrants and Travelers, and Health Care Ministry. Cardinal Turkson had led the Pontifical Council for Justice and Peace since 2009.

Particularly with its focus on ecology, migration and economic justice, the dicastery works on many of the issues closest to the heart of Pope Francis.

Finding ways to effectively and efficiently merge the four pontifical councils and their staffs was seen as a major management challenge. In June, Pope Francis asked Cardinal Blase J. Cupich of Chicago to conduct a visitation of the dicastery “in the context of a normal examination of the activity of the dicasteries, aimed at obtaining an updated understanding on the conditions in which they operate.”

Similar visitations had been conducted of the congregations for Clergy and for Divine Worship and the Sacraments before new prefects were appointed for each.

In August, Pope Francis named Salesian Sister Alessandra Smerilli as interim secretary of the human development dicastery, after the resignation of Msgr. Bruno-Marie Duffé, who served as secretary for four years; Argentine Father Augusto Zampini, who was adjunct secretary of the office and coordinator of the Vatican’s COVID-19 Commission, also left.

Sister Smerilli also was named to the management team of the Vatican’s COVID-19 Commission along with Cardinal Turkson and Scalabrinian Father Fabio Baggio, undersecretary of the dicastery’s Migrants and Refugees Section.

Pope Francis established the commission in April 2020 to coordinate the Vatican’s response to the pandemic, assist local churches around the globe and advocate on an international level to ensure responses to COVID-19’s health and financial challenges promote greater justice, equality, concern for the poor and respect for the environment. The commission was exempted from the Vatican’s hiring freeze during the pandemic.

It was during the second special Synod of Bishops for Africa in October 2009 that now-retired Pope Benedict XVI announced he was naming Cardinal Turkson to head the justice and peace office. At the time, the cardinal was serving as the synod’s recording secretary — a key role many had already seen as a clear sign of papal favor.

In 2003, he was in his 10th year as archbishop of Cape Coast, Ghana, when St. John Paul II inducted him into the College of Cardinals — the first Ghanaian to receive a red hat.

Born Oct. 11, 1948, he studied at St. Theresa’s Minor Seminary in Amisano and was ordained a priest in 1975. From 1976 to 1980, he studied in Rome, earning a licentiate in sacred Scriptures at the Pontifical Biblical Institute. From 1987 to 1992, he studied for his doctorate at the same institute.

NEXT: Caritas appeals for aid after typhoon claims over 200 lives in Philippines