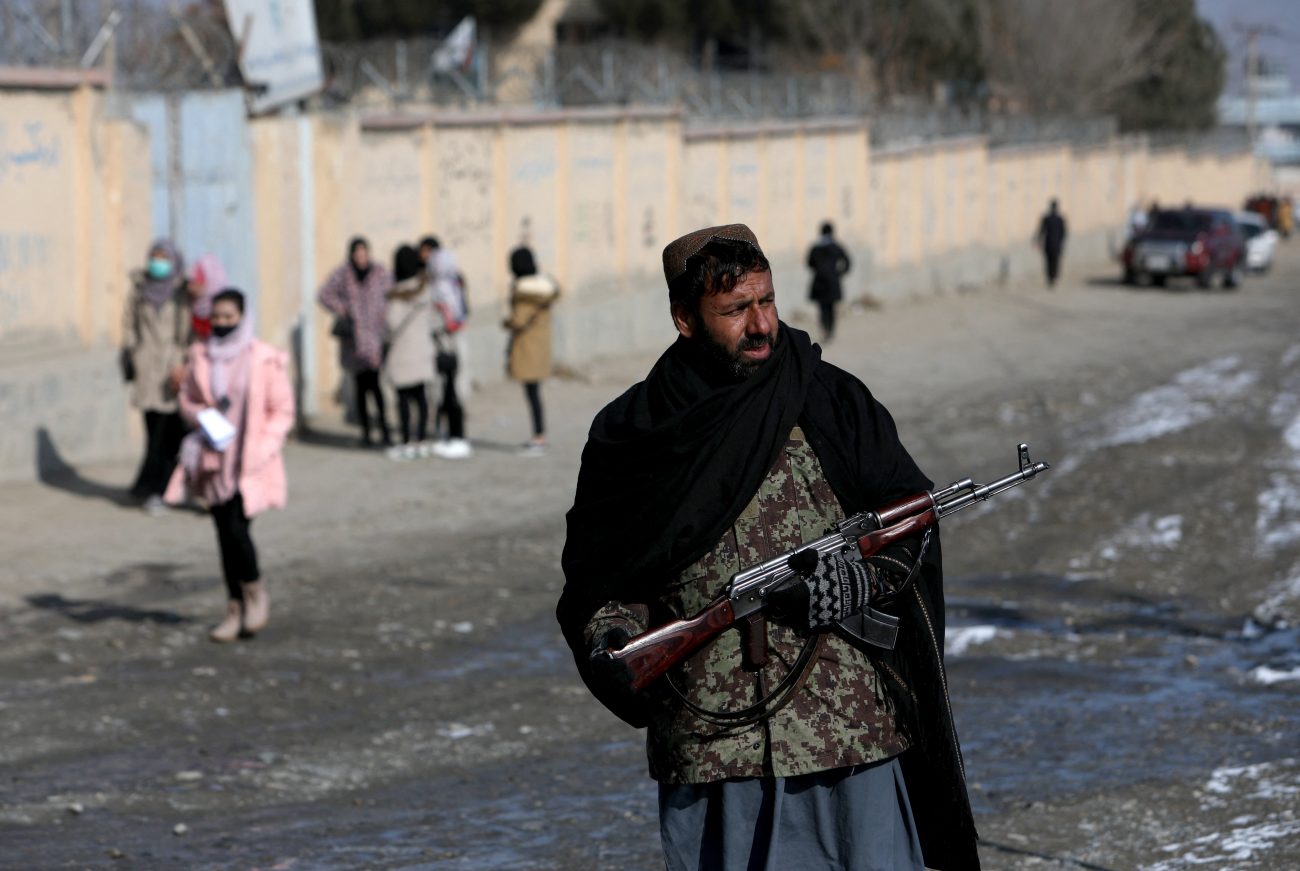 WASHINGTON (CNS) — Although the United States left Afghanistan at the end of August, it left behind thousands still affected by the resulting turmoil.

Among them is an Afghan Catholic family of five. Their names were not disclosed to Catholic News Service for fear of harm — or worse — coming to them if their names are known.

These refugees wait each day at an Afghan refugee camp in the United Arab Emirates for an interview that advances the process of them heading to a welcoming country, hoping their current host won’t return them to Afghanistan. With each passing day without such an interview, the anxiety grows that they’ll be returned to the home they so desperately sought to leave.

“If the Taliban found them, they’d probably kill them,” said Mark Pfeifle, president and CEO of Off The Record Strategies, whose website bills itself as “force multipliers who offer superior personalized service and innovative problem solving while operating under total confidentiality.”

The refugees have “applied for Special Immigrant Visas, but the State Department is extraordinarily slow and disorganized,” Pfeifle said in an email to CNS. Such visas are given, he said, for extenuating circumstances for people employed by the U.S. government under the Armed Forces chief of mission.

But until that interview, “they’re just in purgatory, waiting,” he said.

In a Jan. 4 phone interview, Pfeifle listed obstacles to getting this family approved for visas.

“Since we did a full and immediate withdrawal, it took almost all the resources out of Afghanistan. An immigration status background check is far more difficult” as there is “no capacity to interview relatives and community members” about applicants, he said.

“The second thing is the overload of the system. It’s just not prepared to do a successful withdrawal. They similarly weren’t prepared for the huge influx of Afghans coming over from Afghanistan to the U.S.,” Pfeifle added.

“Because of the challenges overall with immigration, DHS (Department of Homeland Security) and enormous challenges on the U.S. southern border, you add to them tens of thousands of Afghan refugees, they’re absolutely overburdened,” he said.

Pfeifle worked for the National Security Agency in the White House of President George W. Bush as deputy national security adviser for strategic communications and global outreach, so he’s had some experience in pulling the levers of power.

Adult members of the refugee family, who served as translators and interpreters in Afghanistan, spent Christmas in their refugee camp, “which makes my heart hurt,” Pfeifle said.

There were times when, according to Pfeifle, the Taliban would approach them and ask, “Who are you? Are you Muslim?” “And they would have to lie and say they were, which goes against my Christian upbringing,” he said.

“I’m a Lutheran. My Protestant upbringing, you talk proudly about your religion and you try to bring other people to it. But that’s hypothetic. You just cannot tell people who could harm or kill you that you’re a proud Christian and a proud Catholic.”

Pfeifle asked: “Who from the U.S. State Department is in charge of Afghan refugees and making sure they’re safe and healthy? … Who wakes up every day and says, ‘I’m committed to getting this stuff done?'”

Getting these refugees to a safe place has also stymied Jill Kelley, whom Pfeifle called “a diplomatic fixer.” Kelley, a socialite in Tampa, Florida, who works with diplomats and military figures, is the president of Military Diplomacy Strategies, an international advisory firm.

Kelley, who is Catholic, was born in Lebanon and knows firsthand the peril of being targeted in the country of your birth by unfriendly elements.

“We would’ve been killed if we weren’t able to come to the United States,” Kelley told CNS in a Jan. 5 phone interview. “People don’t understand people coming from non-Catholic and non-European countries” and how they can be “targets” in a civil war.

On Aug. 15, 2021, she was first drawn in to the effort to rescue Afghan helpers who were terrified at being left behind.

“I started calling a couple of VIPs in Afghanistan and they were so receptive to helping me,” she recalled. “I did not know the people I was helping. All I knew were the relatives.” Her contacts signaled they were willing to help.

Spiriting people out of a country now hostile to some of its own citizens is not cheap, and “I’m spending all this money out of my own pocket,” Kelley said. But the biggest problem was not the airport itself, but that the Taliban had already been ceded control of the roads leading to the airport in Kabul, the capital. But she also lashed out at “the size of the incompetence” inside the airport.

When she heard in late August that “America was pulling out …and of the airport, too,” Kelley recounted, “I remember saying, ‘Oh, my God. Thank God I got out the people I got out.’ … Imagine what it will be like when we don’t even have people at the airport.”

She found out soon enough.

Kelley told CNS she got a call from an active-duty Marine telling her, “We need to save this family.”

“I couldn’t walk away,” she said, or else “they’re going to be slaughtered like pigs.”

Kelley said she couldn’t stand the thought of them dying “miserable unwarranted deaths because they believe in Jesus.”

Around the same time, she got a call from an LGBTQ activist in Afghanistan who would have been marked for certain death due to his sexual orientation. So Kelley put him with the Afghan Catholic family. But that wasn’t the end of it.

The group also included an 80-year-old U.S. grandmother and two active-duty U.S. military families. Kelley, with the help of her operatives in Afghanistan, moved them all from safe house to safe house, staying a step ahead of the Taliban.

“It was important to me because they were vulnerable,” she said. “They’re not Afghan commandos.”

There was one episode while they were all on the run when the 80-year-old grandmother got sick. “She was diabetic and she needed her medicine,” Kelley said.

Members of the Afghan Catholic family — in “a dangerous mission to undertake in the midst of chaos,” Pfeifle said — found the medicine she needed and got it to her. “I thought to myself, ‘My God. If I didn’t have this Catholic family in the safe house, she would be dead,'” Kelley said.

She added she was astounded by “how much they were helping everybody else when they didn’t have their own parachute,” seeing as how they were “giving medical care and translating at the same time.”

Despite a series of middle-of-the-night escapes from one safe house to another, the Taliban broke into one safe house. Kelley said they beat up the Christians but let the 80-year-old go. The active-duty military couple told them the gay man was their son.

Kelley finally found the right strings to pull to get them out of Afghanistan where they waited at the UAE refugee camp.

The active-duty military families are back in the United States, Kelley said. So is the 80-year-old grandmother. But not the Afghans.

“Everybody got their final interview but these Catholics,” Kelley fumed. Pfeifle said their “religious minority status” doesn’t automatically qualify them for expedited treatment.

“If they were sent back, they are not going to survive. This is the last hope for them,” Kelley said. “Somebody help me help them. I cannot do it by myself anymore.”

Both Kelley and Pfeifle hold out hope that President Joe Biden will become aware of the plight of these refugees and hasten their arrival to the United States.

“I know that President Biden is a devout Catholic,” Pfeifle said. “I know that if he heard this story, he would be crestfallen, and we’re just trying all attempts at how do we help these individuals who have been so helpful to us over the decades of Operation Enduring Freedom?”

Kelley, voicing her disappointment at the lack of response of Christian — “not Catholic,” she stressed — organizations whose help she sought, added: “I am hopeful because President Biden is Catholic. I am hopeful that it would be relevant to him.”