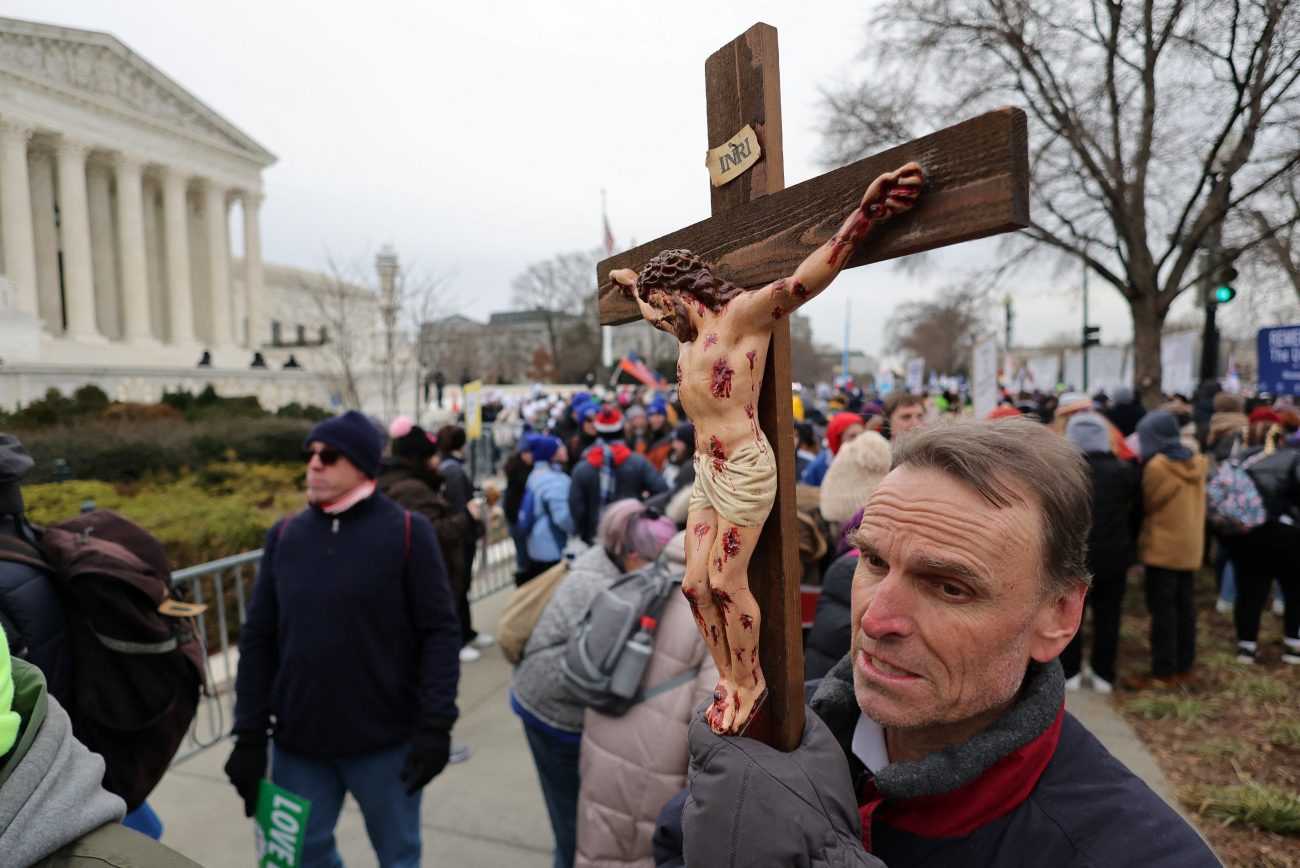 A man carries a crucifix outside the U.S. Supreme Court while participating in the 49th annual March for Life in Washington Jan. 21, 2022. (CNS photo/Jim Bourg, Reuters)

WASHINGTON (CNS) — The Catholic Church’s opposition to abortion “is a response of love for both mothers and their children in the womb,” said the chairman of the U.S. bishops’ pro-life committee in a statement issued to mark the Jan. 22 anniversary of the Supreme Court’s Roe v. Wade decision making abortion legal in all 50 states.

“The church’s teaching proclaims a message of life, reminding us that every life is a sacred gift from God from the moment of conception until natural death,” said Baltimore Archbishop William E. Lori.

In November, the archbishop began a three-year term as the chairman of the U.S. Conference of Catholic Bishops’ Committee on Pro-Life Activities.

The archbishop’s Jan. 21 statement came as thousands of pro-life supporters gathered to “stand for the rights of the unborn” at the 49th annual March for Life on the National Mall in Washington.

“Equality Begins in the Womb” was the theme of this year’s event, which always includes a rally with dozens of speakers on the Mall, followed by a march to the U.S. Supreme Court.

The March for Life Defense and Education Fund, which sponsors the annual event, and many pro-life groups said they were hopeful this year’s rally would mark a pivotal turning point for abortion in the U.S. Many expect the Supreme Court’s ruling on a Mississippi law banning most abortions after 15 weeks will lead to limiting Roe or overturning it.

“In remembrance of the tragic anniversary of Roe v. Wade, and in petition for full restoration of the legal guarantee of the right to life for all individuals,” the U.S. Catholic Church “recognizes the National Day of Prayer for the Legal Protection of Unborn Children,” observed every Jan. 22, Archbishop Lori said.

He, too, pointed to the Mississippi case, Dobbs v. Jackson Women’s Health, and invited all Catholics and other people of goodwill “to fast and pray on this day, and frequently between now and June, when we anticipate a decision” on Dobbs.

“We pray that this important case might reverse Roe and its unjust abortion license,” Archbishop Lori said.

“We cannot build a truly just society and remain complacent when faced with the massive impact of Roe v. Wade, which has taken over 60 million lives since 1973,” he said. “May we pray, fast, and work for the day when the gift of every human life is protected in law and welcomed in love.”

Archbishop Lori was the principal celebrant and homilist for the Jan. 20 opening Mass of the annual National Prayer Vigil for Life at the Basilica of the National Shrine of the Immaculate Conception.

Early Jan. 21, Cardinal Seán P. O’Malley of Boston likewise was the principal celebrant and homilist for the vigil’s closing Mass, and many who attended left the basilica to head to the National Mall for the March for Life.