Pope, cardinal pray for victims of Bronx fire that killed 17 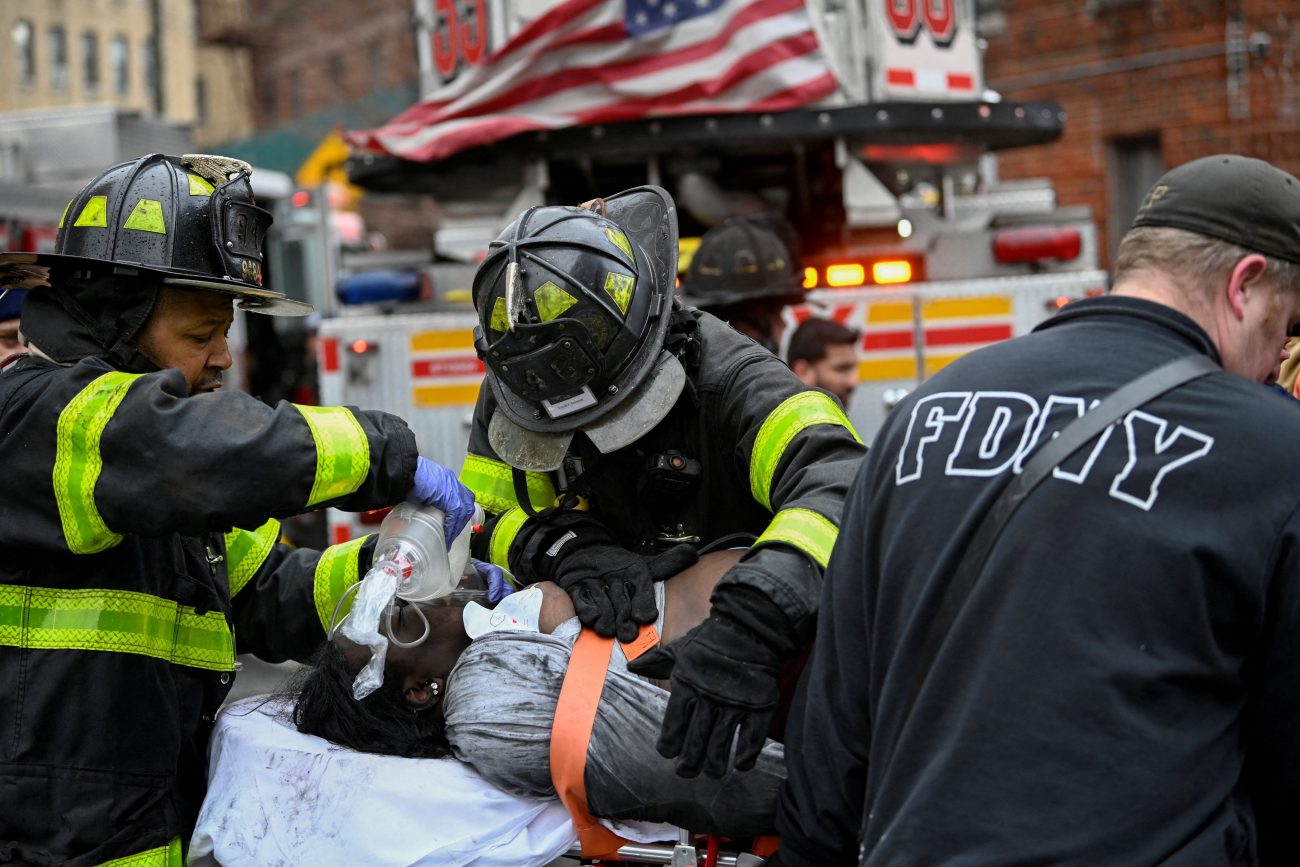 Firefighters in the Bronx borough of New York City provide medical aid as they respond to an apartment building fire Jan. 9, 2022. Pope Francis sent his condolences to families of the 17 people killed in the fire. (CNS photo/Lloyd Mitchell, Reuters)

WASHINGTON (CNS) — Pope Francis issued condolences to families of those killed in an Jan. 9 apartment building blaze in the Bronx that killed 17 people, including eight children.

Initially, city officials said the death toll was 19 people and nine children, but they revised this figure the afternoon of Jan. 10.

In a Jan. 10 telegram to Cardinal Timothy M. Dolan of New York, the archdiocese where the apartment building is located, Vatican Secretary of State Cardinal Pietro Parolin said: “His Holiness Pope Francis was saddened to learn of the recent devastating fire in the Bronx in which a number of children lost their lives.”

“In offering heartfelt condolences and the assurance of his spiritual closeness to those affected by this tragedy, he entrusts the victims and their families to the merciful love of almighty God and invokes upon all consolation and strength in the Lord,” the telegram said.

The five-alarm fire injured more than 60 others, with dozens going to hospitals in critical condition. More than 200 firefighters responded to the blaze in the 19-story building.

Cardinal Dolan planned to visit the site Jan. 10 and tweeted: “It doesn’t get worse than what we witnessed in New York yesterday at that tragic fire in the Bronx. I’m visiting the scene with the fire companies that responded so that I might see how the church can assist. Thank God for the @FDNY.”

St. Simon Stock-St. Joseph Parish, which serves the Bronx neighborhood where the apartment building is located, celebrated a special Mass the evening of Jan. 10 for the deceased and all affected by the tragedy. An interfaith prayer vigil also took place that evening near the apartment complex.

Carmelite Father Michael Kissane, parish pastor, reported that the church is located one block from the apartment building. The apartment complex was home to a large number of Gambian immigrants, many of whom are Muslims.

Only one registered family from the parish lived in the building. They lost everything in the fire, the priest said, and are now staying with a family member in New Jersey. 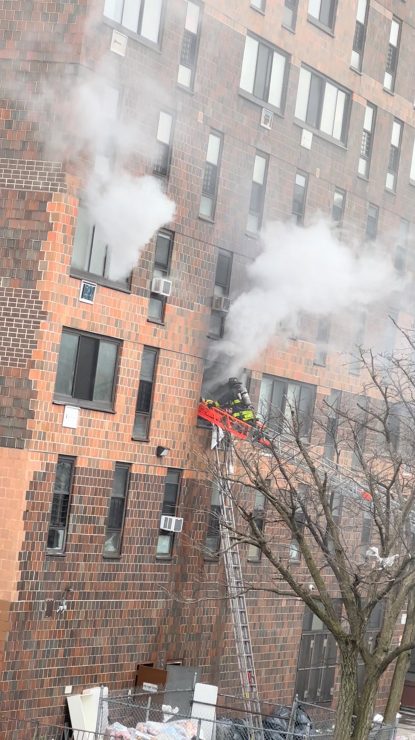 Smoke raises from windows during an apartment building fire in the Bronx borough of New York City Jan. 9, 2022, in this screen grab from a video obtained from social media. (CNS photo Tanisha Ashe, via Reuters)

Brooklyn Bishop Robert J. Brennan, who was born in the Bronx, said in a Jan. 10 statement that he was “filled with much sadness and heartache” in the wake of the fire.

“I stand in solidarity with our city on behalf of my brothers and sisters of the Fordham Heights community who have been impacted. I remember in my prayers the 17 lives lost and ask God to heal those who have been injured,” he said.

The bishop also thanked all the first responders, especially local police and firefighters who “were on the scene within minutes and saved many lives.”

He said he was “grateful for the efforts of the government agencies and local organizations, who are standing alongside the displaced families assisting them in recovery.”

An early indication was that a space heater may have set off the fire in the 120-unit building. New York City Fire Commissioner Louis Nigro said victims were found “on every floor, in stairways.”

The building, Twin Parks North West, was built in 1972. One person who escaped the fire said it had interior stairways, but no exterior fire escapes.

It was the second U.S. apartment fire in less than a week that claimed double-digit casualties. A dozen fatalities were reported from a Philadelphia apartment fire Jan. 5, eight of them children.

Catholic Charities of the Archdiocese of New York has set up a page where people can give donations to help the fire victims here.

Contributing to this story was Greg Shemitz in New York.