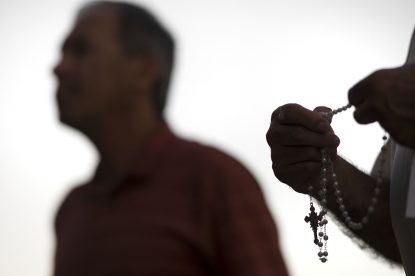 An attendee prays the rosary Oct. 1, 2018, during a public session on the issue of clergy sexual abuse at Our Mother of Confidence Parish Hall in San Diego. While progress has been made on the clergy sexual abuse crisis in the United States and elsewhere, much more remains to be done, said panelists at a Jan. 20, 2022, webinar on the issue sponsored in part by Georgetown University. (CNS photo/David Maung)

WASHINGTON (CNS) — While progress has been made on the clergy sexual abuse crisis in the United States and elsewhere, much more remains to be done, said panelists at a Jan. 20 webinar on the issue sponsored in part by Georgetown University.

Those sentiments were shared during the webinar, “Listening to the Voices of Survivors of Clergy Sexual Abuse,” by investigators of past abuse, relatives of victims and those who counsel survivors.

“It was a shock, it was a deep shock to discover the damages that were incurred due to these sexual abuses,” said Jean-Marc Sauvé, president of the French Institute of Administrative Sciences, who led an independent investigation into the history of clerical sexual abuse in the Catholic Church in France.

“We cannot understand and know the reality as it is” and its consequences, Sauvé said, “if we have not been able ourselves to touch the experience of the victims (including) the isolation, the shame and the guilt.”

Speaking through an interpreter, Sauvé said what he found during the investigation “scared me, deeply disgusted me” to the point where “I had to seek therapy.”

“It was a really painful experience that I had,” he said, adding that he really has some doubt these days about “the human mediation between the church — the men and the women that we are — and God our creator” and wonders “where do we go back to” from these revelations.

Other countries’ bishops’ conferences — and sometimes the federal governments — conduct their own nationwide investigations into clerical sex abuse, said Karen Terry, the principal investigator for two studies on sexual abuse of minors by U.S. priests for the John Jay College of Criminal Justice in New York City, where she is a professor in the criminal justice department.

“Many of them provide very similar recommendations, including reducing opportunities for abuse and improving accountability,” Terry said. “Many of them are survivor-focused,” she added, and “provide more of a road map for the steps the church can be taking moving forward.”

“The scientists in the German study did a good job but they were not as independent as the scientists in France,” said Jesuit Father Klaus Mertes, director of St. Blaise College in Baden-Württemberg, Germany. The German bishops, he added, “wanted to have control” over access to files.

“Hopes have been raised that probably will not be fulfilled” since the German study’s publication in 2018, Father Mertes added. One key issue for him: “How can the survivors be involved in such a way that they will not be instrumentalized again?”

Because of “the drip-drip-drip of revelations” in the Australian church, the prime minister appointed an investigatory commission, taking it out of the church’s hands, said Australian Father Richard Lennan, a professor of systematic theology at Boston College.

“This has haunted me for 50 years — personally, institutionally and professionally,” John Carr, co-director of Georgetown’s Initiative for Catholic Social Thought, said about the church’s clergy sex abuse crisis.

“Our response has been episodic, under pressure — from the media, from the courts, from public outrage,” Carr said. “The media uncovered this and was demonized” for doing so, as were the lawyers who represented abuse victims, he added.

The initiative Carr co-directs was one of the co-sponsors of the webinar, along with Georgetown University’s Berkley Center for Religion, Peace, and World Affairs; Office of Mission and Ministry; Georgetown Law Office of Mission and Ministry; and Collaborative on Global Children’s Issues. The Human Flourishing Program at Harvard University’s Institute for Quantitative Social Science also was a co-sponsor.

“There’s the crisis of clergy sexual abuse, and I’ve talked about the crushing nature of that, but there is also the crisis of a leadership failure that denied, ignored and facilitated this,” Carr said.

“We need to acknowledge how messy, how complicated, how hurtful” this has been, he added. “People are angry. People are hurt. There’s not a flow chart that measures this.”

“Well, Vatican II or celibacy didn’t give priests permission to abuse children,” he continued. “For me, the test is reform and change before healing and reconciliation — and the people who were responsible for the crisis can’t call for the healing.”

When approached for comment on the unfolding crisis, he recalled, “I told journalists that silence is a big problem — and I realized I had been silent myself. I never told my parents, never told my wife, never told my kids what had happened to me in high school. … And when I came forward as part of our dialogues, I came upon other survivors.”

For Carr, “silence is not an option,” adding, “There are measures of accountability,” but “we have a long way to go.”

“Any of us who do this work are going to suffer. That’s what compassion is: to suffer with,” said Sister Nuala Kenny, a Sister of Charity of Halifax, Nova Scotia. She entered religious life 60 years ago and is a pediatrician with nearly four decades of experience working with survivors of sexual abuse.

There is no national Canadian study, and no national registry of credibly accused clergy, “although some dioceses have tried,” she said.

“I’m proud of the insight of the insight of the Canadian bishops, I’m disappointed by the response,” Sister Kenny added. “The endemic denial of the Catholic Church has become compounded by tragedy. The degree of enthusiasm for the synod is breaking my ever-loving heart,” as the abuse crisis “is not on the agenda.”