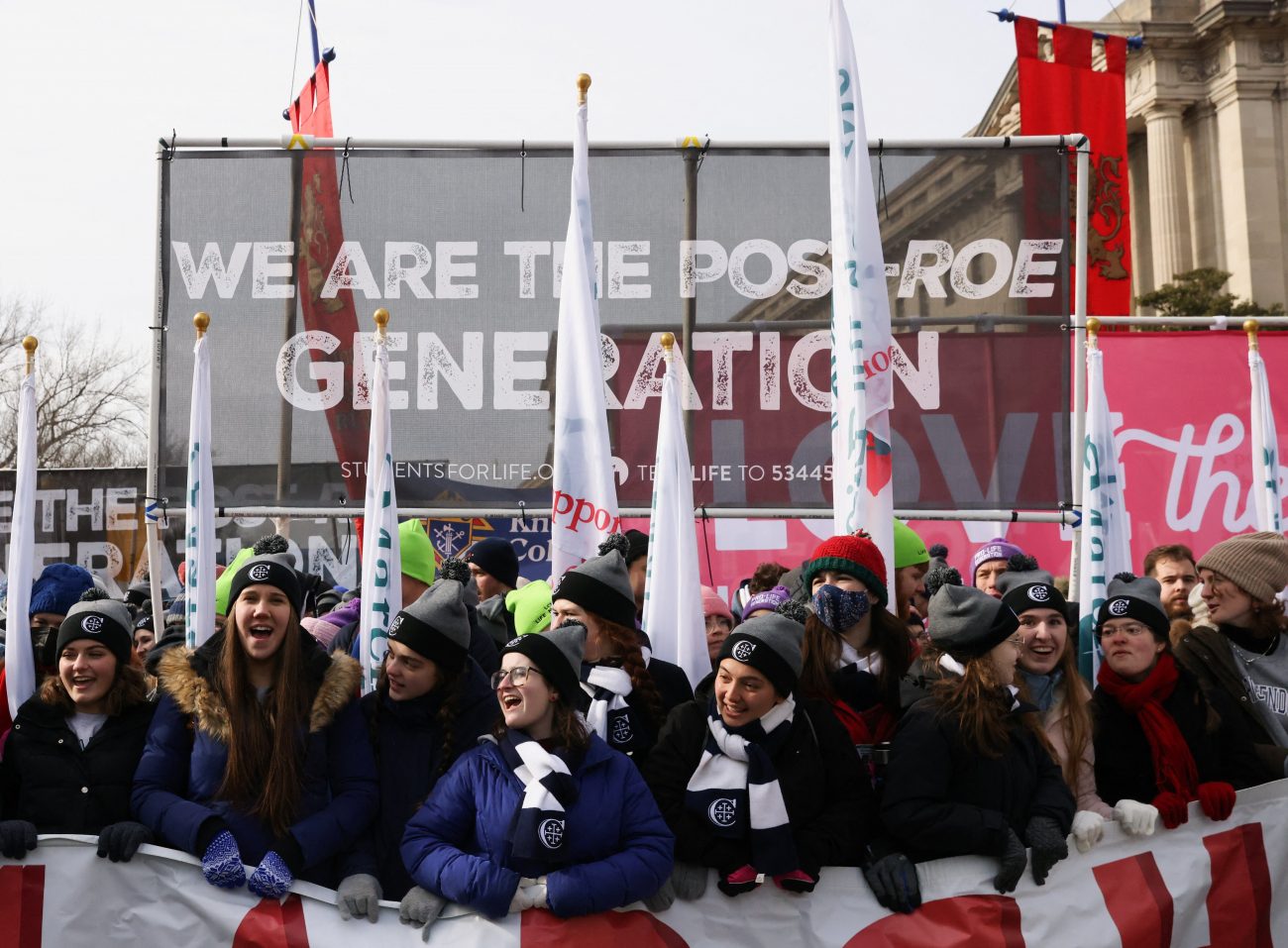 WASHINGTON (CNS) — Speakers at the annual March for Life on Washington’s National Mall Jan. 21 spoke of a likely tipping point in the current protest against legalized abortions in the United States, but they also urged the crowd to remain vigilant in their advocacy and support for the pro-life movement.

Speakers at the 90-minute rally, held under cloudy skies with temperatures in the 20s, were faith leaders, members of Congress, pro-life advocates, including women who had or almost had abortions, and actors.

Many of the speakers acknowledged that those in the crowd, bundled in winter coats and hats and standing close together, had to be cold, but they also commended their continued dedication in coming to the event each year to protest the 1973 Supreme Court’s Roe v. Wade decision legalizing abortion.

Jeanne Mancini, president of the March for Life Education and Defense Fund, and the rally’s emcee, said this was her 10th March for Life at the event’s podium and she said: “I am pretty sure I have never seen such an excitable crowd as you are; and I am so grateful.”

The excitement could have been partly from the event being back on after last year’s primarily virtual event amid the pandemic and on the heels of the Jan. 6 riot at the U.S. Capitol. But for many, the enthusiasm was echoed in the message from nearly every speaker: the potential for the Supreme Court to reverse its decision on abortion this year.

Rep. Chris Smith, R-N.J., who also has frequently addressed the march crowd, told them that this year they had “fresh hope and heightened expectation” awaiting the Supreme Court’s decision on Dobbs v. Jackson Women’s Health Organization.

“Today, after decades of noble struggle and sacrifice, we are hopeful that government-sanctioned violence against children and the exploitation of women by abortion is nearing an end — although in a very real way, the struggle to defend innocent human life now enters a critically important new phase,” he said.

The representative, who is a co-chair of the Congressional Pro-Life Caucus and was surrounded on the stage by about a dozen members of Congress, also noted the pro-life movement was “at the tipping point” and urged those who have been fighting for it for so long to “seize the opportunity with all the faith and seriousness we can muster.”

Dan Lipinski, a former Democratic House representative from Illinois, similarly stressed that “no matter what happens at the Supreme Court, we will continue to march.”

Other congressional leaders also addressed the crowd via taped messages shown on Jumbotron screens urging them to keep the momentum going.

Mancini told the crowd of mostly young people that she was happy to welcome them back and veering off her prepared remarks she advised them to go to first-aid tents or warming buses if they needed to get warm.

“We are hoping and praying that this year, 2022, will bring a historic change for life,” she said.

Like other speakers during the rally, she said that while the pro-life movement awaits the decision in the Dobbs case, “we need your dedication more than ever before.”

“If Roe falls, battle lines will change, but the fight for life will need to continue,” she added.

The theme for this year’s rally was “Equality Begins in the Womb,” and Mancini and other speakers highlighted how those advocating for equality need to recognize that it starts with the unborn.

Lisa Robertson, a cast member from “Duck Dynasty,” told the crowd about her personal struggles after having an abortion several years ago, but she also stressed her realization now that she could speak about it because she knew she had been forgiven. She encouraged the crowd to also be pro-adoption.

Kirk Cameron, best known for his role on the 1980s sitcom “Growing Pains,” similarly emphasized the blessing of adoption, noting that his wife and four of their six children were adopted.

Cameron said he was proud to be marching with this group to the Supreme Court and urged them to continue the spirit of the march when they returned to their homes.

Father Mike Schmitz echoed that same idea, telling the crowd that their very presence at this event “changes you.”

The priest of the Diocese of Duluth, Minnesota, who is a popular Catholic speaker, author and host of “Bible in a Year” podcast by Ascension Press, was a big hit with the crowd, which chanted “Father Mike!” after he left the stage.

The crowd also cheered “Katie! Katie!” for Katie Shaw, a pro-life advocate with Down syndrome who thanked her parents for choosing life and said she was saddened by all the friends she might have had who were aborted.

The rally, which always leads off the march, began and ended with prayer. The opening prayer was delivered by Archbishop Elpidophoros of America, a Greek Orthodox leader who was joined on the stage by Baltimore Archbishop William E. Lori, chairman of the U.S. bishops’ Committee on Pro-Life Activities.

The closing prayer was said by Cissie Graham Lynch, granddaughter of the well-known Southern Baptist minister the Rev. Billy Graham.

At the close of the rally, before participants made their way to Constitution Avenue to march to the Supreme Court, Mancini urged participants to recognize the work ahead for the pro-life movement and to contribute online or in baskets held out along the marching route by members of the Knights of Columbus.

She noted that Tom Hogan, one of the March for Life board members who had been directing marchers at this annual event for years, died in November. She said she was sure he would be “looking down on us and keeping us in line.”