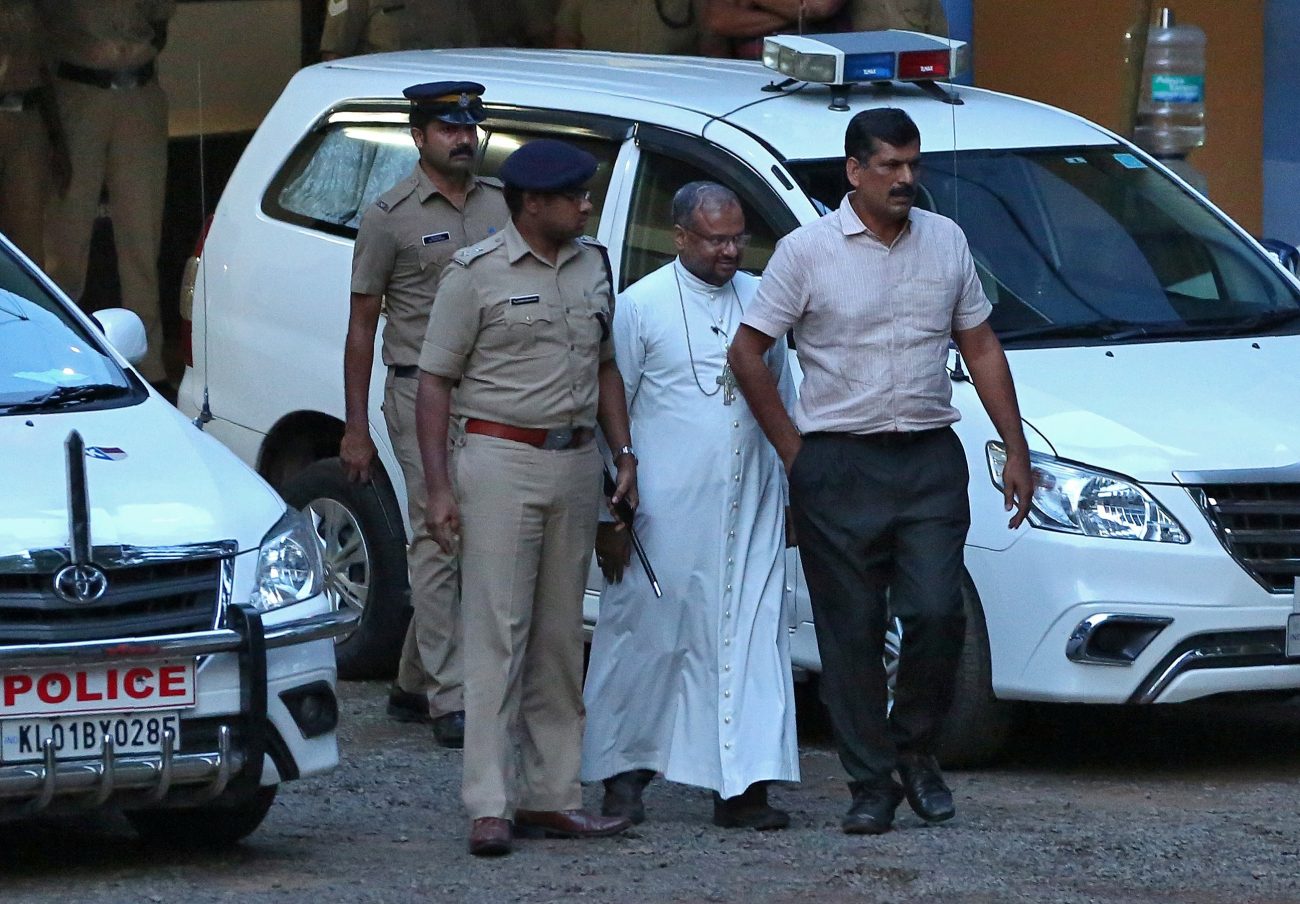 Bishop Franco Mulakkal is seen outside a crime branch office in Cochin, India, Sept. 19, 2018. On Jan. 14, 2022, a court in southern India's Kerala state acquitted him of all charges of raping a nun, saying the prosecution could not prove the allegations against him. (CNS photo/Sivaram V, Reuters)

KOTTAYAM, India (CNS) — A court has acquitted Bishop Franco Mulakkal of all charges of raping a nun, saying the prosecution could not prove the allegations against him.

The nun, a member of the Missionaries of Jesus congregation under the patronage of the bishop, accused him of raping her more than 13 times between 2014 and 2016 inside her convent in Kerala’s Kottayam district.

Ucanews.com reported that after the Jan. 14 verdict, a spokeswoman for the nun said she would appeal.

Soon after the verdict, Bishop Mulakkal, who always maintained his innocence, rushed out of the court and thanked God.

“Praise the Lord,” he said while leaving the court premises along with family members who had accompanied him for the hearing.

Outside the courtroom, police made elaborate arrangements to control the crowds. Besides barricades, a bomb squad and dog squad were pressed into service to clear the court before the verdict, ucanews.com reported. Bishop Mulakkal had entered the courtroom through a back door to avoid the crowds and listen to the verdict.

He said the case against his client was “fabricated and there was no evidence to substantiate it other than the oral statement of the survivor nun.”

The nun was a former superior general of the diocesan congregation, which fell under the jurisdiction of Bishop Mulakkal in the northern state of Punjab.

The nun claimed the bishop raped her during his visits to the congregation’s house in Kuravilangad, a town in Kottayam district of Kerala.

Police officer S. Harisankar, who investigated the case, told the media he was disappointed with the verdict.

“This is an extremely unfortunate verdict. It is shocking for us. We had expected a conviction, fully. We will appeal. We had a lot of corroborative evidence. All the witnesses in the case were ordinary people,” he said.

Sister Anupama, a spokeswoman for the accuser, said the verdict was “quite unexpected.”

“We will continue to fight it until our sister gets justice, even if we have to die for it,” she added.

She said that the trial had gone well and the public prosecutor had done a good job. “The witness statements and other evidence were in our favor but still (we) did not know what happened,” Sister Anupama said.

Police arrested Bishop Mulakkal in 2018 after five nuns, including Sister Anupama, and rights activists launched a protest in Cochin demanding his arrest. He was later granted bail by Kerala High Court.

Police filed a 2,000-page charge sheet against the prelate, charging him with rape, harassment, wrongful confinement and criminal intimidation.

Bishop Mulakkal moved appeals from the trial court to the Supreme Court, the top court in the country, seeking directions to discharge him of the charges, but to no avail.

He subsequently stood trial, thus becoming the first Indian bishop to do so for rape.

NEXT: Ukrainian priests appeal for support as Russian threat grows