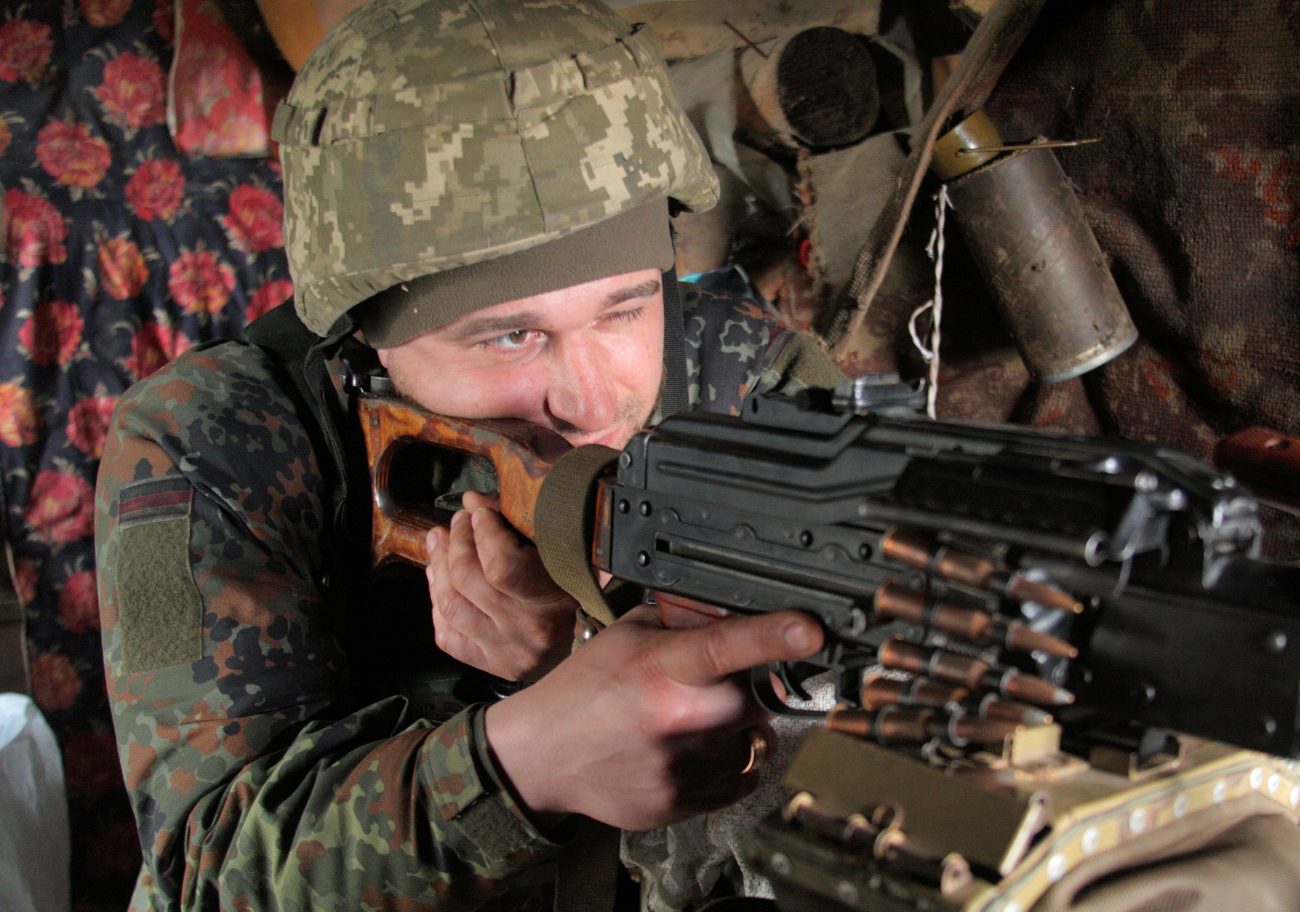 A member of the Ukrainian armed forces points a weapon at fighting positions on the line of separation from pro-Russian rebels in Donetsk April 16, 2021. Clergy in Ukraine are uncertain how a widely expected Russian invasion could affect Catholic life. (CNS photo/Serhiy Takhmazov, Reuters)

“While our TV news shows tanks and army units deployed on our borders, the war in eastern Ukraine is continuing — but the church in the West is saying little,” said Msgr. Gregory Semenkov, chancellor of the Kharkiv-Zaporizhia Diocese.

“As faithful Catholics, we’ve nothing against Russians and provide regular Russian-language Masses, while our bishops’ conference, being nonpolitical, has never taken a position on whether Ukraine should join NATO or the European Union. But these invasion preparations are posing severe hazards for us.”

The priest spoke to Catholic News Service Jan. 14 as talks between NATO and Russian officials, the first in two years, failed to reach agreement on Moscow’s demands for an end to Western military backing for countries formerly belonging to the Soviet Union.

Msgr. Semenkov said most Catholics believed a “major Russian show of force” was likely after the failure of East-West talks.

He told CNS that Ukraine’s Catholics were uncertain how Russian forces would treat their church, but added it had been agreed that priests and nuns should decide for themselves whether to leave or stay in the event of a “military aggression.”

Father Roman Krat, judicial vicar of Ukraine’s Odessa-Simferopol Diocese, said he also believed an invasion was likely, given the completion of Russia’s 750-mile Nord Stream 2 gas pipeline to Europe, good fighting conditions offered by frozen winter surfaces, and the improbability of a military response by NATO.

He told CNS that support for Russian President Vladimir Putin had fallen among Russian-speaking Ukrainian Catholics because of events in the occupied Crimea and Donbas regions. He also said it was expected Catholic clergy would be required to accept Russian citizenship to continue ministering if Russian troops invaded.

“Putin knows some Western countries, already completely dependent on Russian gas, would choose warm homes over caring about Ukraine,” he told CNS. “He also faces internal economic and social problems, and needs to divert public attention — to show Russia is strong and victorious under his leadership. Although there’s much bargaining and manipulation under way, these factors all point in one direction.”

“While we’re aware NATO has not agreed to Russia’s demands, we don’t know whether this will provide a pretext for direct action or for further bargaining,” he said. “But we do know there’s a real threat now, on a different military level than previously, so we’re seeking prayers for peace, as well as material help and support.”

“Our church has cautiously avoided pronouncing on Ukraine’s future alignments, believing this could negatively affect its future work,” Father Krat told CNS. “But if the Russian army occupies these territories, there’ll be a total change. The church is unlikely to be outlawed or forced to close its dioceses. But its clergy will plummet, as Ukrainian priests are forced out and Polish priests made to go home.”

In April 2014, Russian-backed separatists declared independent republics in Ukraine’s Luhansk and Donetsk regions, triggering a war that has left more than 14,000 dead. The international community still recognizes the regions as part of Ukraine.

Speaking in Moscow Jan. 14, Russian Foreign Minister Sergey Lavrov said a NATO commitment never to expand or deploy forces to Ukraine was essential for defusing tensions, although Western governments have rejected the demand.

Ukrainian Catholic Archbishop Sviatoslav Shevchuk of Kyiv-Halych, head of the country’s Eastern Catholic Church, told Poland’s Catholic Information Agency, KAI, Jan. 14 that there was a “strangely peaceful atmosphere” in the country, despite the border buildup, but also warned Ukrainians would “defend themselves and shed blood” if Russia invaded. 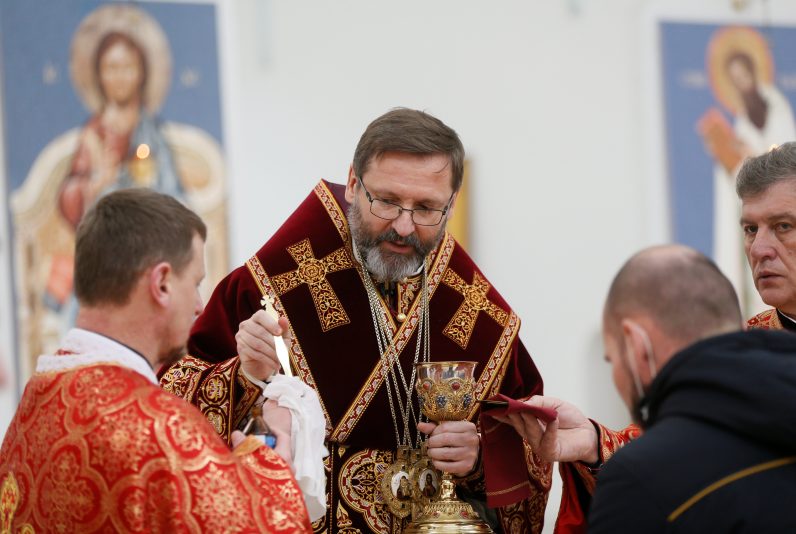 Archbishop Sviatoslav Shevchuk of Kyiv-Halych, Ukraine, major archbishop of the Ukrainian Catholic Church, celebrates the Divine Liturgy at the Cathedral of the Resurrection of Christ in Kyiv March 22, 2020. (CNS photo/Valentyn Ogirenko, Reuters)

NEXT: Synodality and ecumenism require walking together, say cardinals