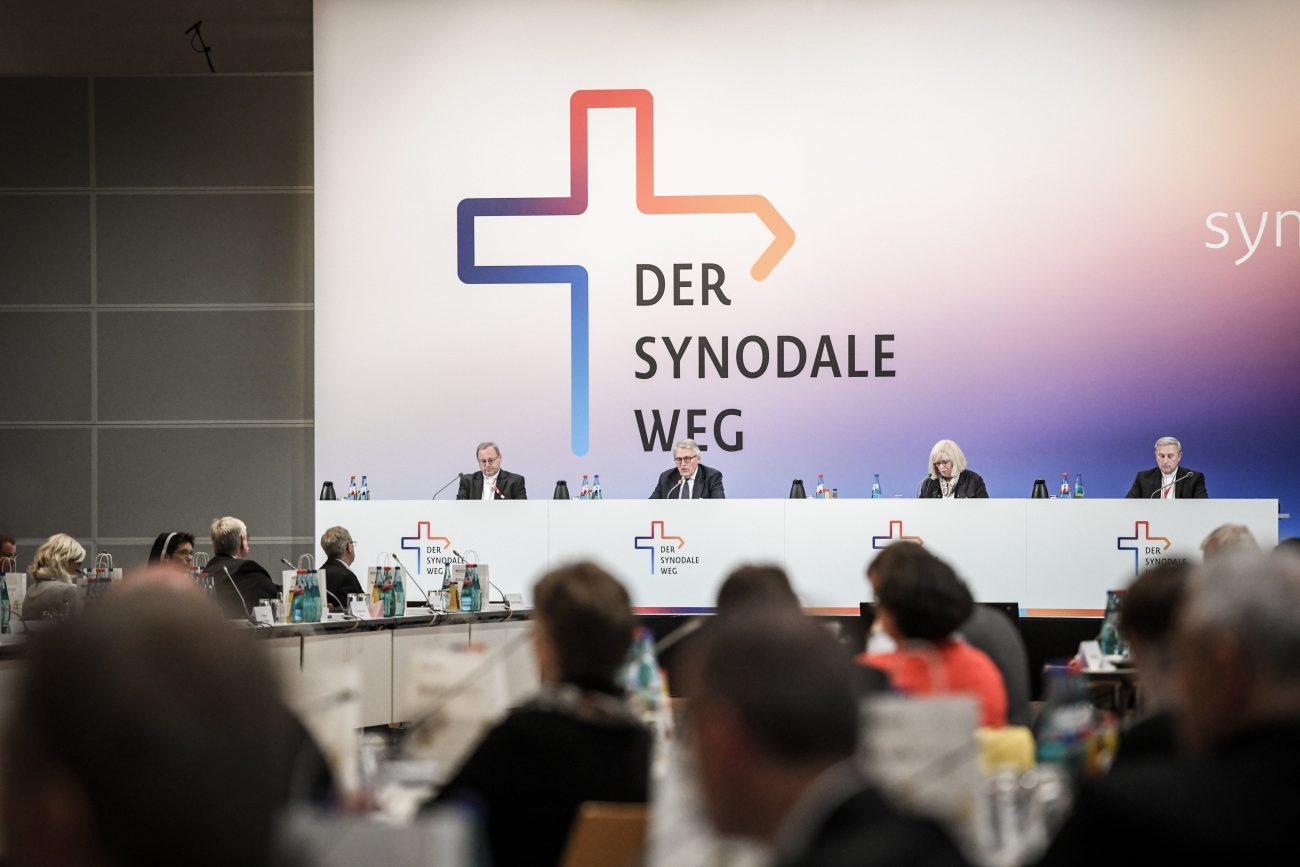 Leaders of the second Synodal Assembly are pictured during its opening session in Frankfurt, Germany, Sept. 30, 2021. At Pope Francis' general audience Jan. 5, 2022, a group of pilgrims presented him with a "reform manifesto" critical of the Synodal Path. (CNS photo/Julia Steinbrecht, KNA)

On the sidelines of the pope’s Jan. 5 general audience, representatives of the “Neuer Anfang” (“New Beginning”) initiative handed him a pamphlet containing their own statements on themes that are also dealt with in the Synodal Path consultations, launched by the German bishops’ conference and the Central Committee of German Catholics.

A member of the group said they had handed the manifesto directly to the pope because its views had no chance of being accepted by Synodal Path members in Germany.

In their manifesto, they thanked the pope for initiating a world Synod of Bishops on synodality and said the “Synodal Path in Germany is getting out of hand.”

“The joy of the Gospel” appeared to be getting lost in the “bickering of politicized groups,” the text said.

The manifesto and a “Letter from the Pilgrim People of God to the Pope” stem from an initiative launched by Bernhard Meuser, a German publicist, and Martin Brüske, a theologian who teaches in Switzerland.

The “Faith Manifesto,” signed by around 6,000 people from Germany and other European countries, contains nine theses. They include the legitimacy of the Synodal Path, the unity of the church, power, women, marriage, laypeople and priests as well as abuse. The manifesto sharply criticizes the demands of the Synodal Path, which amount to a “self-secularization of the church,” as Meuser told KNA.

The manifesto contains a set of proposals: Any reform must take place in unity with the universal church; there must be no separate national paths; power in the church must serve and be legitimate and transparent.

“There is indeed also abuse of power in the church,” it says. However, it adds that it does not want “a church of officials and functionaries.”

The sacramentality of the church must be preserved, as must the difference between clergy and laypeople, the manifesto says. Women’s abilities must be more strongly recognized; however, their non-admission to the priesthood is not discrimination, it adds. It also supports the special status of traditional marriage as a sacrament and opposes the blessing of same-sex couples.

PREVIOUS: Humility and trust: Finding the keys to the synodal journey

NEXT: Ordinary people called to be extraordinary Christians, pope says