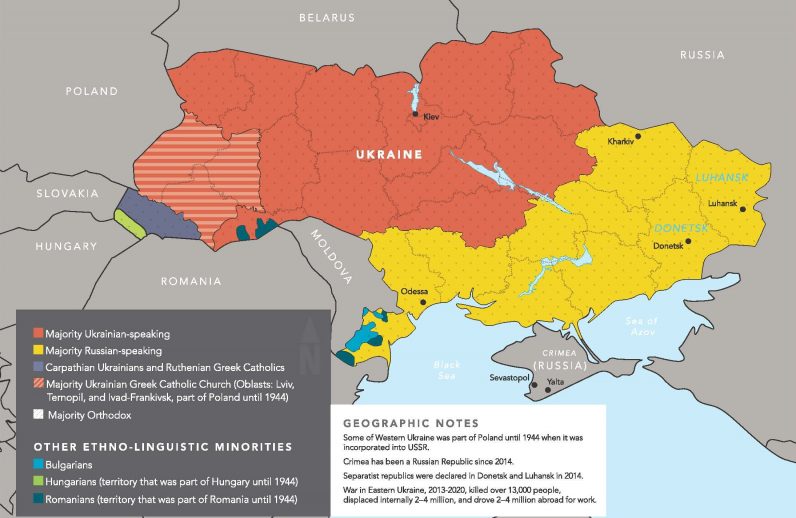 This is a map of Ukraine. (CNS photo/courtesy Victor Gaetan)

Thirty years after the dramatic breakup of the Soviet Union, tremors from that socio-political earthquake continue to reverberate through the vast terrain it once covered. An uprising in Kazakhstan earlier this month. Political strife in Belarus around its 2020 presidential election. Ongoing conflict at the Ukrainian-Russian border, more ominous by the day.

How does the church understand these confusing events? It orients itself in three instructive ways: as a local actor, as a neutral mediator, and as a peace-seeking faith. Pope Francis — and Catholic teaching stretching back to Christ — believe dialogue is a key to resolving misunderstanding, whether within families or on the cusp of war.

Looking at examples of the church’s recent and unfolding actions in Central Asia and Eastern Europe gives insight into the unique Catholic mission to serve the common good, not just the faithful. It also helps explain why Washington and Rome diverge in perceptions of what’s wrong.

Catholics live in each of the 15 former Soviet Republics, so the church is first, local. Giant Kazakhstan, as big as Western Europe, sits in a hot spot between two ambitious powers, Russia and China. It’s a prosperous place, loaded with oil and gas reserves — and some 100,000 Catholics.

Kazakhstan was suddenly in the spotlight in early January when riots, ostensibly over gas prices, spread across the country. The Kazakh president called on the Collective Security Treaty Organization, a regional military alliance led by Russia, to quell the uprising. With the internet interrupted and few independent journalists in country, the conflict remained largely a mystery, even after life returned to normal.

Enter Bishop José Luís Mumbiela, president of the country’s episcopal conference, speaking on an Italian webinar regarding the church in Kazakhstan. A Spanish-born missionary priest living in Almaty since 1998, he gave an account of January’s events, including ill-intentioned efforts to co-opt popular grievances. The prelate saw snipers strategically positioned and “people militarily prepared for a major action.”

Bishop Mumbiela confirmed the Kazakh president’s assertion that rioting morphed into an attempted coup d’état. It’s a trustworthy account because the priest is independent and a local citizen. He embodies Pope Benedict XV’s rule that church leaders should remain “among the combatants instead of keeping away and preaching peace and concord from a distance.” 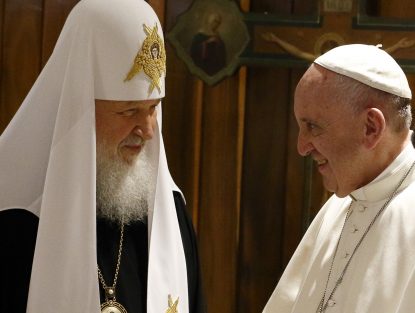 Sharing witness is one thing, becoming a flashpoint in a national drama is different. To preserve neutrality, the church strives not to take sides in political or military contests.

Archbishop Tadeusz Kondrusiewicz of Minsk, Belarus, was associated with opposition to President Alexander Lukashenko, especially after the prelate warned of potential civil war following a 2020 presidential election that Lukashenko won by a dubious 80%.

Soon after, Belarusian authorities blocked the archbishop from returning from a pilgrimage to neighboring Poland; they kept him out of the country for four months. As the crisis in Belarus took a religious dimension, Archbishop Paul Gallagher, the Vatican’s foreign minister, traveled to Minsk and shuttled for four days between the government and Catholic leaders to defuse tension.

As a result, Archbishop Kondrusiewicz was finally allowed home for Christmas, and the Vatican promptly announced his resignation. He has been quiet ever since.

“Vatican neutrality is oriented toward trying to bring parties together,” not divide them against each other explained Jesuit Father Drew Christiansen, a Georgetown scholar.

The context for Archbishop Kondrusiewicz’s sacrifice was Rome’s cultivation of positive relations with Belarus, where about 15% of the people are Catholic. Cardinal Pietro Parolin, Vatican secretary of state, visited in 2015, describing it as “a helpful country, especially in the context of the events in Ukraine.” Minsk was the site of 2014 and 2015 negotiations among France, Germany, Russia and Ukraine.

The Holy See still believes the Minsk II agreement could unlock peace between Ukraine and Russia — if its elements were respected and implemented by both sides. For example, the text specifies that the Donbas region in Eastern Ukraine, where sporadic fighting continues, should become an autonomous region.

But the Ukrainian government has taken no steps toward decentralizing local government. In fact, the citizens of Donbas, mostly old people, are effectively disenfranchised: They can’t vote or receive pensions; they live, impoverished, in a stateless, frozen war zone. These are the people Francis wants church officials in Ukraine to focus on.

Like his two predecessors, Pope Francis and his diplomatic team have prioritized closer ties with the Russian Orthodox Church as part of an ecumenical commitment flowing from the Second Vatican Council.

At their 2015 meeting, Russian President Vladimir Putin reassured Pope Francis that he would encourage more collaboration between the two faiths. Eight months later, in 2016, Pope Francis and Russian Orthodox Patriarch Kirill of Moscow were face to face in an airport lounge in Havana — the first such encounter ever between leaders of these two faith traditions, the two largest Christian churches in the world.

Pragmatic objectives were at the heart of this event, including the need for Catholics and Orthodox to unite to save Christianity in the Middle East and their intention to push back against secular materialism in the West — both evoked in a joint agreement. Also mentioned was “hostility in Ukraine,” without assigning blame. Pope Francis had already described the Ukrainian conflict as “fratricidal violence,” rather than a Russian invasion.

Friendship has grown between Pope Francis and Patriarch Kirill since that meeting. Now, discussions are underway for another meeting in 2022, which is certainly related to the pope’s conviction that religious leaders can help shape the moral calculations of secular leaders.

Peace is an aspiration Patriarch Kirill shares with the pope, a goal they should strive for together. During the Christmas service, on Jan. 7 in the Russian calendar, the patriarch thanked Pope Francis for a fraternal message and added, “Hopefully, these relations will translate into many and many kind joint actions, including those aimed at achieving peace where there is no peace today,” according to Tass, a Russian news agency.

But nation states, in Pope Francis’ view, are driven by interests, whether military, economic or national pride. The pope is no more suspicious of Russian imperialism than what he sees as U.S. imperialism –both Moscow and Washington are equally self-interested and capable of being destructive.

Without naming either country in a speech to diplomats Jan. 10, it sounded like Pope Francis had both Russia and the United States in mind when he bemoaned “proxy wars” fed by an “abundance of weapons” and “the unscrupulousness of those who make every effort to supply them,” thereby exacerbating conflict. On Jan. 21, the U.S. Embassy in Kyiv announced on Twitter 200,000 pounds of “lethal aid” for Ukrainian fighters.

Rome plays a diplomatic role with an aerial view: The Holy See often sees through the eyes of multiple parties at odds with each other and has empathy for these diverse perspectives.

For instance, on Jan. 23, Pope Francis called for a day of prayer for peace in Ukraine and warned that a possible Russian-Ukrainian conflict could “strike a new blow at peace in Ukraine and put into question the security of the European continent, with even wider repercussions.”

“Those who pursue their own goals to the detriment of others despise their vocation as human beings, because we have all been created brothers and sisters,” he said.

Paulist Father Ronald Roberson, associate director of the U.S. bishops’ Secretariat for Ecumenical and Interreligious Affairs, explains, “When I was working at the Holy See at the Council for Christian Unity, we would receive reports from different nunciatures (embassies), and it was tremendously detailed information from the perspective not only of the nuncio (ambassador) himself but also the different parties within a conflictual situation.”

Rome’s ability to appreciate various perspectives is true in Ukraine.

Commentary found in mainstream media focuses on Russia massing some 100,000 troops on the Ukrainian border without exploring the roots of this conflict, especially agreements between the U.S. and Soviet Union regarding NATO.

“Russia is extremely sensitive about foreign military activity adjacent to its borders, as any other country would be and the United States always has been. It has signaled repeatedly that it will stop at nothing to prevent NATO membership for Ukraine,” explains former Ambassador Jack Matlock, who led the U.S. Embassy during the breakup of the Soviet Union.

“Gorbachev was assured in 1990 that the (NATO) alliance would not expand,” Matlock told CNS in a telephone interview.

The Holy See is highly aware of this Russian sensitivity, as well as the Russian conviction that the 2014 Ukrainian revolution was a coup d’état against an elected president sympathetic to Russia.

Former Georgetown professor Anatol Lieven, senior fellow at the Quincy Institute for Responsible Statecraft, echoes Matlock’s reminder that since the Monroe Doctrine was proposed in 1823, the U.S. has rejected any foreign power asserting itself near American borders. Similarly, Russian agitation over NATO entertaining a presence in Ukraine, right on its border, is predictable.

In a recent radio interview, Lieven notes that much current U.S. posturing vis-à-vis Russia is bizarre, since it is unlikely the U.S. would actually intervene in Ukraine and it is not even in U.S. interest to do so.

He proposes a solution employed in Austria in 1955, when the U.S. and Russia both withdrew troops, assuring the country’s independence and neutrality. In the end, “Austria developed a successful free market democracy.”

The Vatican, on the other hand, will rarely propose a specific solution to an international dilemma.

The Holy See believes in a process: “dialogue. Conflict will not resolve this, dialogue must,” summarizes Stephen Colecchi, former director of the International Justice and Peace office at the U.S. Conference of Catholic Bishops.

As Pope Francis said, despite “the deafening noise of war,” the solutions at hand are “dialogue and fraternity, two essential focal points in our efforts to overcome the crisis of the present moment.” 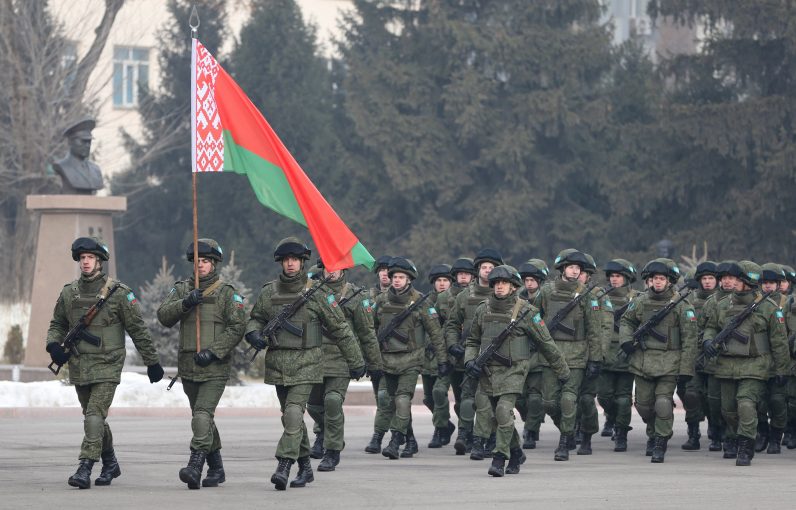 Belarusian servicemen take part in a ceremony in Almaty, Kazakhstan, Jan. 13, 2022, marking the beginning of the withdrawal of peacekeeping troops of the Collective Security Treaty Organization. Kazakh President Kassym-Jomart Tokayev had summoned the troops Jan. 2 to help quell riots that he branded a coup. (CNS photo/Pavel Mikheyev, Reuters)