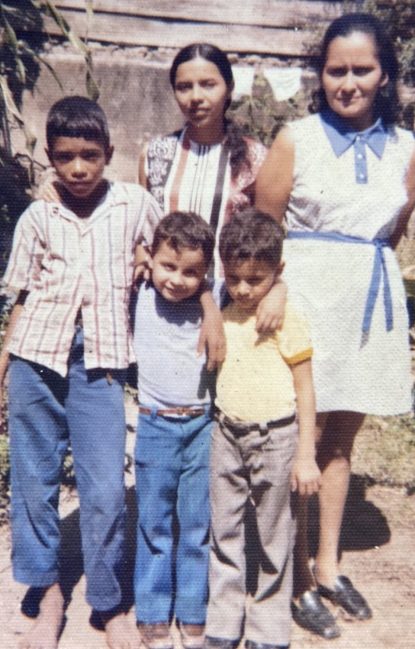 This undated photo shows Nelson Rutilio Lemus, left, who was shot and killed along with his pastor, Jesuit Father Rutilio Grande, and sacristan Manuel Solórzano, March 12, 1977, on the way to a novena. All three and Franciscan Father Cosme Spessotto were beatified in San Salvador, El Salvador, Jan. 22, 2022. (CNS photo/courtesy Archdiocese of San Salvador)

SAN SALVADOR, El Salvador (CNS) — Unlike the spotless image of many holy men and women, a depiction of one of the new martyrs of the Catholic Church looks anything but polished.

The boy is hunched a little. His cuffed pants are slightly too big for his small body. His shirt, improperly unbuttoned, hangs just a bit longer on one side than the other. Bullet casings are at the bare feet of the unpolished martyr.

That’s the image his parish in El Paisnal, El Salvador, presented to the world, with the message that the most simple and poor, like Nelson Rutilio Lemus, a teenage boy, are worthy of the grace of martyrdom. Lemus was assassinated in his rural hometown next to his pastor, Jesuit Father Rutilio Grande, and sacristan Manuel Solórzano, March 12, 1977.

The three, along with Franciscan Father Cosme Spessotto, were beatified Jan. 22 in an outdoor evening ceremony attended by their families — some from the U.S. and Blessed Spessotto’s native Italy — at Salvador del Mundo Plaza in San Salvador. Beatification is one of the final steps toward sainthood.

Salvadoran Cardinal Gregorio Rosa Chavez, who presided at the ceremony, placed the martyrs’ and the Catholic Church’s role into the context of the country’s civil conflict in the 1970s and 1980s, which ended with peace accords in 1992. The martyrs beatified were part of more than 75,000 civilians killed.

“Those of us who have lived this experience intensely, those who have experienced firsthand the drama of institutionalized violence, of the violence of the armed conflict and of daily violence, fill this square and its surroundings,” the cardinal said during the homily for the beatifications. “Of the four martyrs of El Salvador who have just been beatified, we can say what John (in the Gospel) affirms … that ‘they come from the great tribulation’ and ‘that they have washed their clothes and made them white with the blood of the Lamb.'”

The war and the period before it, El Salvador’s “great tribulation,” brought with it hatred, revenge, pain, destruction, terror, death, slander and stigmatization against defenseless people, he said, and the blesseds, like the poor, bore the brunt of its calamities.

Blessed Spessotto was shot point-blank as he prayed inside his church June 14, 1980. A bullet hole from the attack remains inside the church.

Blessed Grande’s car was ambushed on the way to a novena. His assassins left his body and that of his companions, a teenager and an elderly man, riddled with so many bullets that parishioners had to carry them in blankets to keep their corpses from falling apart.

“In Latin America, martyrdom is related to the experience of the Gospel and the doctrine of the church above all after the Second Vatican Council,” and its adaptation to the realities the church in the region was facing, Cardinal Rosa Chavez said.

The poverty and injustices suffered by Blesseds Lemus and Solórzano — but also their devotion to remain with a pastor whose life was in danger — represented “a window to peer into the reality” of what the Book of Revelations calls “a great multitude that no one could number,” a nod to all Salvadoran lay Catholics who died and disappeared in the war, Cardinal Rosa Chavez said.

To the criminals who took the martyrs’ lives, “we want to say to them … that we love them” and ask God that they repent and have a change of heart, the cardinal said, “because the church is not capable of hate. The only enemies (the church) has are those who declare themselves so.”

In his native El Paisnal, Blessed Grande defended and denounced crimes and injustices against his flock of rural poor, who didn’t have enough to eat even after their arduous work in cotton, sugar cane and coffee fields.

“Padre Cosme” did the same in San Juan Nonualco, where he confronted soldiers who had taken over a church and taken priests hostage. Seeing the poverty and meager wages of his parishioners, he tried to teach them to harvest grapes as a way of changing their economic fortunes.

Beyond their denunciations, the priests were known for their kindness toward the poor, but their family members recalled the personal moments with them.

“My family members, my father and aunts and uncles, have always considered Father Cosme a saint for his way of being: his simplicity, his … being completely available to everyone and always with a smile on his face, never angry,” Giovanni Tellan, Blessed Spessotto’s nephew, told Catholic News Service Jan. 21 as he visited the convent in San Juan Nonualco where his uncle lived for almost 30 years.

When Blessed Spessotto last visited Italy in 1978, he asked if he could take Tellan, then a boy, with him to El Salvador.

“My mom didn’t want to because I’d had a heart operation and she said there weren’t suitable hospitals (in El Salvador) … ‘and then you take him into the middle of the war’ and she did not let me come,” Tellan told CNS. “Father Cosme, with a smile, said to her, ‘Look at me, nothing has happened to me.'”

Tellan said being able to attend his uncle’s beatification in the country he so loved  fulfilled Blessed Spessotto’s wish.

At the convent where Blessed Spessotto lived, Tellan kneeled in front of a glass box that protects the blood-stained habit his uncle was wearing when he was assassinated. It has a hole in the back from one of the bullets that took his life. Tellan kissed his hands and pressed them again the box, then wiped away tears.

Blessed Grande, as well as his companions, also had family members in the crowd of several thousand.

“There’s a sense of great joy and gratitude that my tío (uncle) Tilo will join the communion of saints,” his niece, Ana Grande, told CNS after the ceremony. “As a family, we pray that his life brings peace and a sense of justice to all.”

Mercy Sister Ana María Pineda, a theologian from the U.S. also related to the Jesuit by marriage, told CNS at the beatification that the moment was an affirmation that Blessed Grande, who was called a communist, even by members of the church, mattered.

“What he did was in accordance with the Gospel, so there should be no question of how he lived in his life, and how he died, and for what he died. He died for the love of the people,” she said.

She called on others to continue the peace and justice he fought for and said his beatification should be a beginning of what a just society in El Salvador should be, “and the place of the church, and her role of making sure that the Gospel is lived out,” she said.

“It doesn’t mean that the work is finished or that his message is old and that it doesn’t have any relevance for today. It does and maybe, in some ways, it has more relevance because of what we see … the lack of equality and fairness and just government. The church has to continue to be on the side of the poor and the vulnerable and be a voice protesting what is unjust.”

“They stood by the poor, bearing witness to the Gospel, truth and justice, even to the shedding of their blood,” he said. “May their heroic example arouse in everyone the desire to be courageous agents of fraternity and peace. Let us applaud the new blesseds!” 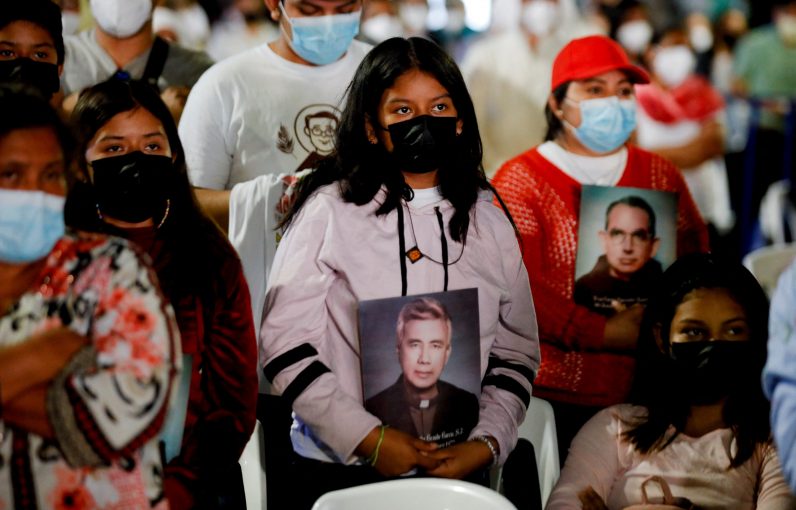 NEXT: Pope confers ministries of lector, catechist on lay women and men