TYRE, Lebanon (CNS) — On the outskirts of Tyre, the ancient coastal city in southern Lebanon where Jesus preached, life now has become one of impoverishment, as it has for most of the population of Lebanon.

“For two years, our country has been in a terrifying economic crisis. Our families are living in great distress,” Maronite Archbishop Charbel Abdallah of Tyre told Catholic News Service. Most people’s “salary only allows them to live for two days.”

Lebanon’s financial meltdown has been characterized by the World Bank as one of the worst worldwide since the 1850s; nearly 80% of the population now lives in poverty. With soaring inflation, basic needs, even for the previously middle class, have become out of reach.

The value of the currency slid further to record levels the week of Jan. 10, triggering another rise in the price of bread, this time by more than 25%, and two consecutive increases in the cost of fuel. A fill-up for a standard car now exceeds the monthly minimum wage.

“We cannot ignore the hunger of the people,” Archbishop Abdallah stressed.

Battered by decades of corruption and mismanagement, Lebanon has no social assistance from the state to help the poor, so the church has stepped in to fill the void. Like many other Catholic leaders, Archbishop Abdallah established economic committees in his parishes to address the needs of parishioners and has reached out to international organizations for help.

“The most generous was Aid to the Church in Need,” the archbishop said.

The organization has funded food boxes for 1,500 of the neediest families of 20 parishes in the Maronite Archdiocese of Tyre, in a predominantly Muslim area. Each box contains cooking staples. With the currency depreciation, the $40 value of the contents is equal to three months’ salary for those earning the national minimum wage.

Families will receive a food box every two months for eight months. 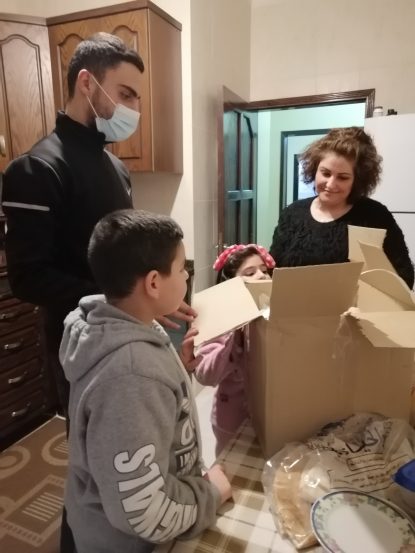 Rana Assaf and her children receive a food box funded by Aid to the Church in Need in the Maronite Archdiocese of Tyre, Lebanon, Jan. 12, 2022, in response to the country’s dire economic crisis. (CNS photo/Doreen Abi Raad)

At the Maronite Church of the Holy Family about 20 miles from Tyre, parish volunteers had packaged the goods in the 1,500 boxes. The diocese had procured the items at the lowest possible bulk rate, Archbishop Abdallah said.

As volunteers loaded food boxes onto pickup trucks for the first distribution, the archbishop expressed his gratitude for international help and said, “The families are going to breathe a little again.”

In the village of Addousiyeh, Nohad Dagher, a widow in her late 70s, was one of the first beneficiaries. She has been homebound since she fell and injured her hip two years ago.

“I use the walker to move, from here to there,” she told CNS, as she sat on the edge of her bed, gesturing around her single-room home, about 400 square feet, that serves as a combined kitchen, living room and sleeping area.

To reach the outdoor bathroom attached to the tiny old house, Dagher must navigate her walker through the winter chill and heavy rains.

It’s the home where she and her late husband began their married life and raised their son, who lives in Europe. Dagher has no income or savings, but her son is able to send her a small amount of money periodically.

She also receives help from her parish, the Maronite Catholic Church of St. Joseph of the Sea, directly across the street. Dagher said she misses going to daily Mass there, but the pastor, Father Geryes el Hajj, regularly brings her Communion.

“I pray all day at home,” she says, her eyes shining.

Holy images grace her walls and mirror; they include St. Therese of Lisieux, the Sacred Heart of Jesus and Lebanon’s SS. Charbel and Rafka. Rosary beads coil her bedposts.

“It’s a very blessed house,” she said, noting that, before St. Joseph’s was built, the village priest prayed with the villagers in the very same room.

That priest was the great-grandfather of Father el Hajj.

Down the street, the Assaf family, also parishioners of St. Joseph’s, live on the third floor of a fairly new residential building. Their two-bedroom apartment reflects what once was a middle-income lifestyle.

Before the crippling economic crisis, the husband’s monthly salary as an army employee was worth $1,300, adequate to cover the family’s expenses. With the fall of the Lebanese currency, that salary is now equal to about $75 a month.

“I never imagined that we would be in need,” Rana Assaf told CNS.

“I used to prepare good meals for my family: meat, chicken or fish. Now we can only afford chicken maybe once a month.” Meat and fish have now become totally out of reach, as is typical for Lebanese households.

A cheerful smile masked the worry in her eyes, as she opened her food box, filled to the brim with essentials for cooking. Her two children, 10 and 6, looked on excitedly.

“We are so happy the church is helping us,” she said.

“We have faith, and we know that if we need something, the church is always there to help us,” her husband added.

Their pastor, Father el Hajj, described the crisis in Lebanon as “a catastrophe.”

“This situation is temporary, and we will continue,” he said.

The 29-year-old priest, ordained less than a year ago, chose to live his vocation in the village of his ancestors, although he grew up in the Kesouran area of Lebanon, north of Beirut.

“I want to help my people,” Father el Hajj told CNS. “I try to do my best to give people hope. It’s very important to help them to find God in this desperate situation.”

NEXT: Pope declares St. Irenaeus a doctor of the church